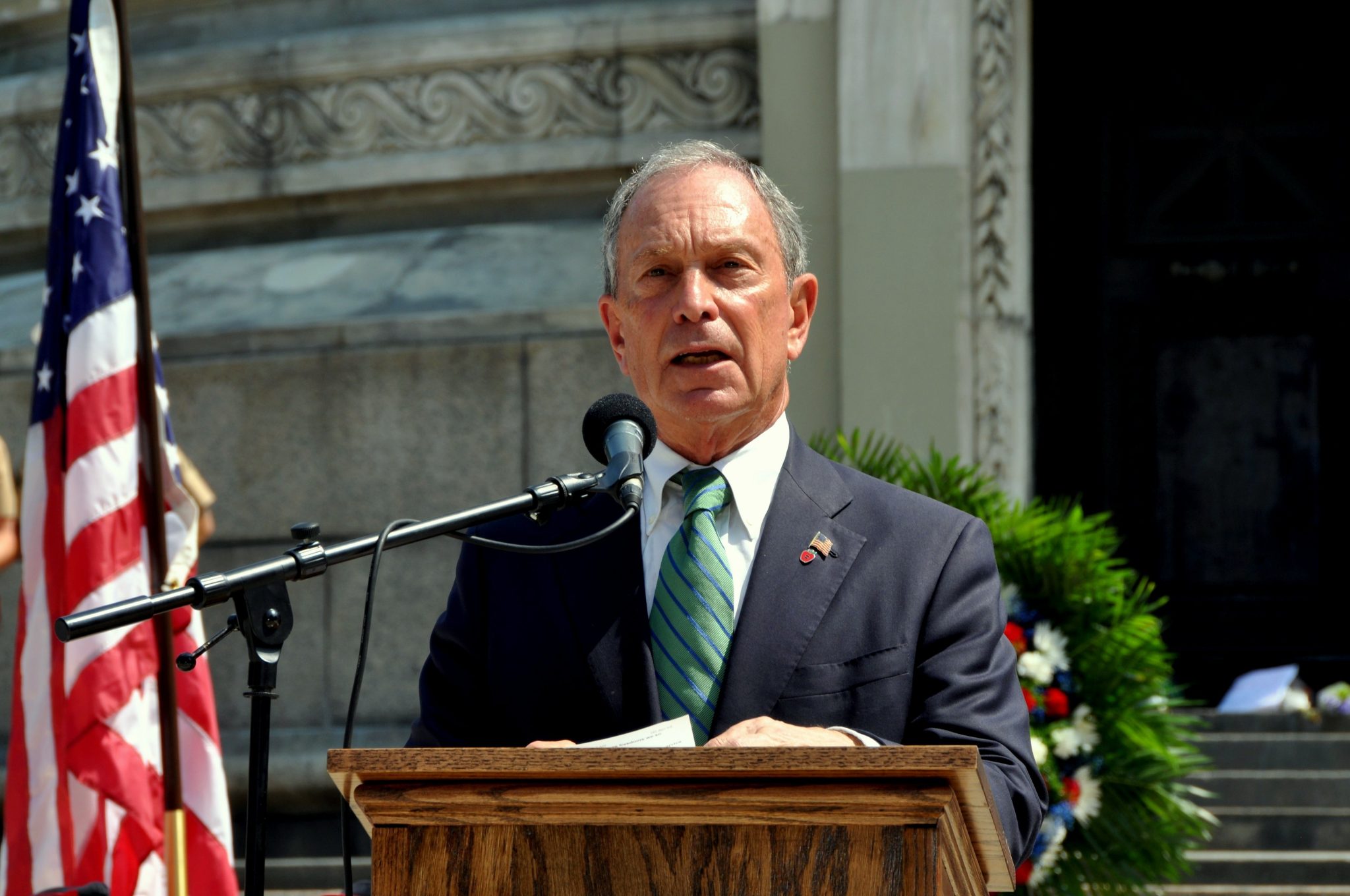 More Politics
Sign Up to receive Our Latest Updates!
Register
Hot Off
The Press
Political Hay
Court Throws Farmers Into Overtime Sudden Death
by Dillon Honcoop
Hither and Yon
China Is at War With the World, And It’s Escalating
by Scott McKay
The Right Prescription
Neanderthal Thinking Is Good for Public Health
by David Catron
Special Report
The Walls Close In on Cuomo
by Jeffrey Lord
Drawn to Humor
The Long Arm of HR 1
by Patrick Cross

Establishment Democrats who had hoped that Michael Bloomberg could ride to their rescue might need to start looking for another plan. The former New York mayor got kneecapped this week when recordings surfaced of his previous remarks about race, crime, and economics that make Bloomberg look guilty of the kind of “hate” that Democrats routinely accuse Republicans of perpetrating. Desperate to stop socialist Bernie Sanders from winning the party’s presidential nomination, Democrats are now reckoning with the consequences of their habitual rhetoric of racial blame.

Having endorsed the anti-police agenda of the “Black Lives Matter” movement, Democrats won’t find it easy to defend Bloomberg’s record as mayor. Even if the billionaire’s lavish spending could buy him the party’s nomination — an untested proposition — Bloomberg’s record on racial issues would make it difficult for him to play the race card against President Trump in the general election campaign. Does anyone really think Democrats can win without the race card?

The release of Bloomberg’s recorded defense of “stop and frisk” policies triggered still more panic among Democrats already in a frenzied state of fear (see “The Great Liberal Freakout Has Begun”) over the success of Sanders. The Vermont senator emerged victorious in Tuesday’s New Hampshire primary, where the establishment candidate, former Vice President Joe Biden, finished a weak fifth place. Not since Ed Muskie got blitzed by George McGovern in the 1972 New Hampshire primary has a Democrat front-runner fallen so far so soon as Biden. The ripple effects of Biden’s failure were succinctly described by liberal journalist Jonathan Chait:

Biden has run for president three times. He has not yet managed to finish higher than fourth in any primary or caucus.…

If not for Biden, a mainstream liberal Democrat might well have begun to consolidate support of a party establishment that is not looking for a candidate who will embrace wildly unpopular policies and a wildly unpopular socialist label while emphasizing transformative economic change in the midst of the best economy in a generation.…

Biden’s campaigns in 1988 and 2008 ended in disaster for Biden. His 2020 campaign is going to end in a disaster for the whole party.

Like Biden, Massachusetts Sen. Elizabeth Warren’s campaign is now obviously doomed after New Hampshire, where she finished a dismal fourth place. With Sanders very likely to win the next contest, the February 22 Nevada caucus, the “Anybody But Bernie” faction within the Democratic Party is running out of time to find a consensus alternative before the March 3 “Super Tuesday” contests. South Bend, Indiana, Mayor Pete Buttigieg and Minnesota Sen. Amy Klobuchar both did well in New Hampshire, beating Biden for the “mainstream” Democrat vote. But each of those candidates has weaknesses, and they are splitting the opposition to Sanders. Thus, the idea of Bloomberg as the white knight to rescue the party has a certain appeal to many Democrats who think Sanders can’t possibly beat Trump.

Unfortunately, Democrats have spent decades portraying themselves as the arch-foes of racism, and, during his 12-year tenure as the Republican mayor of New York, Bloomberg favored tough-on-crime policies that black activists deplored. This was especially true of the NYPD’s “stop and frisk” tactic, of which Bloomberg was a staunch proponent. A recording of his February 2015 remarks at the Aspen Institute had Bloomberg defending the policy:

Ninety-five percent of murders, murderers and murder victims fit one M.O. You can just take the description, Xerox it, and pass it out to all the cops. They are male, minorities, 16-25. That’s true in New York, that’s true in virtually every city.… And that’s where the real crime is. You’ve got to get the guns out of the hands of people that are getting killed. So you want to spend the money on a lot of cops in the streets. Put those cops where the crime is, which means in minority neighborhoods. So one of the unintended consequences is people say, “Oh my God, you are arresting kids for marijuana that are all minorities.” Yes, that’s true. Why? Because we put all the cops in minority neighborhoods. Yes, that’s true. Why do we do it? Because that’s where all the crime is. And the way you get the guns out of the kids’ hands is to throw them up against the wall and frisk them.… And then they start … “Oh I don’t want to get caught.” So they don’t bring the gun. They still have a gun, but they leave it at home.

This might not be the most eloquent or accurate defense of “stop and frisk,” but Bloomberg was basically correct in describing the tactic that proved so effective in reducing New York’s crime rate: Find out where the violence is happening and swarm those neighborhoods with cops on the lookout for people matching the description of the suspects. If your goal is to save innocent lives by getting criminals off the streets, “stop and frisk” works. Democrats, however, care less about public safety than they do about “social justice,” a worldview in which drug-dealing gang-bangers are somehow imagined to be victims of racial oppression. To Democrats, it doesn’t matter that most of the people killed in urban violence are the same race as the perpetrators; what matters is pandering to the vocal handful of grievance-mongers who demonize police as symbols of white supremacy.

That was the essential message of the “Black Lives Matter” movement: Cops are bad because our laws are an expression of racism, and therefore it’s wrong for any black person to get arrested, ever. The sponsors and organizers of “Black Lives Matter” claimed their movement was about highlighting police brutality. But from its formation in 2014, during the controversy in Ferguson, Missouri, the movement amplified crude and hateful anti-law-enforcement sentiments. Democrats applauded this cop-hating rhetoric, even when it led to riots, because they hoped “Black Lives Matter” would help boost turnout for the 2016 election.

Going all in on this anti-police message may have backfired for Democrats, boosting white working-class support for Trump in 2016, but that’s hindsight now. What matters to Democrats desperate to keep Bernie Sanders from claiming the 2020 nomination is finding a “mainstream” alternative. That they would be willing to accept an ex-Republican like Bloomberg is testimony to just how desperate they are. Yet their hoped-for billionaire savior is on the wrong side of the “hate” equation, as delineated by Democrats in recent years. When audio of Bloomberg’s 2015 Aspen remarks surfaced on Twitter, CNN’s Cristina Alesci quickly identified the source, black podcaster Benjamin Dixon, as a Sanders supporter. It was “important context,” according to Alesci, to note that “the podcaster and the writer that released this sound is clearly a Bernie supporter” who is “very anti-Bloomberg.” Alesci continued, “We don’t know how he got the sound to begin with.… A lot of questions are being asked especially on the timing of this.”

Turning Bloomberg’s embarrassment into an anti-Sanders conspiracy theory probably won’t work. What remains to be seen is just how many delegates Bloomberg will get on March 3 after spending untold millions to saturate TV markets in Super Tuesday states. For Democrats who had hoped he could be the solution to their problems, Bloomberg might actually make their problems worse. Selling out to a billionaire racist? That’s probably not a good look for Democrats.

Robert Stacy McCain
Follow Their Stories:
View More
Robert Stacy McCain is the author of Sex Trouble: Essays on Radical Feminism and the War Against Human Nature. He blogs at TheOtherMcCain.com.
Most Popular
1
Special Report
Derek Chauvin’s Trial: Countdown to a Kangaroo Court
by George Parry