Among the Intellectualoids,Top Story Black Lives Matter,Joe Biden Wildlife Society Supports BLM, Gets Real World Consequences - The American Spectator | USA News and Politics
Menu
Among the Intellectualoids
BLM and The Wildlife Society: Real World Consequences of the $$ Kind
Slandering America sometimes comes with a price. It should.

by Larry Thornberry
Berkeley headquarters of the Sierra Club in 2017 (Todd A. Merport/Shutterstock.com) 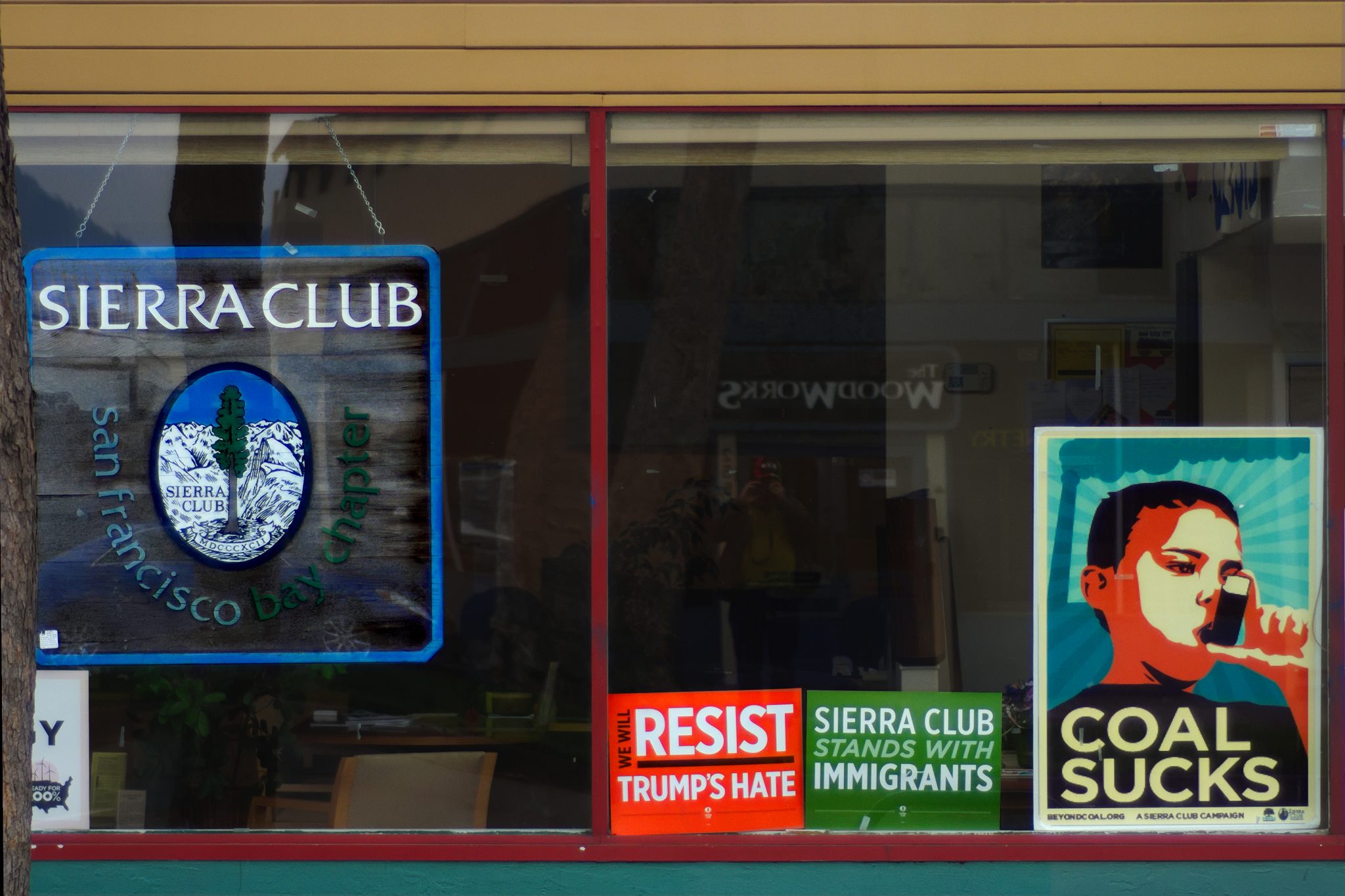 An ostensibly non-political, run-of-the-mill professional society recently leaped into left-wing politics, endorsing the current insurrection based on the systemic racism hoax, and in the process kissed off nearly a million bucks. Serious money that could have been used for its legitimate functions. More people should do what my patriotic friend did. I’ll elaborate, but first a little background.

The Wildlife Society has given a big wet tongue kiss to Black Lives Matter and has gone all in on the slander that America is a racist hell.

We’re all familiar with those wise and aphoristic rules that help clarify our lives. Some of these have to be refined and brought up to date when culture evolves. Or, as in recent years, devolves. A case in point is the updated, post-everything Gresham’s Law. No longer restricted to monetary matters, it now reads: “The truly crappy drives out the second-rate.” (See current entertainment, education, public discourse, et al.)

Others maxims have held up well over time, including Ben Franklin’s rule for dating, to wit: “Early to bed, early to rise, and your girl will go out with other guys.”

A far more serious rule, and one that promises to remain iron-clad for all time, is the dispiriting O’Sullivan’s Law. John O’Sullivan is a widely published and venerable British journalist, currently editor at large for National Review. It’s his melancholy observation that “All organizations that are not explicitly right-wing will become left-wing over time.”

Sadly, our John is spot on. We’ve all seen the drift to port on the part of academe, the performing arts, the mainstream media, corporate America, sports leagues, charitable foundations. Old Henry would roll over in his grave if he knew what the Ford Foundation finances now. These institutions, all center or right within living memory (at least within mine), all now list heavily to the left.

Even environmental organizations, which one would expect to confine themselves to issues concerning clean air and water, preservation of wildlife, or other matters at least tangentially related to the environment, have become pressure groups for the Left’s broad agenda.

The poster boy for this enviro bait and switch is the Sierra Club, an upscale Earth-worship cult based in California (where else?), which claims a membership of about three-quarters of a million. It has an annual budget larger than the GDP of a significant fraction of the countries in the UN. Not satisfied to whoop up crackpot environment restrictions that would in short order make a third-world country out of the United States, the Club is now all in on the Left’s full spectrum. In endorsing Joe Biden for president, the Sierra Club bangs on about Donald Trump’s reversing of many regulations that are expensive to implement but generate little or no environmental benefit. They also gig him for “divisive, racist tactics” (without, of course, naming these), which make it impossible for us to “advance social justice” (without, of course, saying what this is).

The Sierra’s endorsement statement is not free of humor, though in this case it’s unintentional. The Club backs Clueless Joe, their official statement claims, because “we need a champion, not a tyrant.” Champion Joe, they continue, “has shown he can listen to many voices” and “adapts when called to.” Boy, they don’t know the half of it.

In Sierra’s endorsement statement, board chairman Ramón Cruz informs us that Sierra’s membership was polled before the club chose a presidential candidate and found that “95 percent of our respondents want us to endorse Biden.” This should surprise no one familiar with Sierra, whose members lean heavily to Lexus lefties who find meaning in their lives by how caring more about the planet than your average bourgeois plod. Most of the club members I’ve tripped over — sweet but not very analytical people — know no more about the planet than someone chosen randomly out of the phone book.

The simplicities and absurdities of the Sierra Club could entertain us for a few thousand more words. But let’s move on to another, smaller, enviro group that is more down to Earth and, one would have thought, more apt to stick to its business than the more elite Sierra. This would be The Wildlife Society. Around since 1937, TWS claims a current membership of about 12,000 and concerns itself with, well, wildlife. On its “About” page, TWS says it mission is “to inspire, empower, and enable wildlife professionals to sustain wildlife populations and habitats through science-based management and conservation.” Clear enough for one to be justified in wondering what in the wide, wide world of sports this has to do with accusations that two-legged white Americans are behaving in a racist manner. But TWS has given a big wet tongue kiss to Black Lives Matter and has gone all in on the slander that America is a racist hell-hole where black citizens are routinely held down and otherwise abused by white citizens.

Below are some samples from a febrile posting by Kelly Holland, who identifies herself of president of the Western section of the Wildlife Society. The posting appeared under the headline “Western Section Stands With #Black Lives Matter.” (Of course black lives matter. Who the hell said they didn’t? But whether our Kelly knows the difference between the sentiment and the organization founded by self-styled trained Marxists that bears the same name is not at all clear.)

Kelly asserts that “what happened to George and Breonna and to Christian are not isolated experiences in the lives of a few Black people. Rather, these reflect a collective experience of Black people who wrestle every single day with a systemic problem of racism and oppression, and the tangle of associated misdeeds that pile on one after another.” What’s going on in America represents a “horrendous tide of endless suffering and senseless deaths.” She calls on her membership to not “sit on the sidelines but act. Stand up and speak up as an ally. To be silent is to be complicit.” It goes on, but you get the picture.

This kind of a statement would have been bold and helpful in 1962, when there was real systemic racism in America. Today it’s toxic and profoundly misleading.

And it was too much to take for a least one TWS member (and I hope many more). My friend, mentioned at the top, is a longtime wildlife professional, the founder and still owner of a successful environmental consulting and resource management company that operates mainly in New England. My friend, who, like me, is not in the first blush of youth, has been an outdoorsman and friend of wildlife all of his life, as has his entire family. A member of TWS since 1969, he cares enough about wildlife and believed enough in the society’s mission to have left a portion of his estate to them in his will (which we both hope will not have to come into play soon).

The amount involved in this bequest was not trifling. Thanks to hard work, long hours, smart planning, and entrepreneurial risks, my friend’s company has left him comfortably well off. Should the market not change much before my friend goes to that great duck blind in the sky, TWS would have been in for nearly a million dollars from my friend’s lifetime exertions. No more. After a few previous run-ins when TWS ventured into various left-wing social engineering concerns, my friend let the society’s CEO know in a letter that this was the last straw and that “I am instructing my attorney and financial manager to start legal work necessary to excise TWS as a beneficiary of my Trust. Congratulations, you just blew nearly a million bucks toward the endowment.”

This is a fine example for other red-blooded Americanos to follow. Crackpot policies should have consequences. The Wildlife Society wants its members to stand up against the faux plague of racism in America. Like my friend, a non-racist friend of wildlife, those who know this claim to be rubbish can and should stand up too. For good sense and truth when wild lies threaten America’s very existence. TWS should stick to the birds, the bees, and the bunnies. This is a fine way of reminding them to stay in their lane.