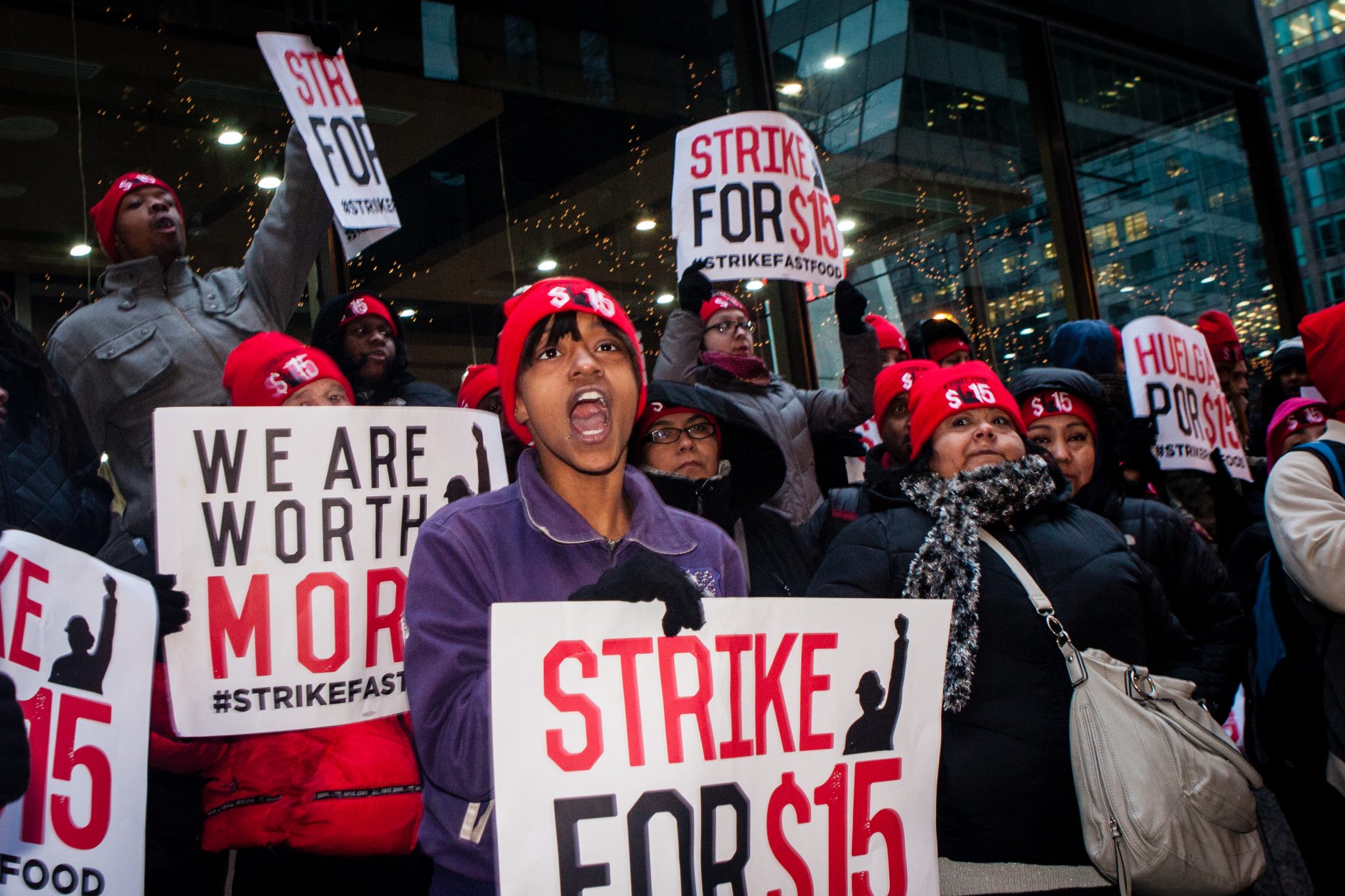 Today, over 50 unionized and progressive groups planned to strike in protest of police brutality against blacks and in demand of higher wages.

In over 100 U.S. cities, organizers expected tens of thousands to walk off their jobs in support of their agenda. Their demands, according to their website, are “justice for Black communities,” that elected officials “rewrite and reimagine the rules so that Black communities can thrive,” that corporations take steps to “dismantle racism, white supremacy and economic exploitation,” and that “every worker has the opportunity to join a union regardless of their job.”

“Strike for Black Lives” organizers include the American Federation of Teachers, National Domestic Workers Alliance, Amalgamated Transit Union, Fight for $15 and a Union, Progressive Democrats of America, and the Freedom Socialist Party.

The event also urges supporters to take the 8:46 pledge, in which they may take a knee or have a moment of silence at noon or walk off their job, all for eight minutes and 46 seconds, in memory of George Floyd.

Sen. Chuck Schumer (D-N.Y.) is set to join New York City strikers in front of Trump International Hotel to pressure the president and Senate to pass the HEROES act. The bill was passed by the Democrat-majority House and “provides protective equipment, essential pay and extended unemployment benefits to workers who have not had the option of working from home during the coronavirus pandemic,” AP reports.

The strike also targets fast-food corporations such as McDonald’s. Striking workers plan to march and rally at the McDonald’s in Ferguson, Mo., the city where the Black Lives Matter movement started with Michael Brown’s death in 2014.

“Companies like McDonald’s cannot on the one hand tweet that ‘Black Lives Matter’ and on the other pay us poverty wages and fail to provide sick days and adequate PPE,” said Angely Rodriguez Lambert, a McDonald’s worker, union member, and leader in the Fight for $15 group.

Lambert also claimed that McDonald’s “failed to protect us in a pandemic that has ravaged Black and brown communities across the country.”

Socialism has always been used to appeal to the working class to rise up in revolution, and the “Strike for Black Lives” is no outlier.

In Lambert’s view, McDonald’s isn’t doing enough until they bow to all the demands of their black and progressive employees. But Lambert forgets that employees are not forced into employment, and they accept their wages in return for their service and have no obligation to stay if they are unhappy.

In Minneapolis, the city where Floyd was killed, nursing home and airport workers will join together to demand $15 an hour wages as a part of the strike.

The president of Service Employees International Union (SEIU), also a backer of the strike, Mary Kay Henry said, “From our nation’s founding, white supremacy and economic exploitation have been inextricably linked. Today, in this national moment of reckoning, working people are demanding fundamental changes to America’s broken system.”

HospitalWrkersRising, a twitter account for Pittsburgh hospital workers backed by the SEIU, posted a video of a strike march today, with participants holding signs reading “Unions for All” and “Black Lives Matter.”

Sandra Ellington, a janitor from Ohio featured on SEIU’s press release for the event, said, “Despite all this pain, I’m hopeful because this time is different. This time is a movement! People don’t want to say it. I’m not shy: it’s a revolution!”

Another video posted of today’s strikes depict hundreds of people in the streets outside a McDonald’s in Durham, N.C., on their knees with raised fists.

The socialist nature of the strikes are clear from the demands for higher wages and paid leave. For example, Sen. Bernie Sanders, a self-described socialist, has promoted policies such as paid sick leave and vacation for all workers and a $15 minimum wage, which is identical to much of the demands of today’s strikers.

The progressive backers of the strike also reveal the campaign’s socialist connection. The Freedom Socialist Party, a supporter of the event, describes themselves as “feminist, working-class organization … fighting for an end to all capitalist exploitation and oppression. We work in labor unions, join in social-movement struggles, and take electoral positions and run candidates.”

Socialism has always been used to appeal to the working class to rise up in revolution, and the “Strike for Black Lives” is no outlier.

Though it seems appealing to many, socialism only ever ends with “poverty, misery, and tyranny,” wrote American Enterprise Institute (AEI) scholar and University of Michigan Economics professor Mark J. Perry in his essay “Why Socialism Failed.”

Today’s worker rebellion and strikes for higher wages indicate that this “Strike for Black Lives” is using the progressive racial justice platform to push its even more sinister one: socialism.