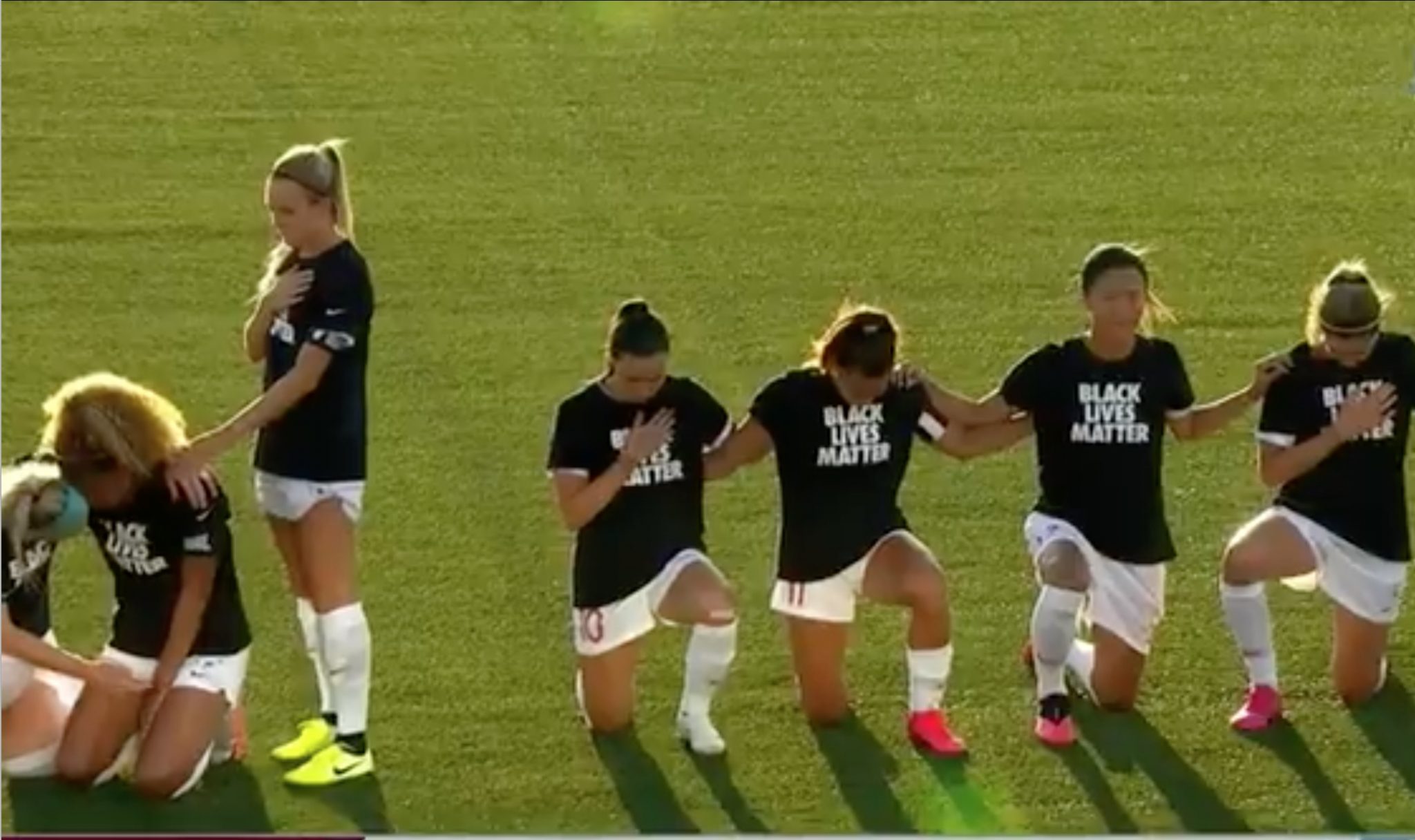 More Politics
Sign Up to receive Our Latest Updates!
Register
Hot Off
The Press
Political Hay
Sidney Powell Releases the Georgia Kraken
by Jeffrey Lord
The Current Crisis
This Election Stinks
by R. Emmett Tyrrell, Jr.
At Large
How the Assassination of Iran’s Top Nuclear Scientist Will Change the Middle East
by Steve Postal
Free the Market
Woke Nasdaq Should Mind Its Own Business
by Ross Kaminsky
Buy the Book
Big Tech’s Big Utopian Lies
by Clayton Trutor

If anyone was hoping that the return of the long-awaited Major League season would lift our spirits and bring us together, they had to be disappointed to learn that we are more divided than ever over the National Anthem kneeling debate. And although President Trump has not chosen to join the burgeoning #BoycottMLB movement on Twitter, the president has joined a growing number of disheartened baseball fans who are unhappy that their favorite teams are taking the knee. Even before the start of the season, President Trump tweeted that he was “looking forward to live sports, but any time I witness a player kneeling during the National Anthem, a sign of great disrespect for our Country and our Flag, the game is over for me!”

This is not a small issue. Rasmussen released a new poll of 1,000 Americans which indicates that “Americans are sending more negative signals than positive ones over the decision by many professional sports organizations to promote the controversial Black Lives Matter movement.”

The poll, released on July 31, revealed that more than 30 percent of American adults are less likely to watch sporting events that promote Black Lives Matter versus 21 percent who are more likely to do so. It is even worse for those “frequent watchers” who follow professional sports on television, in person, on the radio, or online once a week or less. Roughly 35 percent say they are less likely to watch events that promote the BLM protests.

All of this could have been easily predicted based on historical data collected since the earliest days of the Colin Kaepernick kneeling protests. Even the NFL, after making feeble attempts to blame the ratings dips on the “attention around our presidential election,” had to admit that the Kaepernick kneeling protests were negatively affecting viewership and attempted to address the problem. But, all of that has been forgotten in the current racial climate.

Continuing its commitment to exacerbating the controversy, the New York Times has published an article with the headline: “The Anthem Debate Is Back. But Now It’s Standing That’s Polarizing.” Claiming that “today, athletes may have to explain why they chose to stand, not kneel, during the ‘Star-Spangled Banner,’ ” John Branch, the Times writer, suggested that “the difference in 2020 as sports begin to emerge from their pandemic suspensions, is that nearly every professional athlete will be forced to choose a posture.” The Times built its argument on an interview with Charles Ross, a history professor and director of African American Studies at the University of Mississippi, who said, “You cannot sit around now in this post-George Floyd period we’re in and say ‘We’re going to continue to take this safe position.… Either you have an issue with racism or you do not.”

Some sports fans disagree. In fact, it is likely that most sports fans just want to enjoy sports again and would prefer to end the polarizing debates on the fields of play. The NFL found this out in 2016 but obviously has decided to revisit this debate yet again. League commissioner Roger Goodell recently showed support for the Black Lives Matter movement and reversed his statements on player protests, telling Branch, “We, the National Football League, admit we were wrong for not listening to NFL players earlier and encourage all to speak out and peacefully protest.”

In the meantime, professional athletes like 25-year-old Rachel Hill, a player with the National Women’s Soccer League’s Chicago Red Stars, who choose to remain standing and honoring the flag, are shamed. When attacked on social media, Hill responded that she chose to stand “because of what the flag inherently means for my military family members and to me, but I 100% support my peers.… I support the black lives matter movement wholeheartedly. I also support and will do my part in fighting against the current inequality. As a white athlete, it is way past due for me to be diligently anti-racist.”

Hill’s explanation wasn’t good enough for Branch, who concluded his article with the criticism that “Hill tried to have it both ways.… There is little room for such posturing.”

It is difficult to predict whether baseball fans will indeed be “less likely” to watch. In a sports-starved world still recovering from the COVID lockdowns, it is possible that fans will continue to crave the comfort of a good ball game and begin to overlook the politics. But it is also clear that these are perilous times for athletes and for fans.

3
Hither and Yon
Rudy and Sidney’s Krakentastic Spectacle, and What It Could Mean
by Scott McKay

5
Another Perspective
Why Trump Lost
by E. Donald Elliott