Another Perspective,Top Story Our Galaxy’s Monster Black Hole - The American Spectator | USA News and Politics
Menu
Another Perspective
Our Galaxy’s Monster Black Hole
Sagittarius A, the black hole at center of our Milky Way, will make you think twice about your place in the world.
by Gerald D. Skoning
Sagittarius A, the black hole in the center of the Milky Way (Event Horizon Telescope) 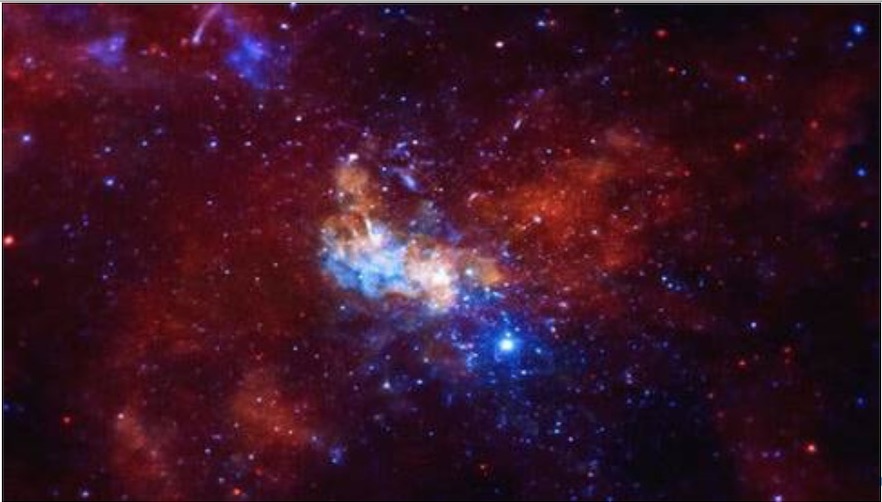 Astrophysicists have recently confirmed the presence of a massive black hole at the center of our own galaxy, The Milky Way. For this discovery, two scientists have been awarded the Nobel Prize in physics.

Astronomers agree that the universe is speckled with such dark monster black holes, including beasts lurking in the hearts of most galaxies that are millions and billions of times as massive as the sun. They’ve even taken a picture of one in a galaxy some 55 million light-years away.

Another giant black hole, a graveyard for the equivalent of 9.7 billion suns, more or less, lurks in a galaxy in the constellation Leo, a mere 331 million light years distant.

But closer to home, at the center of our Milky Way galaxy, 26,000 light years from here, there is a faint source of radio noise called Sagittarius A, which they have concluded is a gigantic black hole, with a mass equivalent to four million suns.

These black holes are found throughout our universe and are actively gobbling up huge stars. Other astronomers report that they have measured monster black holes, 10 times the size of our entire solar system, which have devoured billions of stars, suns, and their planetary systems.

No, don’t worry, this existential drama of the hungry black hole that weighs as much as 21 billion suns is taking place in a sprawling cloud of galaxies about 336 million light years away in the Coma constellation. That should put your mind at ease … at least for now.

Another giant black hole, a graveyard for the equivalent of 9.7 billion suns, more or less, lurks in a galaxy in the constellation Leo, a mere 331 million light years distant. It’s on the prowl, ready to devour every celestial body in its path.

These are two frightening monsters, but most likely they don’t pose an immediate threat of gobbling up our sun and solar system. At millions of light years distant, we are safe, for now.

But, astronomers also report that two giant black holes have been discovered at the center of a distant galaxy, called NGC 6240, born from the joining of two smaller galaxies, and those black holes are drifting toward a cataclysmic collision that will shake our universe to its core.

Where are those Star Trek heroes when we need them? Any Trekkie knows you need Warp Speed to escape the death grip of a black hole. Forget the perils of the coronavirus, global warming, and nuclear proliferation — the very existence of civilization is in dire jeopardy. These monster black holes are a real national security concern.

Chicken Little would really squawk about this one — “the sky really is falling.” Thankfully, scientists have reassured Chicken Little and the rest of us that this truly “universal” catastrophe won’t occur for hundreds of millions of years.

The terror of these black holes colliding some 400 million light years away is by no means immediate. In fact, our own Sun, which is by contrast only a small fraction of 1 percent of one light year distant (93 million miles), is expected to explode in a nova extravaganza in three billion years, and perhaps then collapse to form a small black hole of its own, dragging this Earth and our solar system into a gigantic super-massive planetary graveyard.

And, by then, who knows what the fate of our own species might be? Can we really survive our own shortsightedness and stupidity? Will we have blown ourselves from the face of this planet with a nuclear holocaust? Or will we have simply choked ourselves to death and snuffed out all of humanity in the toxins and greenhouse gasses that already signal our impending doom?

But hold on. In another study, a team of French and Argentine astronomers report a more immediate concern — the detection of a stellar black hole streaking at 250,000 miles per hour across the Milky Way, our own galactic home. They say a companion star is being dragged along with the black hole and is slowly being devoured by it. Darwinism on a universal scale.

This black hole express train, which is a mere 6,000 to 9,000 light years from Earth, might have been created by an exploding star in the inner dish of our Milky Way. The good news is that it’s around 8.4 billion miles from here; the troublesome news is that’s a small fraction of the 400 million light years (3,360 trillion miles) distance those other black holes are from Earth.

Alas, our immediate future will be prelude. Scientists say that the merging of two similar-size galaxies into NGC 6240, resulting in the creation of the two ominous black holes, is a prelude to the future of our own Milky Way. They say that in about four billion years our Milky Way and the beautiful nearby Andromeda galaxy will collide and merge, fusing their black holes into one giant Darth Vader–style destruction force. But relax, no problem. That’ll be a full billion years after we are snuffed out when our Sun implodes.

These are the cycles of life and death on a universal scale. Stars growing and expanding to supernovas, then collapsing in the grand implosive style to become voracious black holes, sucking everything in galactic range into the depths of super-massive death, devouring even the twinkles of light from dying stars. Birth, growth, development, expansion, old age, and death. Never with a whimper. Always with a cataclysmic bang, trailing streams of stellar galactic glory.

These are the milestone points on a universal timeline, measured in millions of light years, billions of years. The urgent crises of our daily lives shrink in significance when measured in intergalactic terms. On a starry night, we stare in wonder at the expanse of our universe overhead and worry not about colliding black holes and super cataclysmic death.

After all, our Sun will burn out in three billion years. And God only knows what we’ll do to ourselves in the interim.