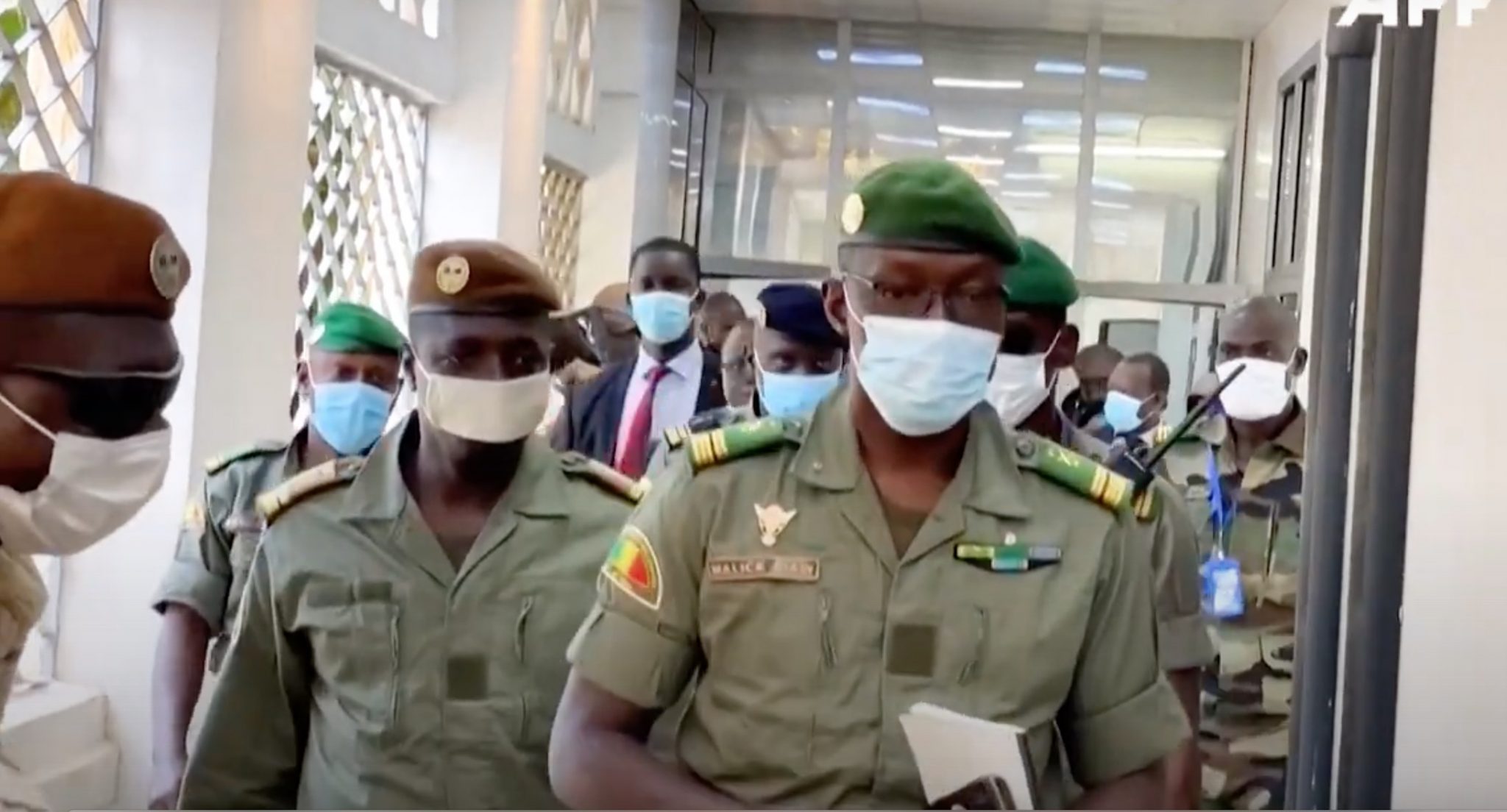 If the coup d’état in Mali was mentioned at either the Republican or Democratic Party conventions I did not notice, and even if it was, it is unlikely to turn up as a topic during the campaign.

Which is as it should be. Apart from the low profile foreign policy and international politics take in presidential contests, there are specific reasons why both parties would prefer not to discuss Mali or the larger Sahel region or even the African continent.

Mali is by no means the only country to have suffered the consequences of the Libyan adventure, and you might think the Republicans would have mentioned it as an example of what happens when you let Democrats run American foreign policy as well as American cities.

The Democrats do not want to bring it up because it reminds alert voters that their candidate was part of the inner circle that botched the Libya affair in 2011. The repercussions continue, causing pain and suffering to millions; indeed the events taking place this summer in Bamako (Mali’s capital) are but the latest after shock of an act of policy irresponsibility that a lit’ry man might compare to the behavior of Tom and Daisy Buchanan in The Great Gatsby.

In effect, if the Dems bring up Mali, they invite their adversaries to say, “Glad you mentioned it. What have you ever done for Africa and Africans — and their descendants in the New World (though admittedly this might be hitting below the belt, which gentlemen do not do) — except condemn them to misery and then avert your eyes?”

Say what you will about G.W. Bush’s foreign policy, he proposed specific policies for the Continent that were positive, such as one of the biggest contributions to the eradication of chronic diseases. On the political front, he supported the liberation of South Sudan from the Arab-African (and slave-trading) regime in Khartoum.

President Bush’s predecessor stood by and pretended the tribal war in Rwanda was neither genocide nor mass massacre, to avoid having to make a show of U.S. (or U.S.-backed) force that could have stopped it.

G.W. Bush’s successor chose a policy of “leading from behind” during the insurrection against the dictator Moammar Qaddafi. One thing does not necessarily lead to another, but the failed intervention has been followed by ten years of civil war just below Syrian levels of violence, inter-tribal wars supported by outside powers, serial kidnappings, rapine, and enslavement of children and women not only in Libya but across the Sahel.

Mali is by no means the only country to have suffered the consequences of the Libyan adventure,* and you might think the Republicans would have mentioned it as an example of what happens when you let Democrats run American foreign policy as well as American cities. They could even go low, though gentlemen do not do that, and remark that, in effect, the Dems pursued a policy that benefited Arabo-Berber highwaymen and slavers at the expense of black Africans.

It is rather more complicated that this, but the simple reason for Republican silence on this issue is that, for campaign purposes, they are focused on the incumbent administration’s successes in the Middle East (Jerusalem, Israel-UAE), not its dubious hesitations (supporting Saudi slavers in Yemen and abandoning Kurds stuck between Arabs, Persians, and Turks).

These are not issues for the kind of presidential-election year we find ourselves in. We are experiencing alternate realities where facts are denigrated and perspectives are myopic.

The Chinese Communists, who were rescued from economic ruin by successive U.S. and European policies in the post-Soviet years, have made big investments across Africa, including pertinently in the Sahel, where they hope to build infrastructure for the purpose of exploiting the resources — including the human ones — of this remote and in certain respects primitive region.

The region is destabilized by the aggressive activities of small bands of ruthless men with connections to organizations, some supported by outside powers, with criminal and religious intentions. The Sahel is infested with contraband and violence. It is also home to ancient peace-preferring people with tenuous allegiances to the states created in the 1950s-60s to replace Euro (mainly French and British) colonial administration.

Mali is at the center of the Sahel’s insecurity. In the wake of the Libya fiasco (advocated and defended by misnamed American neoconservatives, such as William Kristol and Susan Rice, who had the ears of Joe Biden and Barack Obama), the president of Mali was overthrown by soldiers, who then gave way to an elected president. The latter was overthrown a few weeks ago by another set of soldiers, who did not shoot him. Actually they let him go (his son too, who had returned to start a political career of his own modeled, maybe, on Chicago’s Kelly-Nash machine).

Neither the Democrats nor the Republicans really want to go into any of this, nor to the unrelated though associated rumblings of civil strife and coup d’états in some of the neighboring countries. Nor would they care to consult with non-neocon experts, such as South Africa’s Ivor Ichikowitz, a successful business entrepreneur who earlier this year distributed the results of a fascinating survey of young-generation Africans. While this study might not pass muster with all members of the American Social Science Association (probably to its credit), it does indicate the deep and broad aspirations on the Continent for political and free-enterprise-driven evolution. It is evidence that Africa is in a post-post-colonial era, inspired, without superficial mimicry, by the American ideals of 1776, which however are viewed as suspect by some Americans.

Mali is now at a juncture due to differences between the junta and the neighbors, grouped in an organization called ECOWAS, Cedao in French. (Economic union of west African states, in free translation.) In an effort to speed up hope and change, this organization, with encouragement from U.S. and Euro officials and NGOs (usually Quangos, actually), object to the overthrow of elected governments. Indeed, there are laws on the books requiring U.S. military and sometimes other aid to be suspended in the event of coups. While allowing for exceptional circumstances, sanctions have kicked in, restricting capital flows as well as arms, which of course is an invitation to the jihadi and highwaymen in the north of the country to once again attack large population centers. That this would necessarily mean the killing of black Africans does not occur to anyone, evidently, except our gallant French allies, who are for the time being maintaining their military presence in the north, where they have hounded the Tuareg in the sands and kept them, a few raids excepted, out of Timbuktu and Kidal.

No, sir, this is not a matter for debate during a presidential campaign. The brave, tough, generous, selfless, resourceful, patriotic men and women of U.S. Army Africa regularly patrol the Sahel, as they do other regions of Africa, on land and in the air, in the forests and the deserts, under torrential downpours and blazing sun, with bullets and medicine and words of comfort for the men and women and children whom they rescue and protect. Like French and other Europeans, they offer training to soldiers whose outlook on their roles is perhaps misunderstood by Western scolds who use human rights and democracy in ways Africans often view as rank hypocrisy.

They serve with quiet and patient nobility. There has been some talk of reducing our “footprint” (with the lightest of boots, it must be said) over there, to the alarm of many (including our gallant French and Chadian friends who have grown perhaps too dependent on us for intelligence and transport, as well as “muscle”), but those are budgetary and strategic matters better kept hidden from the eyes of the electorate, along with the manufacture of sausage.

Mali will pull through. Africa will win, and will join us in the construction of another dramatic chapter in the Story of Man.

*which was enthusiastically urged upon its commanders (ahead and behind) by “intellectuals,” or “experts.” These professional categories have a long tradition of giving advice and no one reproaches them for trading their brains for moolah. However, citizens might be justified in worrying about public officials who rely on these brains rather than their own and those of the people or peoples concerned.