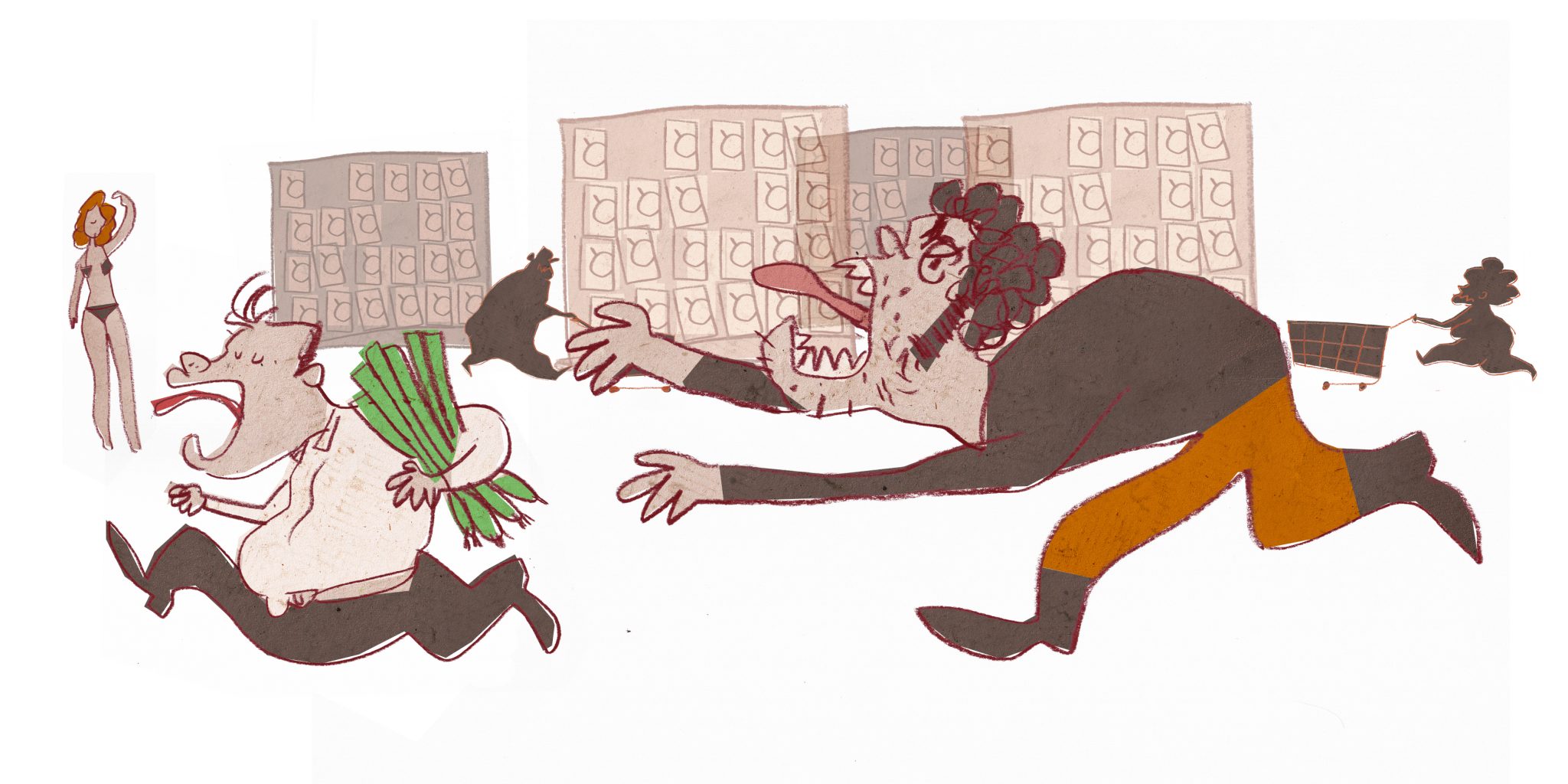 Operation Bikini consists of being able to get into one of them without looking like it’s tattooed on — or, if it features any metallic buckles, being able to wear it without the risk of any of them snapping open and poking a swimmer’s eye out. Putting them back in can be such a hassle. One time I took a guy’s eye out with a leek while standing in line at the supermarket checkout, and after trying to put it back in, there were so many pieces left over. It’s amazing how something as basic, at first glance, as an eye can become so complex when it rolls down the pet food aisle.

At the time I was on the leek diet, which consists of buying a whole load of leeks — incidentally one of the most difficult things to handle in a bus — and poking someone big and strong while in the checkout queue, who will, in a fit of rage, punch your teeth out, and “Bob’s your uncle,” the desire to eat miraculously disappears. I think this can also be done with pineapple, which stings, or with butter, which is slippery, but I haven’t tried it. The leek thing is safer because even if you don’t get your teeth broken, when you get home with all those green leaves, white stalks, and those strange little brown hairs, the last thing you want is to have them around at lunchtime.

Slimming is important because we live in a century in which the only important thing is to feel good about yourself. I don’t know if this stupidity is from Jodorowsky or any of the bargain basement philosophers flooding Facebook, but I’m trying to bring myself up to date, and as I’ve stopped reading Plato and the rest of those old-fashioned philosophers, I’ve realized that everything is simpler than the myth of the cave: all you have to do to feel good is give a like to a self-help poster on Instagram.

The problem with people who want to lose weight is that they are willing to do anything. Take a look outside. All these people are running more or less voluntarily. I mean, they’re not being chased by a dozen terrorists wearing explosive vests. No. They are running just for the sake of running. My more intellectual friends, to give their escapades a more encyclopedic character, like to use Latin terminology. But they sweat just the same, and the next day you see them entering the bar walking on eggshells, and although they call it “severe muscular stress,” that is just good old-fashioned stiffness.

If you really want to lose weight, forget about diets and start cooking. Most people eat too much because they don’t cook. The cooking thing involves getting everything dirty, eating for a little while, and cleaning it all up again only to have to start all over again a few hours later. Cooking and eating are two activities that are incompatible with common sense. Anyone who thinks about it coldly will stop doing one of the two things. There are thousands of restaurants out there, and everything tastes better than at home when you see that others are responsible for scrubbing the oil stains.

Every now and then some expert comes along to tell us that we were doing everything wrong to lose weight and then invents some new diet and makes a fortune in book sales. With most methods, you just end up going horribly hungry, which is something you could achieve without having to eat exclusively peaches, or carrots, or live without protein, or change your breakfast for some slimy green juice, which is the last thing you feel like wolfing down when you get out of bed. You see that frothy little green glass next to your toast, and suddenly you remember that you had promised God to fast one day if you passed that exam in first grade, and mystical as St. John of the Cross, while the soundtrack of Chariots of Fire plays in the background, you clench your fists so as not to be tempted to drink the green juice in front of you — which bubbles, stains, and likely leaves you looking like Shrek’s dumb cousin — and leave it on the counter.

There are people who go crazy when it comes to losing weight. Celebrities end up doing insane things, like eating roots, sticking needles in weird places, or going under the knife without actually being sick.

To go no further, one of my best friends has just now started eating cauliflower, breaking a lifelong blood pact, in a betrayal that I still can’t bring myself to forgive him for. As children in the school dining room, we would pass the cauliflower onto the next kid’s plate. It was a carefully considered decision, a declaration of war that we extended to the whole cabbage family. We promised that our common front against cauliflower would last forever. And we kept it.

But now my friend has married a very thin girl who has convinced him that he is going to die of a heart attack if he does not lose 30 kilos and start eating cauliflower all day long, in order to lower his cholesterol or anything else they tell hypochondriacs to coerce us into being healthy. And the truth is that the change is very noticeable. Not because he has lost weight, but because he is getting a lettuce face, which grants him a promising future as part of the Dora the Explorer cast.

It took a lot for cavemen to discover gastronomy. A great many nameless heroes died trying poisonous mushrooms or revolting animals. And now we know it all, it would be disrespectful to feed on energy bars and herbal teas. Most of the time it’s enough to eat grilled. It doesn’t taste so bad.