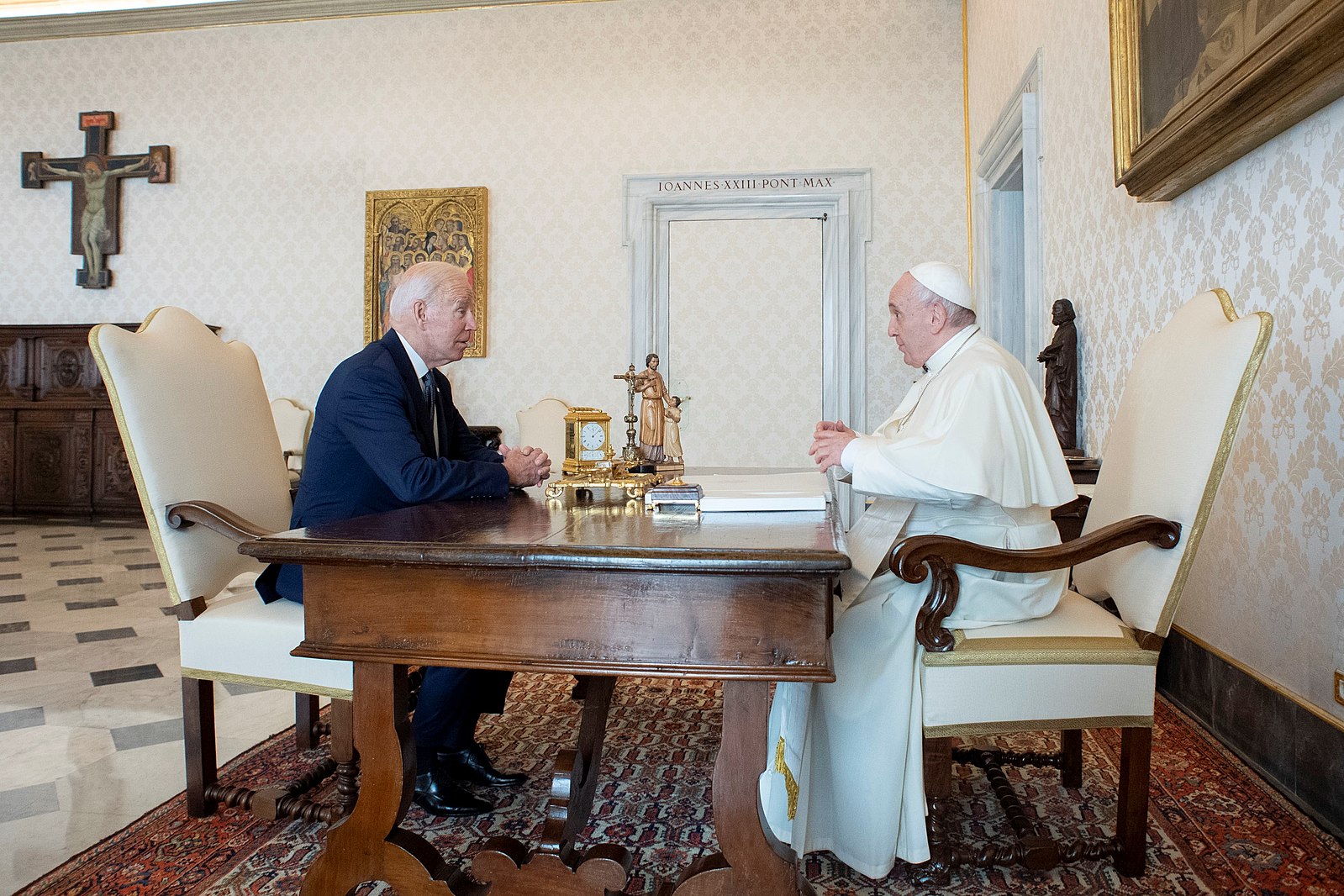 In the days of John F. Kennedy, the Democrats emphasized their political distance from the pope. Kennedy promised Americans that he would never let the pope influence him on “matters of public policy.” How times have changed. Today’s Democrats boast of their political alliance with Pope Francis. They openly confer with him on matters of public policy, as evident in Joe Biden’s latest visit to the Vatican. After he met with the pope last Friday, Biden praised him for “fighting the climate crisis, as well as his advocacy to ensure the pandemic ends for everyone through vaccine sharing and an equitable global economic recovery.”

Judging by press accounts, it appears that Biden and the pope didn’t discuss much beyond their shared left-wing politics. The pope looked famously glum at his meeting with Donald Trump. But the pictures from his meeting with Biden show a very warm exchange between the two. CNN noted the unusual length of Biden’s meeting with the pope: “The world’s most powerful Catholics — President Joe Biden and Pope Francis — renewed their close relationship on Friday, holding a 90-minute meeting that was twice as long as the one the President held with Pope John Paul II in one of his first meetings with a pontiff.”

Biden also met with Cardinal Pietro Parolin, who is the secretary of state at the Vatican. According to the White House readout from that meeting, Biden and Parolin talked about “fighting the climate crisis — both through advocacy and encouraging the climate neutrality of hundreds of Christian organizations worldwide.” They also discussed “efforts to rally global support for vaccinating the developing world against COVID-19.” The White House readout then concludes incongruously that Biden and Parolin “committed to continue using their voices to advocate for personal and religious freedoms world-wide.”

According to the New York Times, Biden “told reporters on Friday that Pope Francis had called him a ‘good Catholic’ and said he should keep receiving communion, an unexpected development that appeared to put a papal finger on the scale in a debate raging in the United States’ Roman Catholic Church over whether the president and other Catholic politicians who support abortion rights should be denied the sacrament.”

The Times continued: “Mr. Biden said the issue of abortion had not come up during their meeting. ‘No, it didn’t,’ he said. ‘It came up — we just talked about the fact he was happy that I was a good Catholic and I should keep receiving communion.’”

“Asked to confirm Mr. Biden’s remarks, Matteo Bruni, the Vatican spokesman, said that the Holy See limited its comments to the news release about subjects discussed during the meeting and added, ‘It’s a private conversation,’” according to the Times.

The Vatican’s statement describing the meeting makes no mention of abortion :

During the course of the cordial discussions, the Parties focused on the joint commitment to the protection and care of the planet, the healthcare situation and the fight against the Covid-19 pandemic, as well as the theme of refugees and assistance to migrants. Reference was also made to the protection of human rights, including freedom of religion and conscience.The talks enabled an exchange of views on some matters regarding the current international situation, also in the context of the imminent G20 summit in Rome, and on the promotion of peace in the world through political negotiation.

So it appears that Biden emerges from this meeting with both his politics and his heretical spin on Catholicism blessed. Biden’s easy manipulation of the Church is a measure of how much has changed in politics and religion since JFK’s day. The question has shifted from the Church’s influence on politics to the influence of politics on the Church — from the first Catholic president who avoided the Vatican’s advice to the second one who happily exploits it.