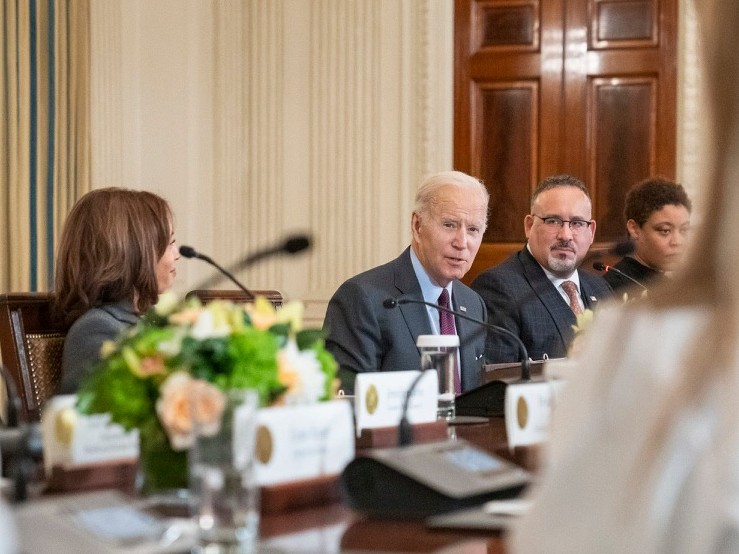 The slogans of the Democrats grow more and more absurd, stating the very opposite of their surface meaning. “Inflation reduction” means inflation increase, “reproductive health care” means nonreproductive contraception and abortion, and the “right to privacy” means the right to force the public to pay for private behavior.

President Joe Biden convened his “Task Force on Reproductive Healthcare Access” earlier this week in order to push such demagoguery. Our second Catholic president is particularly upset that some public colleges, such as the University of Idaho, are no longer “providing contraception” to students. According to Biden, any state that refuses to spend taxpayer dollars on contraceptives and abortifacients for college students is threatening the “right to privacy.”

It speaks to the deadness of Biden’s Catholic conscience that he considers taxpayer financing of the sexual revolution such a sacred cause.

Biden trotted out his education secretary, Miguel Cardona, to claim that students somehow can’t succeed educationally unless the public pays for their promiscuity. “Students need access to health care to thrive in school and in life, and that includes reproductive health care,” the secretary said. Cardona frets that “the Dobbs ruling has sown fear and confusion on our college campuses [and] I worry about the chilling effects this uncertainty, including about access to birth control, will have on students.”

Folks, what century are we in? I mean, how — what are we doing? I respect everyone’s view on this — personal decisions they make, but, my Lord, we’re talking about contraception here. It shouldn’t be that controversial. And — but that’s — this is what it looks like when you start to take away the right of privacy.

What rhetorical misdirection. Forcing taxpayers to pick up the bill for student contraceptives is “controversial” and poses no threat to the “right of privacy.” This is the same “war on women” nonsense we heard during the President Barack Obama years after Georgetown University balked at Sandra Fluke’s demand that it pay for her contraceptives.

It speaks to the deadness of Biden’s Catholic conscience that he considers taxpayer financing of the sexual revolution such a sacred cause. What makes his hectoring even more obnoxious and shameless is the sheer dishonesty of it all: He knows perfectly well that “access” to contraceptives has never been more widespread. Thanks to his Food and Drug Administration, teens can now order them through the mail. The University of Idaho and other colleges have simply stopped handing them out for free. Only Biden would have the gall to cast that as a moral crisis. He intoned gravely at his task force meeting: “And my message to any other college considering enacting policies like this: Don’t. Please don’t. We’re not going to sit by and let Republicans throughout the country enact extreme policies to threaten access to basic healthcare.”

Biden acts as if he occupies the moral high ground on these matters, even as he pushes for the killing of more and more unborn children.

Here we see how Biden’s perverse conception of “reproductive” rights leads to coercing everyone into fulfilling them. By lumping those phony rights together under “access to basic healthcare,” he villainizes the taxpayer unwilling to shoulder their costs. Biden is twisting that moderate position into evidence of “extremism,” even though the extremism falls entirely on his side. Before he sold his soul to Planned Parenthood, Biden used to defend taxpayers who didn’t want to pay for abortions. For many years, Biden supported the Hyde Amendment’s prohibition on the use of public monies for abortion. Now he lectures taxpayers that unless they pay for abortions they stand opposed to “basic healthcare.” (READ MORE from George Neumayr: ‘Discrimination’: Biden’s Euphemism for Religious Freedom)

The flatfooted GOP, of course, never calls Biden on his game of turning yesterday’s moderate position into today’s “extreme” one. Why don’t Republicans go on the offensive on behalf of American taxpayers? At the very least, Republicans could puncture Biden’s posturing. The president acts as if he occupies the moral high ground on these matters, even as he pushes for the killing of more and more unborn children and extols the degradation of American life.

That he turns every official in his administration into an abortion activist, as is evident in Cardona’s abased performance, is disgusting. Vice President Kamala Harris was also at the “reproductive” task force meeting and allowed herself several rhetorical whoppers. Even though her religiosity is nebulous at best, she has apparently been assigned the task of reassuring the religious that killing unborn children is no big deal. A woman seeking abortion, she said, should consult with her doctor, her “loved ones,” and her “faith leader.” But what if the cleric urges her not to do it? Does Harris approve of that? No doubt she would accuse the cleric of denying the woman “access” to an abortion.

Harris added that it is not necessary to “abandon [your] faith or beliefs to agree that the government should not be making these decisions for the women of America.” This is about as convincing as her claim that the American border has been sealed. The truth is that the Biden–Harris administration has utter contempt for the religious and seeks to corrupt and coerce every faith-filled individual. It is bad enough that Biden pushes a godless agenda, but now he even has the audacity to hand its bill to the religious for final payment and declare them “extremists” if they object.