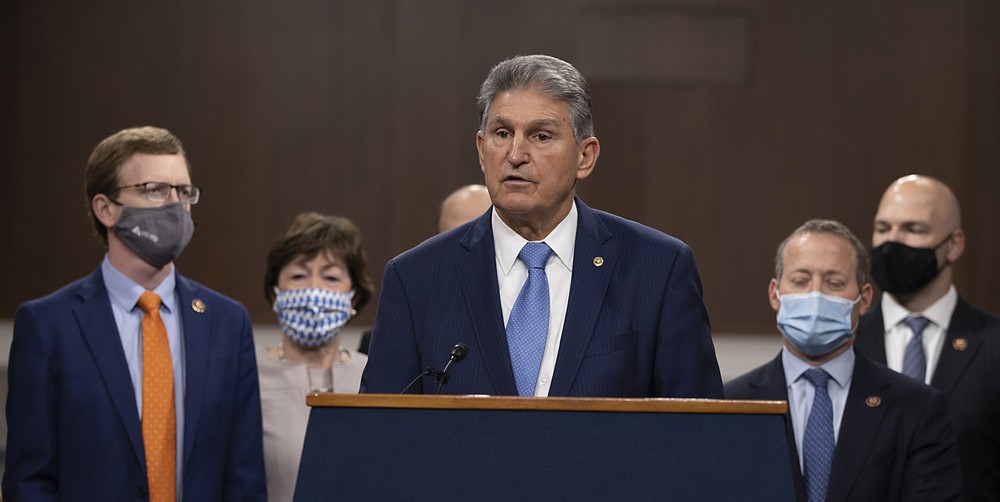 Manchin is perhaps the final incarnation of the Democratic Party old school. He’s a self-described “moderate-conservative” — a blue dog’s blue dog who wheels, deals, horse trades, and log rolls for the people of his state. And his political issue picking-and-choosing probably puts him closer to the median American voter than either Republicans or his fellow Democrats care to admit. With the Upper Chamber split 50-50 between the two parties, Manchin in the Middle has leverage over every bill that hits the Senate floor.

That inconvenient truth puts some serious hurdles in the way of the Democratic Party’s climate agenda. West Virginia, of course, sits at the heart of coal country and atop the Marcellus shale basin. Now chairman of the Senate Energy and Natural Resources Committee, Joe Manchin has no intention of selling out his state.

Just two weeks into the Biden presidency, Manchin has already sent Washington’s more famous Joe a letter cautioning him against the abandonment of America’s energy workers. Manchin argues that we ought not to jettison “responsible energy infrastructure development, including of oil and natural gas pipelines,” and he encourages Biden to “take into account the potential impacts of any further action to safety, jobs, and energy security.”

The tale of two Joes reveals a fundamental change in Democratic Party politics and a rift in our national culture.

Joe Biden, consciously or not, has become the standard-bearer for Democrat neoliberalism, the resurgent political philosophy that aims to fine-tune the market through technocracy. Scranton Joe, he is no longer.

Joe Manchin represents a more traditional flavor of Democratic politics, that of labor and populism. Manchin’s everyman ethos fits more neatly alongside the Trump phenomenon today than any policy platform of Joe Biden’s. Amplifying how out of step the wider Democratic Party is with Manchin’s state, less than 30 percent of West Virginia voters cast their ballots for Biden in November.

Energy politics are emblematic of this cultural realignment. Multinational companies like ExxonMobil have allied with the Biden neoliberals to lobby for a carbon tax. In the meantime, independent energy–producing companies in states like West Virginia, Pennsylvania, Wyoming, and New Mexico have allied with their workers for the right to make their living.

The Democratic Party — Manchin and a few holdouts in the House of Representatives aside — is the party of the new American aristocracy: the laptop class. John Kerry, Joe Biden’s climate spokesman, embodies the worst elements of this new laptop–labor divide. As he told interviewers in 2019, for someone important like him private jet travel is the only choice. But he’s quick to inform workers in the coal, oil, and gas industries who will lose their jobs thanks to Biden’s policies that he has ­better­ ­choices ready for them!

An even more egregious example of the new elite’s detachment from working people is (now-dismissed) Massachusetts Undersecretary for Climate David Ismay. Ismay, who earned degrees at the Naval Academy, Oxford, and the University of California-Berkeley, told a web audience last month that it was time for his state to “turn the screws” on the miscreants who dare to drive passenger vehicles and heat their homes in the winter. “That’s you,” he said, smirking into his webcam, “we have to break your will. Right? I can’t even say that publicly.” It’s a stance he intended to keep private, but it’s one that animates much of the climate movement. People with high-income jobs that allow them to live close to public transit in dense cities feel comfortable with the coming energy price hikes; people who live in rural areas, people who grow things or dig resources from the earth, people who use machinery for work — in other words, people in places like Manchin’s West Virginia — don’t have that luxury.

The Democrats have deluded themselves into thinking the Biden election victory signifies widespread assent to their climate plans. They claim they’ve got the numbers to prove it. One widely cited polling set, performed by Yale’s climate center, tells us that 60 percent of Americans think Congress should do more to address global warming, that 70 percent think corporations should do more to address it, and that 75 percent support regulating carbon dioxide as a pollutant.

At first blush, that suggests the Democrats indeed have a mandate for climate action. But when asked by pollsters, “How much would you personally be willing to pay each year to address global warming?” the median answer is just $20, and 32 percent of Americans say they are willing to pay nothing at all. That’s what Joe Manchin, seemingly alone among Senate Democrats, recognizes. Climate’s a problem, but it’s not a top-of-the-heap issue for working families, especially as we claw back our economy from the throes of pandemic.

The Democrats have gotten high on their own climate change supply. Political reality and Joe Manchin Senate’s swing vote stand ready to pull them back down from their reverie.