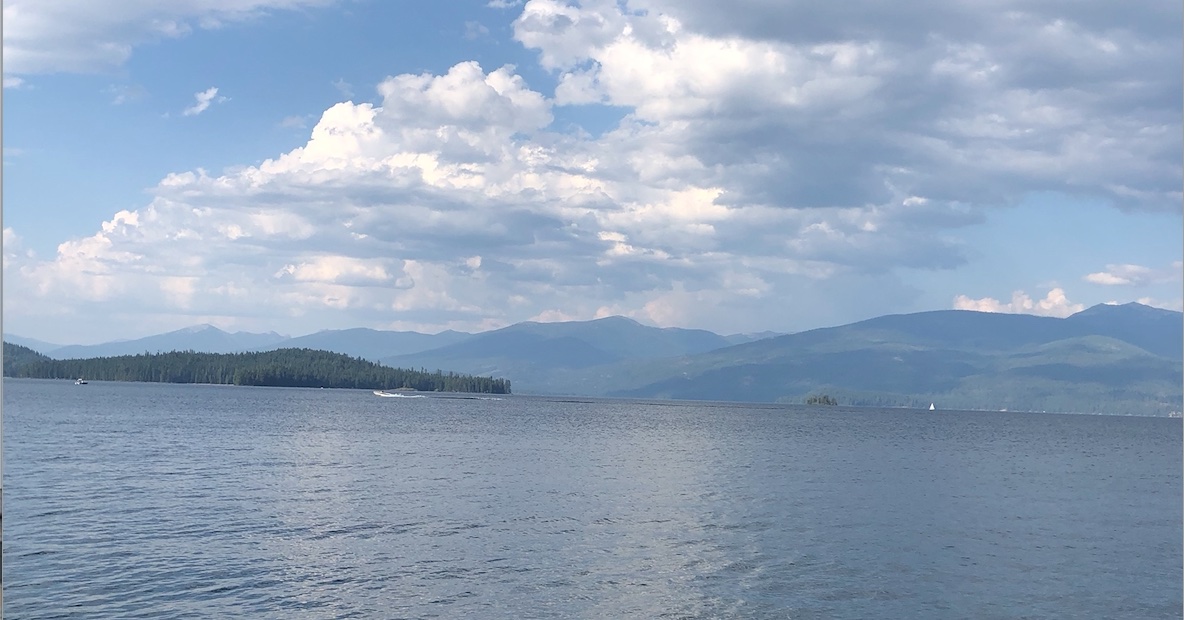 I am back from North Idaho as of 36 hours ago. I already miss it terribly. Just terribly. I spent many happy hours just looking at the lake and listening to the BNSF trains rumble past.

My favorite times, though, were at Hill’s Resort. I’ve talked about it before. It’s a rustic, sunny, airy, woodsy place on Luby Bay of Priest Lake. It has friendly people, stupendous views, and a dazzling array of beautifully polite hostesses, servers, bussers, and chefs. It has a dock and boat piers and forested mountains all around it.

Mostly though, it has the most outgoing, cheery men and women I have ever dined among since dinners of The American Spectator (we need another one soon), and I feel as if I am in heaven when I am there. Really, heaven.

It is far from Sandpoint, maybe two hours with all the stops I make, but it is worth every second of the trip. I have mentioned it before, but please do not go there unless you are in a really good mood.

I have a saying about Hill’s: No anger. No crime. No fear. It is paradise, and please, please, stay away if you are unhappy. 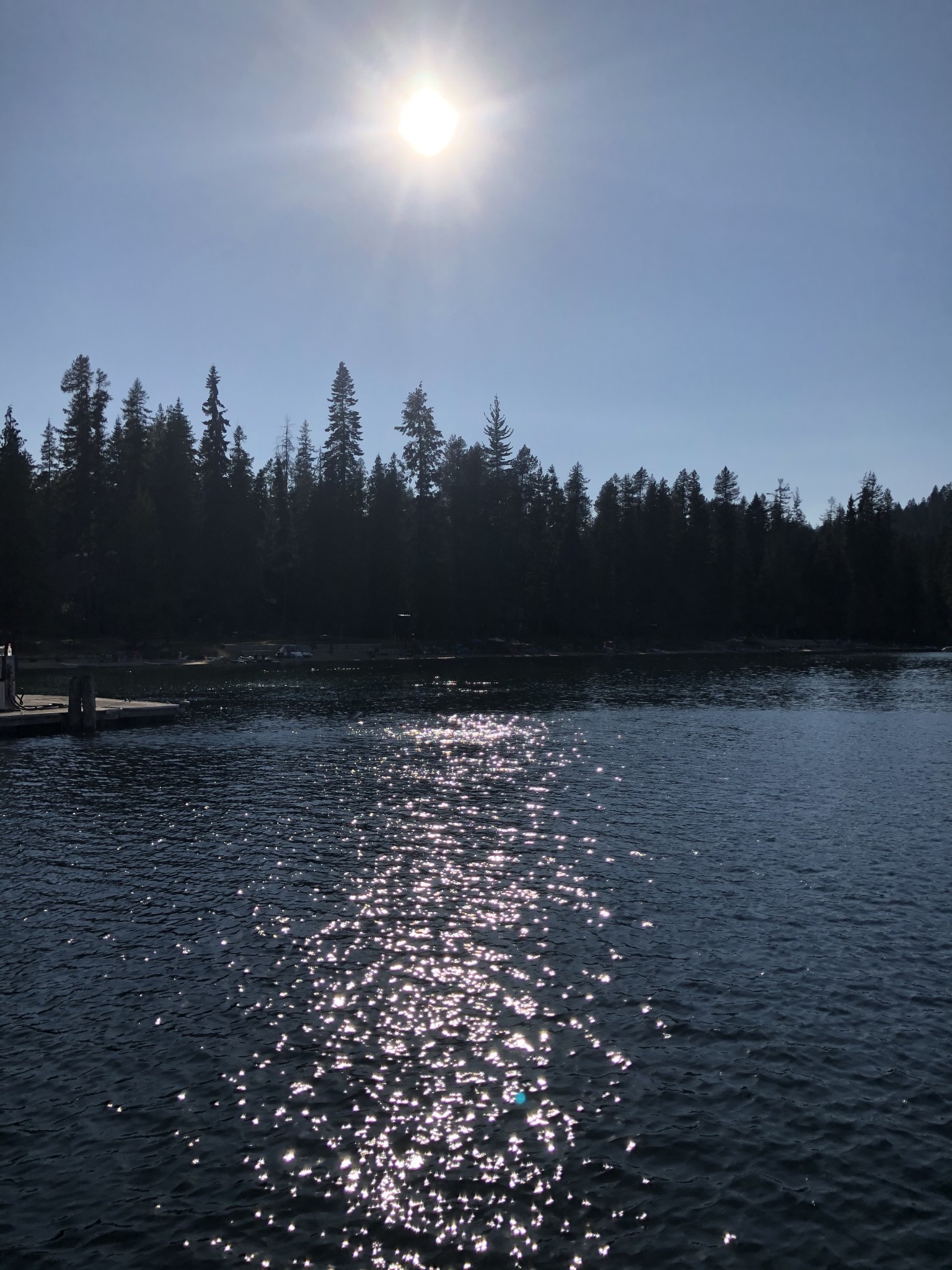 I got back to Los Angeles Thursday evening. My pal Judah picked us up at LAX and did a magnificent job. I have always used CLS, a limo service, for airport pickups, but now I can’t get them to answer the phone and when they do, they mess up and don’t show up. So Judah was great.

When I got home, there was my wife at the top of the stairs smiling and literally shaking with happiness that I was home. I mean genuinely shaking. Her nurse, the irreplaceable Gemma, was by her side steadying her.

I hugged her until she stopped shaking and then we lay down and held hands for hours until it was dinnertime. I got up and made her French toast. I make it only with Pepperidge Farm white bread, Pam, butter, vanillin, cinnamon, and Aunt Jemima maple syrup. (Alex takes it without the syrup.) No one here that I know of sells Pepperidge Farm bread, so I ask my pal, Bob Noah, to buy it in D.C. and send it to us here. It’s insanely good bread and makes the best French toast ever. Thank you, Bob.

Now it’s Saturday afternoon. I have just been lying in bed staring at Alex’s profile. She’s sleeping a lot. Her chronic fatigue is back with a vengeance. Luckily, she has nurses she loves, and she has me to stare at her.

She’s the absolutely most beautiful woman on the planet, the No. 1, so it’s pure pleasure to look at her. She has been in my life since she was 19. We were married the day after her 21st birthday. She was wearing a dress that cost $99. Her father, a colonel in the U.S. Army, Silver Star, Bronze Star, Distinguished Service Medal, so many others you cannot count them, was at her side in dress whites, crying. He cried a lot, especially when he recalled the men he had fought with in Europe and in Vietnam who did not return home alive. You cannot conjure up in your wildest imaginings a handsomer or better man!

Alex is not human. She is a saint. She is everything a Christian and an American should be. Modest. Loving. Forgiving. In my mind, she is God’s love in the flesh.

A few days ago, she was in a light sleep. I played the great Bob Dylan version of “Dixie” right in front of her face, and she sang along in her sleep. She is my goddess. My Dixie Goddess.

It’s hot here this morning. I’ll swim in a short while. I just got through reading a reprint of an article I wrote about Richard Nixon and Mrs. Nixon and Julie and David at a birthday party for Julie in 1976. I was there. It was a breathtaking insight into the greatest president of the century. If I can, I’ll reprint it.

Meanwhile, I was out at our house in Malibu yesterday. A guest, a tall, staggeringly beautiful 31-year-old single mother, came over to have some company as she was fighting with her mother. That’s old news.

On the way back to Beverly Hills, my nurse, Jeff, a breathtakingly smart Filipino, casually mentioned that it was his birthday. I had not known. I congratulated him heartily. He’s only 37, and I asked him whether he was going to register as a Republican or a Democrat.

He laughed, nodded in my direction, and said, “A Republican, of course. Like you.”

“It’s really very simple,” he said. “I want to work. I want to do my best for other people. Pay my taxes. Accept my responsibilities as a citizen. Not loaf and just squeeze whatever I can out of the government. To me, that’s a Republican.”

When we got home, we made Skuna Bay salmon, the best fish on this Earth. I sauté it in a mixture of butter and olive oil. Then we watched Jesus Christ Superstar on TV. I fell asleep after I had watched it twice. By then, Jeff had left. My nighttime nurse, Ceazar (for my injured knee cap), was avidly watching Jesus.

“What do you think the main commandment of Christianity is?” I asked him.

“Love one another,” he said firmly.

When I woke up, I was holding my wife’s hand and saying, “No, no, no, it can’t be possible that God let me be an American and gave me the best woman on this Earth as my one and only wife. It can’t be possible.”

My wife was laughing.

Now I am going swimming. This cannot last, but I will enjoy it while I can. And I will thank God.