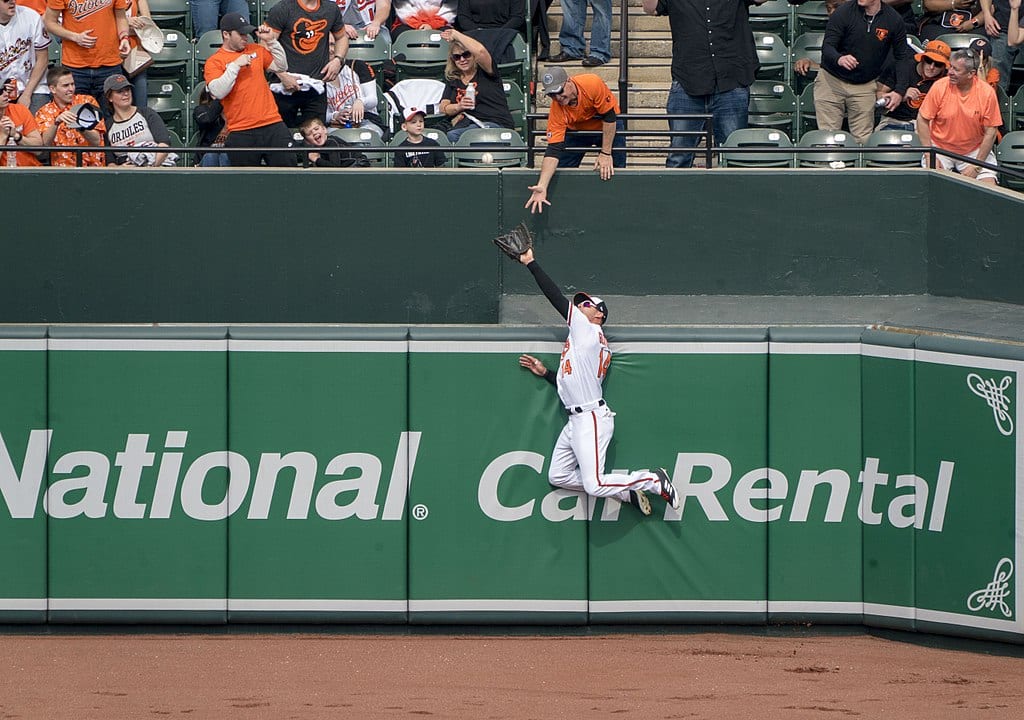 On the first day of April 2018, a spoof flashed around social media. In honor of Easter, all thirty Major League Baseball teams would be wearing jerseys in Easter egg pastel colors. April Fool! The day dawned, and all thirty teams wore their normal uniforms. The culprit, Chris Creamer of SportsLogos.net, said it was all in fun. 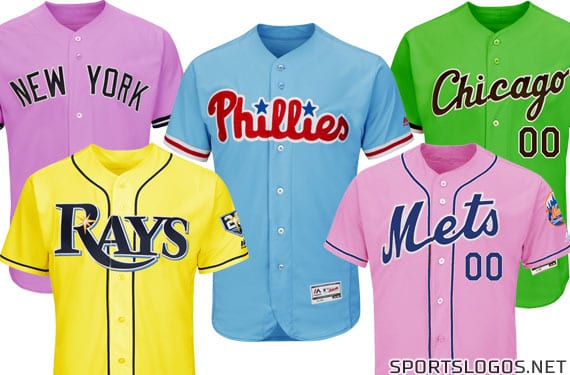 Creamer’s joke gained credence thanks to MLB’s habit of commemorating everything from pet dogs to “our troops.” (“Pups in the Park,” who has to clean up that mess? And forgive my cynicism, but when I wore the uniform we were frequently referred to as baby killers.)

Of course the thing honored must be Politically Correct. For years now, players have gone to bat wielding pink bats and pink batting gloves on Mother’s Day. When someone told me Easter uniforms must be a spoof since it’s not PC to celebrate a religious holiday, someone else responded that Passover was the same weekend as Easter this year. So it could easily be accommodated by having the players also wear yarmulkahs. But, let’s not get into comparative religions. 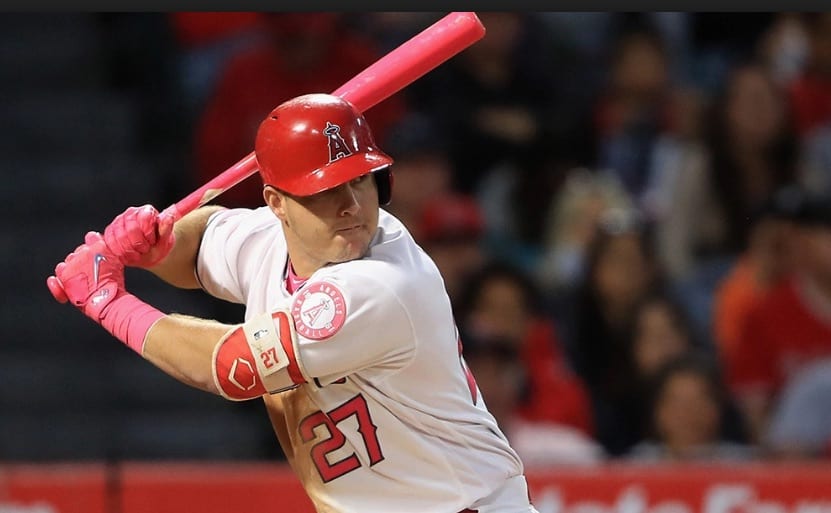 Mike Trout of the L.A. Angels, Mother’s Day 2017. I’m sure we all love our Moms, but would they really want their grown sons wielding pink bats? (MLB)

Baseball is an elegant game, the only team sport not played against a clock. It is full of traditions. But it’s changed. Take the broadcasters: please. When I was a kid they called pitches, balls, strikes and plays, and made prescient observations about players — nothing else. The last great practitioner, Vin Scully, retired in 2017. There were no reminiscences of their playing days, no ballgirl interviews with players, no celebrities cluttering up the broadcast booth while the game was going on, no goofy mascots, no songfests, no fireworks, no instant-replay, no reviews (the umpires were on an equally high level and utterly impartial). Just baseball — pure and elegant, as God and Abner Doubleday intended. (Yes, I know, Abner probably didn’t invent it, but he should have.) 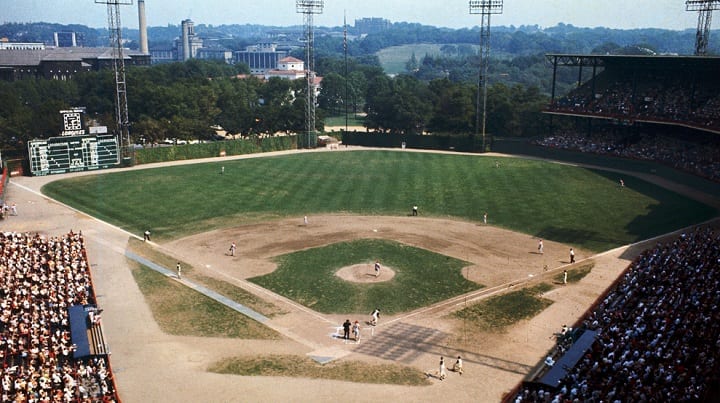 Forbes Field, Pittsburgh Pirates.  One of the improvements since the 1960 World Series: field grooming.

Just for fun I thought it would be amusing to record the vanished features of baseball as it was in, oh, say, the Summer of 1960. (One of my bittersweet years: the last before my original Washington Senators lit out for Minneapolis.) I divide these between The Good (things we should have back) and The Bad (things that probably won’t be missed). The more of these you remember, the closer I can pinpoint your age.

1. Remember scheduled double-headers most Sundays, one ticket for both? (I realize that the cost of salaries and everything else now precludes two-games-for-the-price of one. So how about a ticket to the same seat for two Sunday games, an hour or so apart, with a slight discount over the standard two-game price?) Among the improvements would be a shorter season. Today’s expanded playoffs have us playing in freezing March and darkest November, which God never intended for the game of baseball.

2. The home team “took the field” and stood for the National Anthem, which was part of every broadcast. The National Anthem is still played. (Disrespecting it hasn’t spread here from football.) But you never hear it before a broadcast. And you should. Some of us still remember that.

3. There was no such thing as a “designated hitter.” The American League adopted this ill-considered rule in which the pitcher never hits. He is replaced in the batting order by an exhausted rooster who can still bang the ball but not play the field. The object was to produce more hitting in an era of dominant pitching. The catastrophic results included the demise of strategy (like the key decision of when to pinch hit for your pitcher), and the decline of the sacrifice bunt, which every pitcher was once expected to remember and execute. Conversely, many players simply don’t know how to hit away to the opposite field. This results in the ridiculous “shifts” we see so often. Another thing God never intended was all the infielders playing on one side of the mound.

4. Bunting is still done, mostly in the National League, but it’s a vanishing art. The essence of the classic bunt is surprise. Time was when you’d never square around before the pitch, holding the bat in your hands. This just allows the corner basemen to come charging in to cut off your sacrifice. Watching today’s unskilled labor stand there holding their bats long before the pitch makes my hair hurt.

5. Pitching mound courtesy: When relieved, the departing pitcher would wait for his reliever, hand him the ball, and pat him on the back before he left — a little gesture of encouragement that has seemingly vanished. Today, be a pitcher’s performance great or awful, he slinks off the mound a few seconds after the manager arrives to take him out.

6. Everyone remembered that a no-hitter was NOT mentioned until it was complete. Today, with the exception of a few traditionalists, they start blabbing “X has a no hitter going” as early as the fifth inning. The words even pop up on computerized box scores. Please note: this doesn’t go on in the dugout. Teammates give the no-hit pitcher a wide berth, and nobody, but nobody, says the fatal words to him. Of course no one believes that saying “no-hitter” before the last pitch is a jinx. It’s just a little nicety. Voicing those words is the act of an ingrate.

7. There were no names on uniforms. (The Yankees, Giants, and Red Sox maintain this tradition, at least on home uniforms.) Pasting names on uniforms might have been useful before the digital age. But now the TV, smartphone and computer monitors identify every player constantly, as do the digital play-by-play programs. If you’re at the yard, the guy’s name and mug-shot are plastered on a big scoreboard. If all else fails, break down and buy a program!

8. Ballpark PA systems didn’t add to the cacophony with recorded cheerleading. There was no “Everybody Clap Your Hands.” It was enough once to have an organ blasting feel-good muzak. Or there were certain features identified with individual teams, like Brooklyn’s famously out-of-key “Dodger Sym-PHONY.” 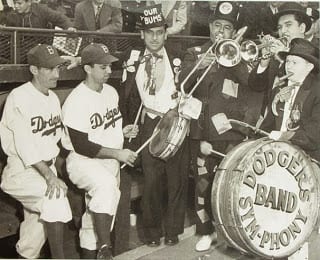 The Brooklyn Dodger Sym-PHONY was a hallmark of Ebbets Field.

By the way: individual “walk-up music” for each player is one of the dumbest modern accretions I’ve seen, especially when the guy proceeds to strike out on three straight pitches. If a player deserves music, let it come after a good at-bat, fielding play, or pitching performance.

1. “Pitch counts” were unheard of. The manager would decide how an individual pitcher was doing based on his current performance. Different pitchers had varying endurance. Pitchers tended to be left in much longer than they are today. While all this was a tribute to individuality, medical knowledge has advanced. The known strains of modern pitching, with 100 mph fastballs and high-speed breaking balls, has made pitch count a statistic worth considering.

3. Batters didn’t wear gloves. A baseball writer I know says: “I remain puzzled by how Cobb, Speaker, Jackson, Hornsby, Ruth, Gehrig, Goslin, DiMaggio, Williams, Musial, Robinson, Mantle, Mays, et al. could hit the way they did without batting gloves. Must have been a profound handicap.” I think he’s being facetious. Golfers and cyclists have always worn gloves, they must do some good for baseball players too. (But I would forcefully ban stepping out of the box to re-wrap your Velcro glove fasteners between pitches, shortening the average game by a good ten minutes.)

4. On the first Yankee broadcasts I remember, Mel Allen would sometimes say, “Well folks, the Yanks are bringing in their gloves.” That was when outfielders often left their gloves on the grass of the outfield, sometimes even in fair territory. So when the home team was determined to win a tie game in the bottom of the 9th, they would “bring in their gloves” as a kind of declaration. This quaint practice ended in early Fifties, when a couple of players tripped over opposition gloves left out in the field.

“Progress was all right once, but it’s gone on too long”

… said Ogden Nash. Baseball is an American institution (with avid fans in places like Japan and the Caribbean), in part because of its gentlemanly traditions. There are many more than I’ve listed here. (Watching Game 7 of the 1960 Pirates-Yankees World Series, I noticed that pitchers worked fast, batters didn’t step out between pitches, and that exciting matchup lasted only two hours 36 minutes. Everybody wore stirrup socks, and Casey Stengel‘s ears were the size of Texas. 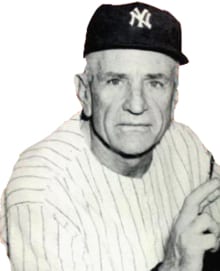 We can never duplicate Casey’s ears, but we could profitably have more stirrup socks and knickerbocker pants, instead of those baggy-legged trousers that flop around at shoe level on the less sartorial players. Damn right I’m a grumpy old man.