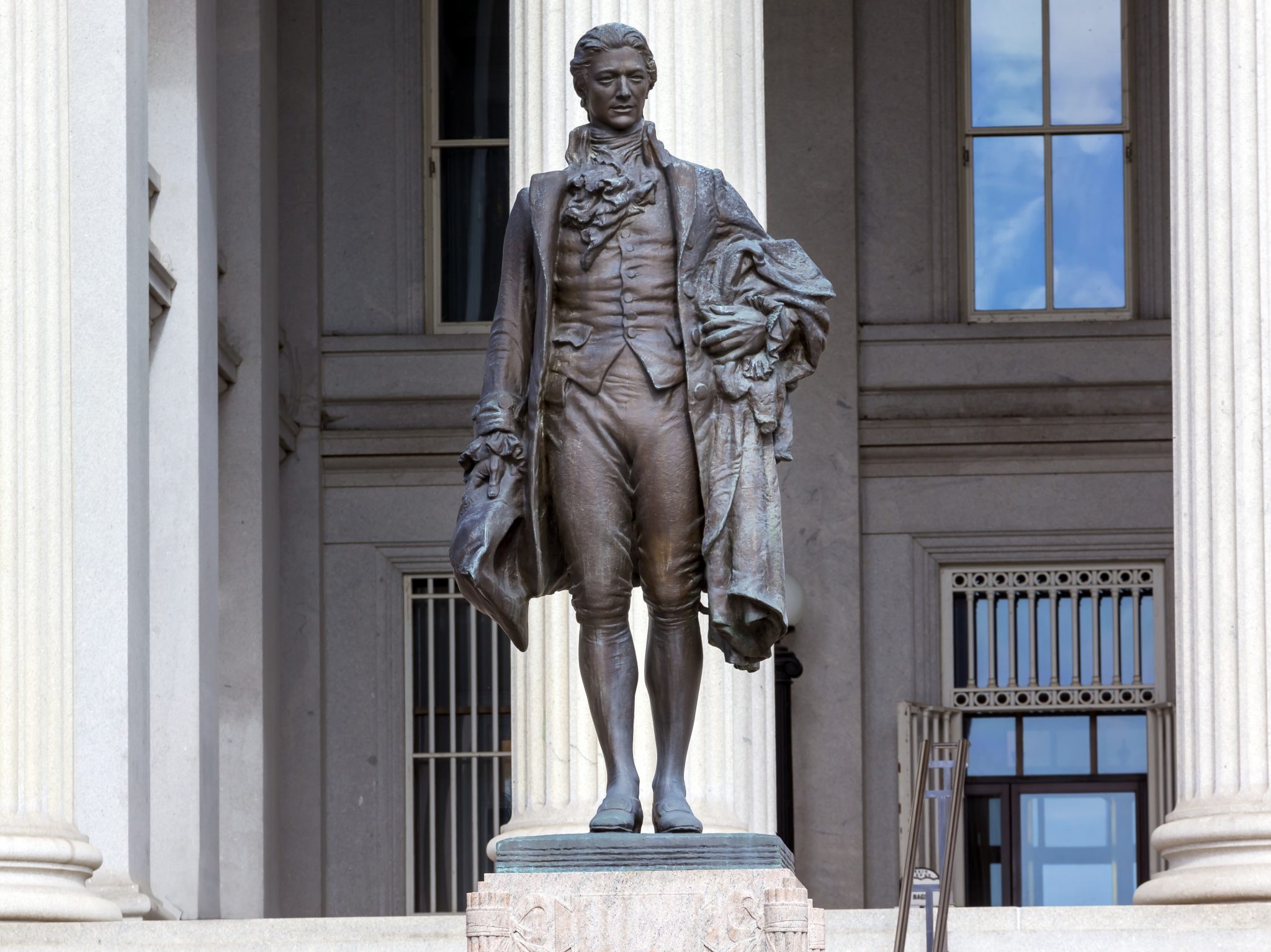 In The Federalist, Alexander Hamilton devotes many consecutive articles to addressing the faults of the Articles of Confederation. Occasionally writing together with Madison, he makes the case that the new Constitution would remedy those defects.

That the government established by the Articles had failed Hamilton takes as self-evident. The loose confederation under the Articles lacked enforcement powers. All it could do was suggest to the states that they comply with their legislation. The new Constitution would remedy this with an independent federal government that could enforce its legislation through a federal executive and a federal judicial system.

What would this strong union be able to accomplish? Hamilton writes,

The principal purposes to be answered by union are these — the common defense of the members; the preservation of the public peace as well against internal convulsions as external attacks; the regulation of commerce with other nations and between the States; the superintendence of our intercourse, political and commercial, with foreign countries.

With the incoherent government under the Articles, the United States was threatened with failure in all these areas, each of which is basic to a nation’s success.

So we might sum this up by saying that the difference for Hamilton between the failed confederation and the proposed constitutional federation is that the latter would have more power concentrated in the central national government.

But Hamilton makes a striking point that puts this all into a different perspective. There is a great structural problem with the Confederation that weakens it fundamentally and makes it unable to rescue itself from its own problems — its power rests on the legislatures of the states. The new Constitution, on the other hand, is to be ratified by the people, in convention, directly, not through the established state power structures. He writes,

[There is a] necessity of laying the foundations of our national government deeper than in the mere sanction of delegated authority. The fabric of American empire ought to rest on the solid basis of THE CONSENT OF THE PEOPLE. The streams of national power ought to flow immediately from that pure, original fountain of all legitimate authority.

And here a conservative would applaud.

Was Hamilton being merely inconsistent? Did he really feel that way about the people, and this was just a piece of insincere political propaganda? Or was it his embrace of a strong central national government that was not genuine?

The best answer is that neither of the above is true.

As a realist and a constitutionalist, Hamilton appreciated that if the people were incapable of acting as a coordinated whole through a competent national government, they would be easy prey to foreign intrigues and even incapable of responding to internal disturbances. These are basic concerns of the people, which they find more important than theoretical arguments among different governmental bodies about who should have the most power. The people say, if we can’t defeat a foreign invader or respond to an internal emergency, all our arguments will be meaningless abstractions.

Rereading our sources can make our criticisms of excessive concentration of power more focused and therefore more meaningful. The use of concentrated power to address grave national issues is something the Constitution was designed to facilitate. We need to raise the alarm when the emergencies are not real, only set-pieces designed to deceive the people into consenting to a permanent transfer of power away from them.

The genius of our Constitution is that it makes it possible to focus the power necessary to defeat tyrants while still guaranteeing liberty.

Tyrants, as William Pitt the Younger said, love to use emergencies as an excuse for grabbing power. Think of the Reichstag fire that Hitler used as an excuse for the passage of emergency powers, turning Germany from a democracy into a dictatorship that did not end until millions of lives had been taken and untold treasure had been spent.

Hitler and Stalin and others of their ilk were and are contemptuous of democracies. Their brutal minds do not understand the strength of freedom, and they mistake the sometimes-chaotic debates and fractiousness of free societies as weakness. They think in straight lines, with no deviations tolerated. Since nature is mostly curves, they use force constantly to keep things straight.

The genius of our Constitution is that it makes it possible to focus the power necessary to defeat tyrants while still guaranteeing liberty. To accomplish that feat, it trusts in that within each person’s sacred freedom there is an ability to discern between real danger and the fake emergency of the would-be tyrant. The sovereignty of the nation rests in each individual, and by each individual’s sacred acts of discernment does our nation survive, thrive, and prosper. We can come together with that fullest measure of devotion unknown to those whose allegiance is merely compelled.

The great constitutional conservatives in our political tradition have looked not to the single straight-line ideas that organize ideology-driven dictatorships. Their trust is in those institutions that develop a lasting and deep discernment in each individual. Only if we water that root do we get to enjoy the fruit of a true government of, by, and for the people. Only in a political tradition that honors the idea of a transcendent truth, beyond the control of politicians, can there be the humble employment of such very real powers as those with which the First Being blesses us. Only when such powers are coordinate intimately within each person is it possible to build up an outer structure of society that is resilient enough to face down the greatest of threats.

As Congress and the Executive move to put massive measures into place, we the people must look at each measure discerningly, accepting only those imperatives that address the emergency and rejecting those that would use it as an excuse for a permanent concentration of power away from our hands. Thus ever have we thrived.