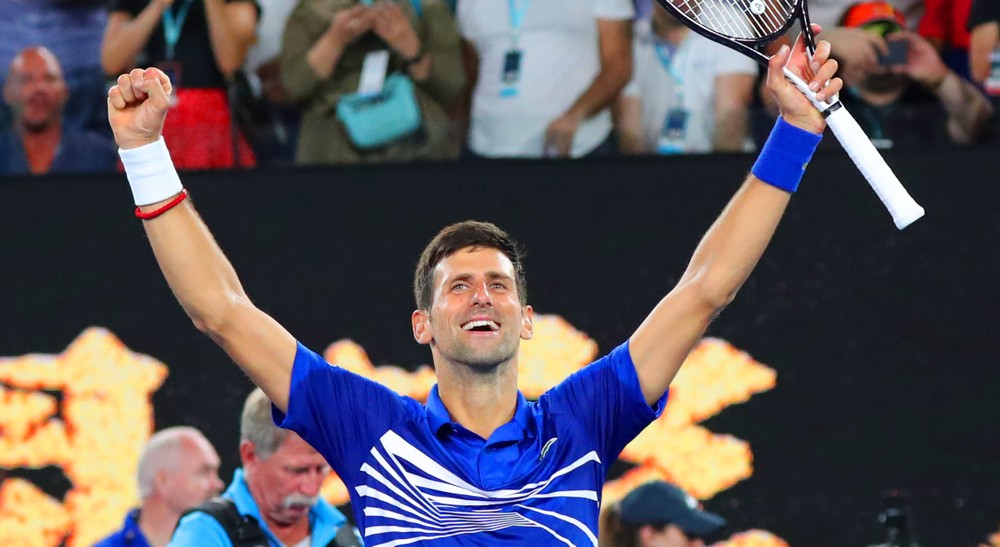 With Naomi Osaka’s quick dispatch of Jenny Brady in the women’s final of the Australian Open tennis tournament for her fourth major, the top of the men’s draw was hugely anticipated. As competitive nail-biter it flopped, but it showed Novak Djokovic at the top of his form overwhelming Daniil Medvedev in the men’s final.

The mighty Belgradian never gave the Muscovite a chance. Mr. Pleszczynski, who knows a great deal about history, might say it was a stunner, because normally the Russians play big brother — which is better than Big Brother — to the Serbs, and this time it was Borodino in reverse.

But he would not make that comparison, because this is not war but sports, and anyway the metaphor fails because Borodino was a bloodbath and this match was surgical. Borodino, which had nothing to do with Serbia, was worse than Antietam or Gettysburg. But Russia lived. Despite the horror, Leo Tolstoy viewed Mikhail Kutuzov, the Russian commander, as a genius and a hero.

You have to be circumspect here because ostensibly Napoleon invaded Russia to free Poland from the Tsarist boot in an early case of making war for democracy. But the glory turned to ashes and the hero lost his luster; it was downhill thence, per Mark Knopfler, Done with Bonaparte.

Thanks for sports, eh? And a good reason to keep military metaphors out of sports reporting. It might help to restore a bit of patriotism in sports, but that is an entirely different matter. Sports once were a time to bring crowds to their feet singing anthems, waving flags, cheering for national teams. The Davis Cup long ago was a far more important event in tennis than any major (the name for the tournaments on the Slam circuit). Now it is all but irrelevant.

Mr. Pleszczynski, whose tennis sharps are acute, is partial to recognizing sports figures on their individual merits, but he likes to see a certain correspondence with large historical or geopolitical trends. The plot point here was that Daniil Medvedev, having been successful lately against the 10 years older, more experienced Djokovic, belongs to the cohort of very young players who are expected to take over the headlines from the lions now in their 30s (whoops, zoological metaphors). But one of these young men must win a major. And this one is the best Russian in his class. Can the Russians forever be outplayed by their kid brothers?

The defending champ suffered an abdominal tear, as he himself described it, in one of the early rounds. That diagnosis was not mentioned subsequently, prompting some talk about Djolovic’s predilection for head games. Psywar (whoops) or not, he stopped Alexander Zverev at the quarters in four sets, and then at the semis he beat the surprise of the tournament, the Russian qualifier Aslan Karatsev, in three. He looked hale.

He is doing well against Russians, said I to Mr. P. He allowed as how that might be so, but Zverev, whose parents are Russian, lived all his life in Germany, and Karatsev, notwithstanding an outstanding Cinderella run, is from Vladikavkaz and Russian champions normatively are not rubes. This could be the exception, I opined. Anyway, it is moot, he replied, because Medvedev beat the dashing Stefanos Tsitsipas, who looks like d’Artagnan and whose mother is Russian, in a gorgeous five-set duel after dropping the first two sets. He made the shot of the fortnight, a running backhand from the corner that went right down the line as Tsitsipas watched.

Yet moot became mush soon enough. Medvedev, who lost a fantastic five-setter to Rafael Nadal at the U.S. Open in 2019 and was seen as being on the cusp of his first major, is known to have one of the most tactically intelligent games on the tour, wherein he can do just about anything, meaning his opponent never knows what he is going to do. But Djokovic dictated from beginning to end. He kept points short most of the time, controlled the net, and tricked Medvedev into making mistakes in the longer rallies. Match point was an overhead backhanded volley, a beauty.

At under two hours, Djokovic’s own record-breaking ninth triumph at the Australian Open may be the shortest final ever in a men’s major. And apart from last September’s U.S. Open, won by Dominic Thiem, older than the “next-gen” but younger than the “big three,” the hierarchy still holds: Roger Federer won here in 2018, and since then all the majors have been either Djokovic or Nadal. (Overall, the Swiss and the Spaniard hold 20 each, the Serb 18. And who counts their nations’ Davis Cups?)

Yet, in the matter of personal tournaments and national ones, Novak Djokovic, who is nothing if not thoughtful, said something revealing, and touching, and quite admirable, after it was over. He said that, as long as his older inspirations, Roger and Rafa, go, he goes: “In a way, it’s like a race who plays tennis more, I guess, and who wins more. It’s a competition between us in all areas. But I think that’s the very reason why we are who we are, because we do drive each other, we motivate each other, we push each other to the limit.”

American colors had the consolation of Rajeev Ram, the man of Carmel (Indiana, not California) winning in mixed doubles with Brno’s own Barbora Krejčíková, overpowering local favorites Samantha Stosur and Mathew Ebden in two sets. They won here in 2019, and she won with another sporting fellow last year when Ram had to call in sick.

Since the retirement of Mike and Bob Bryan, Rajeev Ram, with his graceful serve and volley game, is the best doubles player in America. The only player arguably as good is Jack Sock, whose commitment to full-time doubles work remains uncertain. It has to be said that Ram might have shown a little more of the old chivalresque when he smashed a ball from the net that nearly hit Miss Stosur scarcely four feet away, but winning is all, and there is the money. (To be fair, watching this stuff on the screen just does not compare to the real thing, and the ball may have grazed her, with no damage and no complaints of course; she is an Aussie.)

Ram won here in men’s doubles last year with Joe Salisbury — from London, like that other great tennis man, Bo Johnson, who has not been on the courts much of late — but this time the pair lost in the finals to veterans Ivan Dodig and Filip Polášek, who are from Croatia and Slovakia. Aryna Sabalenka, who is from Minsk, is one half of the winning team in women’s doubles.

I pointed out to Mr. Pleszczynski that all these Slavs are south Slavs, except for Miss Sabalenka. “Minsk, mind you,” I said. “Not Pinsk, Minsk.”

“That does not refute Bismark’s belief they are not worth the life of a single Pomeranian grenadier.”

Rather than get into a game of non sequiturs, I changed the topic. “Who’s more great, Cy Young or Christy Mathewson?” But he had enough. “Ask Mr. Thornberry,” he said.