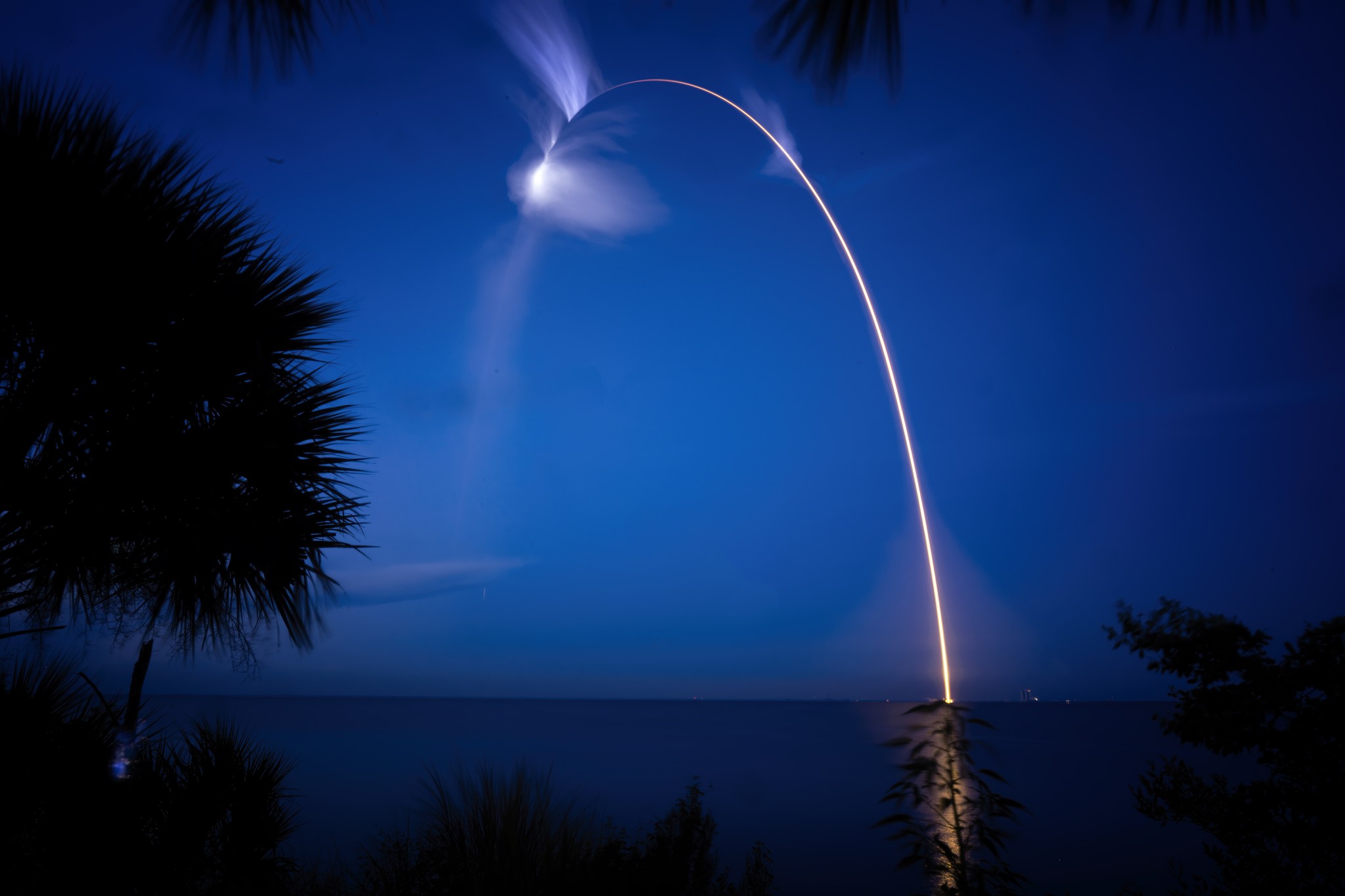 Spectacular as every SpaceX rocket launch is, they’ve all become pretty much routine. SpaceX makes the deal and gets a launch window. The launch window approaches and the payload is mounted. Thirty minutes before launch, the rocket is loaded with rocket-grade kerosene and liquid oxygen. Seven minutes before launch sees the engine chill and six minutes later the command flight computer initiates final prelaunch checks and configures propellant tanks for flight pressures. Mission control counts down the final 10 seconds and … liftoff.

Within two and a half minutes, the first and second stages separate. The Falcon-9 booster successfully returns to Earth and lands on the assigned SpaceX drone ship recovery platform to be cleaned up for a future launch. The second stage engine starts, the fairings covering the payload open and fall back to Earth to be recovered and reused. The second stage maneuvers to the target altitude under the power of a single Merlin Vacuum engine and deploys its payload.

And that’s just how things worked with Thursday’s launch. It was less than an hour and a half from fueling to launch to achieving payload release for ballistic lunar trajectory. Mission accomplished. The key components of the Falcon-9 booster (first stage and fairings) have been recovered and are being refurbished for reuse. And that reusability is key to the SpaceX business model. The Danuri launch marks SpaceX’s 34th mission this year, achieving an average of one launch per week. SpaceX plans six more launches this month alone, all using recycled components, as Elon Musk continues to populate his Starlink satellite constellations, support national space agencies, and sell launch capabilities to other commercial customers.

But Falcon-9 rockets are just the first leg of the journey. Their Starlink satellites, like many sole client and ride-share customer payloads, function as self-contained spacecraft, capable of changing orbits to accommodate evolving missions. They can also move out of the way to avoid newly launched payloads attempting to penetrate the ever-denser constellations of low-Earth orbit satellites, observer platforms, and technology test platforms. Reusable Falcon rockets punch the equally reusable Dragon Crew and Dragon Cargo capsules to and from the International Space Station, missions that keep on contributing to space exploration goals, often long after the delivery vehicle has been refurbished, refueled, and relaunched on other missions.

Ditto with the Danuri lunar orbiter. B152-6 dropped Danuri into a Weak Stability Boundary/Ballistic Lunar Transfer profile, designed to achieve lunar orbit by mid-December. Denuri’s yearlong expected lifespan orbiting the Moon is all about supporting future manned lunar missions. Its five Korea Aerospace Research Institute-developed instrument suites will capture high-resolution images of probable landing sites, acquire polarimetric images to investigate detailed regolith characteristics, measure the magnetic strength of the lunar environment, map the spatial distribution of rare elements and minerals, and advance disruption tolerant communication network technologies. A sixth instrument package developed by NASA supports a ShadowCam designed to capture high-resolution images of permanently shadowed regions, as well as the interior of craters. By the time Danuri arrives on target, the Falcon-9 components that got it there will already be repurposed for subsequent deliveries.

The very frequency, reliability, and affordability of SpaceX’s ubiquitous Falcon-9 rockets erodes news coverage and shortens attention spans. It’s the cargo that gets all the glory. Astronauts, cosmonauts, and space tourists shuttling back and forth to the International Space Station in their reusable SpaceX Crew Dragon capsules atop reusable Falcon-9 rockets still net headlines, as do routine resupply missions in Cargo Dragon capsules (so reusable that they can be retrofitted as Crew capsules). Special missions like the Danuri lunar orbiter can still fire the imagination. Occasionally, shared-ride ventures carrying dozens and dozens of satellites, technology testbeds, and observation platforms make it above the fold.

But SpaceX’s Starship and its super heavy rocket are waiting in the wings — a fully reusable transportation system designed to carry both crew and cargo in excess of 100 tons to Earth orbit, the Moon, Mars, and beyond. Starship has been selected to ferry astronauts from a yet-to-be-built and yet-to-be-funded Gateway space station from lunar orbit to the lunar surface and back. A set of three to four starship variants could conceivably be linked together to serve as a replacement for the aging International Space Station.

Scheduled for its first orbital test flight before the end of this year, I suspect that every single Starship launch will hold our collective interest for the next several decades.