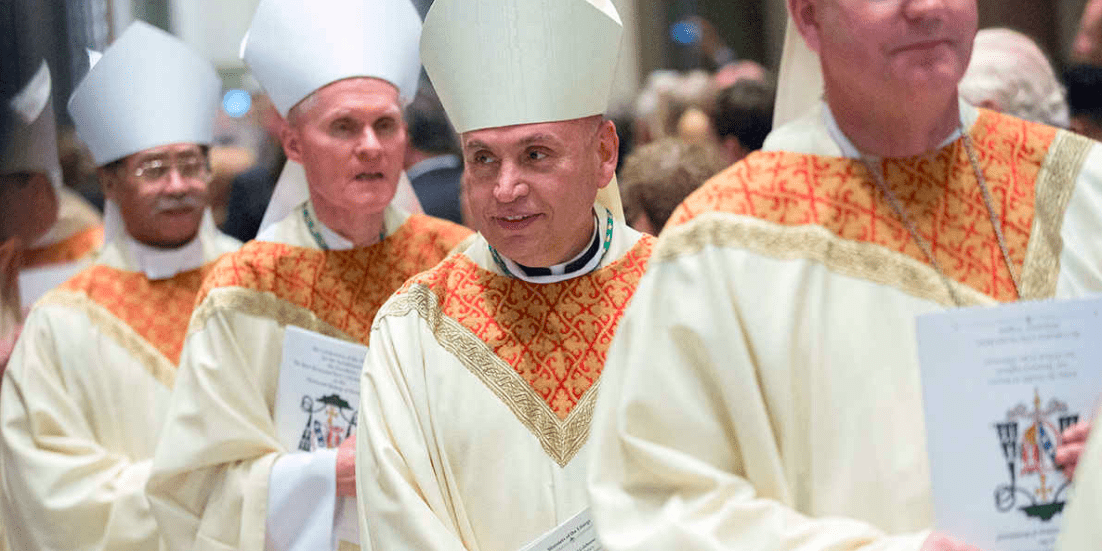 Shortly after his elevation to archbishop of Washington, D.C., Wilton Gregory made a great show of promising to listen to a “wounded” laity. It was total BS. Gregory is notorious for freezing out lay Catholics and priests who dare to criticize the ultimate source of the wounds: a gay mafia that has promoted pederasts for decades.

Gregory, of course, knows these concerned Catholics are right. Recall that during the first iteration of the abuse scandal in the early 2000s he acknowledged that the priesthood was dangerously close to becoming a “gay profession.” But Gregory is too addled with compromise and modernism to lend wounded Catholics any real aid. A protégé of the wicked Joseph Bernardin — a deviant of staggering proportions who, with the help of the media, passed himself off as an ecclesiastical Mr. Rogers — Gregory was selected by the Bergoglio gang to perform devious mop-up for the sociopaths who preceded him.

How business as usual are things in the D.C. archdiocese? So much so that the disgraced Cardinal Wuerl’s right-hand man, Monsignor Charles Antonicelli, is serving the same role for Gregory; so much so that one of McCarrick’s protectors, Mario Dorsonville, an auxiliary bishop, is bunking at the palatial penthouse that Gregory now occupies.

So much for Gregory giving the archdiocese a “fresh” start. Had I not discovered McCarrick living with Dorsonville in a seven-figure archdiocesan property last year, the duo would still probably be living there. That Gregory would select as his flatmate a Latin American hack (Dorsonville is Colombian-born) who ran interference for a rapist tells you everything you need to knew about what a sham the modern Church has become. Co-consecrated a bishop by Cardinal Óscar Andrés Rodríguez Maradiaga, who is one of the most notorious enablers of the gay mafia close to Pope Francis, Dorsonville is much given to babblings about “social justice” — a “commitment” that somehow doesn’t include holding molesters like McCarrick accountable.

I went over to Gregory’s penthouse recently to see if I could learn more about the Gregory-Dorsonville alliance. I, of course, was stonewalled left and right. Building officials wouldn’t even acknowledge that Dorsonville lived there. Never mind that I had confirmed his presence there through a clueless receptionist who had gone to look for him after I confidently declared, “I am here to see Bishop Mario Dorsonville.” That head fake displeased the pastor of Our Lady Queen of the Americas (the parish below the penthouse) with whom I shortly thereafter got into a row. He couldn’t kick me out of the building, but he refused to entertain any questions about Dorsonville and Gregory.

The Our Lady Queen of the Americas building, which is in the neighborhood commonly called Embassy Row, is a very odd set-up: at the top of it is a multimillion-dollar residence replete with marble, rugs, and artwork while on the other floors exist a neglected, déclassé parish and jobs/learning center for illegal immigrants called the Washington English Center. This last is funded by liberals and socialists from outfits like the Herb Block Foundation (Block was the communist cartoonist for the Washington Post). I was told that Cardinal Wuerl went to great lengths to avoid the plebes below him; a former pastor of the Our Lady Queen of the Americas parish told me that he had never spoken to Wuerl. Apparently, Gregory is making a little bit more of an effort. I was told that he actually said Mass at the parish a few weeks back.

Gregory’s taste for high living got him into trouble in his last assignment. Atlantan Catholics smacked him down for trying, in the supposed austere age of Pope Francis, to build a mansion in Buckhead, the Beverly Hills of Atlanta. Thanks to McCarrick and Wuerl, who spent millions on unnecessary residences, Gregory can now indulge his penchant for posh comforts — a tendency that led his priests to call him the “Queen of the Nile,” a reference not to his race but to his Cleopatra-like imperiousness.

Why Gregory is bunking with a Maradiaga protégé cries out for greater scrutiny. Dorsonville has now lived with McCarrick, Wuerl, and Gregory. He has become one of the hinges on which corrupt Wuerlworld hangs.