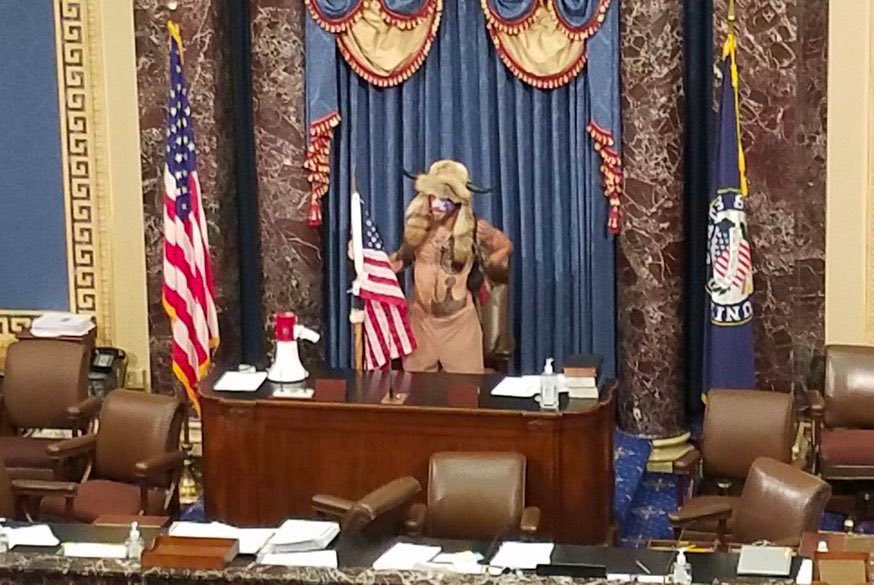 Often just causes are ruined by an idiot. I remember once when I was a kid in school we wanted to avoid a math test. All of the class joined up to reason with the teacher as to why we wanted to postpone the exam, which we deemed too early for our limited knowledge on the subject matter. We were close to convincing him when some idiot spray-painted “Death to Pi” on his office door. Ingenious but irresponsible. Naturally we took the test. Naturally we failed. And we also went without playtime that week. Something similar happened on Wednesday at the Capitol.

Sometimes a photograph is enough to know which side you are on in a conflict. Mine will never be the one with the furs, the horns and the bare chest, an image which seems to have come straight from a documentary about the Freak Pride Parade. Here’s a tip for selecting friendships and alliances: if you can’t sit him at your table for a Sunday meal without feeling embarrassed, he is not your type, and I seriously doubt that Melania would accept anything with horns and a snout at her table unless it’s the main dish, accompanied by mushroom sauce and with an apple in its mouth. As a conservative, I like calm, good manners, and being right. I will have nothing to do with Vikings who break windows, assault parliaments, howl, and take selfies stealing lecterns, providing solid proof that stupidity unavoidably leads to rudeness.

What we have seen this week on Capitol Hill is so stupid, so animalistic, and so crude that it would be a great script for an upcoming Michael Moore documentary, likely a smash hit on National Geographic. As a conservative, I like individuals, not herds. And I like both freedom and individual responsibility. Drunk with injustice, Trump, in a matter of hours has irresponsibly ruined his brilliant management of the past four years, and with it, the hopes of millions of citizens. I know he didn’t order a raid on the Capitol. I know that on Friday he announced that he was outraged by what happened. But it was too little, too late. To anger a mass of angry voters, led by small groups of flat earthers was, at the very least, reckless. Rule number one of political leadership: in a crisis, it is best to take advice, and not just from people who tell you exactly what you want to hear.

The irresponsibility that characterizes the left in stirring up street hordes can never become an excuse for the right to do the same. Among other things, because they don’t know how to do it. Little does it matter that you are in the right if you then go wrong. You don’t attack Parliament. You don’t assault Parliament. You don’t lay siege to Parliament. Keep your hands off Parliament. All the freedom that emanates from the American Constitution is based on respect for the significance of those stones that were violated by a tribe of Martian abductees, who in no way represent the sum of American right-wing voters, who have had to look on as they send that Whatsapp emoticon covering its eyes. Once again, the Colombian Gómez Dávila hits the nail on the head: “we always end up being ashamed of having shared a collective enthusiasm”.

The next generation of Republicans will pay for this for years to come. And with them, all Americans. Next up is a restriction of freedoms, an increase in state power, and the nullification of political debate by discrediting one side, which is the specialty of the left. It has been given the perfect excuse. Thanks to the raiding hordes an imbecile like Joe Biden has been legitimized, and today even seems akin to Mother Teresa of Calcutta. Fortunately the shadow of Kamala Harris still looms dark over us, lest we forget the founding presence of Satan in his government program.

Everything has been done so terribly, that even an illiterate like Nancy Pelosi has permitted herself the luxury of imparting lessons. Of course, she has shot herself in the foot: “We are a rule of law, not a monarchy with a king.” Look, lady: I am Spanish, we are a rule of law, and if we are, it is only thanks to the King of Spain, our democracy’s last defense, time and again since 1975, every time someone has attempted an authoritarian coup. Perhaps it would be better to stick to tidying up the office, which has been left looking like a pig sty, and forget about the democracy master class for a while.

After the desolation comes the question: What now? The usual. Rebirth. What saves conservatism again and again is its capacity for self-criticism, a secret ingredient in the moral and intellectual cocktail that guides our steps, unknown to the left. It is time to turn page and put this latest battle away in the drawer, never knowing now who was right. Personally, I see only one imminent solution for us conservatives to overcome this untenable crossroads with the dignity of a good patriot: to get drunk and head out to some farm to go hunting for things with horns.

Later it will be time for a new leadership based on ideas, not on dialogue, which is the magic word with which the media magicians of the left tie up the right, who in turn seem ever willing to fall into any kind of trap. It will take more opposition than ever. Biden-Harris is going to ruin the country and assault the Capitol with a smile every day, with the support of Twitter, Facebook and the new agents of the digital order of public opinion, in the hands of the children of the radical left who hide their millionaire earnings in the collars of their horrible turtleneck jumpers. By the way, someone should tell that annoying Mark Zuckerberg to stop, at least for five minutes, trying to save all of damn humanity.

For a long time, Trump and the assault on the Capitol will be the left’s excuse to settle any debate without even hearing the opinion of the other half of the country. Any issue you want to debate will end up going more or less like this: “if you don’t think like me, you’re a capitol-assaulting-fascist.” Whether it’s abortion, foreign policy, or a new regulation requiring every citizen to donate their right kidney to the IRS.

The only thing that can be effective in the face of this cordon sanitaire against conservatism is unity on the right. The temptation to split up will be great. The left will do anything to make it happen. And when I say anything, I mean anything and everything. Harris is not the kind of woman to settle for four years in power.

I guess a large part of this mess is thanks to the idiot with the horns, to those who encouraged his pathological and ridiculous freak-assault, to Trump’s patronizing first declarations on Wednesday, and to the rude guy who put his feet on Nancy Pelosi’s table, reminding me of some old advice a military man gave to me one time, and which should always be kept in mind: “If you ever consider backing a coup d’etat, don’t do it. But if you have no choice but to do so, never do it with men who would scratch their balls in front of the television cameras at the height of an assault on parliament.” Aesthetics also count.