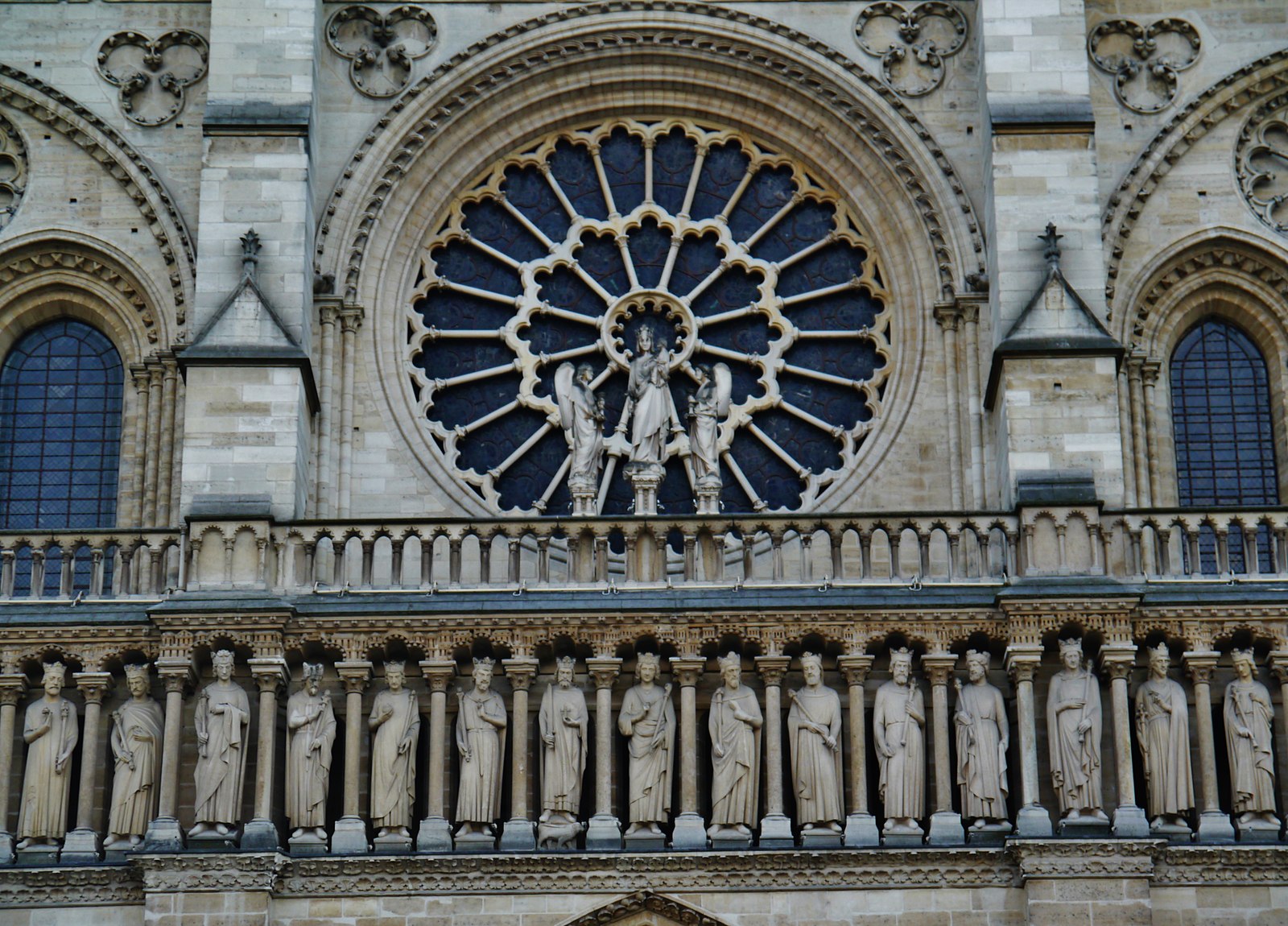 Having witnessed the rising action in Grisy-Suisnes, the climax in the Chamber of Deputies, and the denouement that followed, it is tempting to end the performance on a high note, and with a curtain call, but remember that this is a tragedy, and tragedies are predicated on cruelty, on spectacular horror, and above all on dramatic reversals of fortune. Falling action often conceals the coming catastrophe. Barrès himself considered the victory far from complete, and predicted that parliamentarians would remain tempted to treat “that which is sublime in the manner of a basoche [a solicitor, notary, bailiff, etc.].” And he acknowledged that his achievements came too late for the church of Saint-Médard, torn down and desecrated as it was in those grim early days of 1910. It would not be until 1966 that the town of Grisy-Suisnes would receive a replacement, the appropriately-named Notre-Dame-des-Roses. Designed by the Slovak architect Anton Korady, the church is vehemently, unapologetically modern. Swathes of concrete, severe angles, and idiosyncratic elements (pagoda-like curves on the roof, De Stijl-influenced stained glass) predominate. Notre-Dame-des-Roses is thought by some to resemble Saint Peter’s boat, or perhaps a fish; others insist that the building has the shape of an inverted rose, with the bell tower for its pedicel, though no rose was ever so angular, no slender stem so oddly wedge-shaped. From certain viewpoints it looks more like a Spanish morrión helmet. In any case, Notre-Dame-des-Roses represents a stereotypical example of uninspired post-war modernist ecclesiastical architecture, providing ample evidence for Duncan Stroik’s assertion that “in the 1960s after the Vatican Council, there was a great surge of construction of austere churches which often resembled commercial or factory buildings, bearing out the belief that they were mandated by the spirit of Vatican II.” Such “reductionist buildings,” Stroik continued, come across as the “the direct corollary of Church teaching, modern liturgical studies and contemporary theology.”

From an architectural standpoint, the modern structure simply cannot hold a candle to its medieval predecessor, a state of affairs indicative of a larger issue in the Church. The aesthetic consequences of the Second Vatican Council — in liturgical, musical, and even architectural terms — have been positively catastrophic, and alienating to anyone of any aesthetic sensitivity. Martin Mosebach, in The Heresy of Formlessness: The Roman Liturgy and Its Enemy, put it best:

I admit quite openly that I am one of those naive folk who look at the surface, the external appearance of things, in order to judge their inner nature, their truth, or their spuriousness. The doctrine of supposedly “inner values” hidden under a dirty and decrepit shell is something I find highly suspicious. I already believed that the soul imparts a form, a face, a surface to the body, even before I learned that it was a truth defined by the Church’s teaching authority. Consider me a Mediterranean primitivist, but I do not believe a language that is untrue, full of deceit, and lacking in feeling can contain ideas of any value.

The same goes for architectural language. One shudders at how low things have sunk in this regard, and how the most insidious threat invariably comes from within and not without. By destroying structures like Saint-Médard and replacing them with structures like Notre-Dame-des-Roses, we have become unlinked from the great chain of tradition that once secured us to our heritage. Contrasting modernity with the Middle Ages, Viollet-le-Duc posited that

No municipality then [in the thirteenth century] would have dreamed of imposing on every proprietor on the same street a…uniform style of architecture; and in that century, which some point to as a time of oppression, the idea of molding the habitations of thousands of citizens on the same type would never come to any authority. Each person then was too conscious of his individuality, of his personal responsibility, to suppose that men could be penned like animals in a zoological garden in identical barracks to amuse the eyes of idle passersby.

Maurice Barrès expressed a similar sentiment, albeit more succinctly: “a strange rage,” he wondered, “this modern mania to give a common manner to all minds.”

That strange rage still fuels our own age of vandalism, as the next act of this tragedy continues to be written. Modernists have always despised Romanesque and Gothic architecture, allied as they are with those who would write off the past entirely. Le Corbusier, in his 1937 book When the Cathedrals Were White, proclaimed that “the cathedrals belong to other people — to the dead — they are black with grime and worn by centuries. Everything is blackened by soot and eaten away by wear and tear: institutions, educations, cities, farms, our lives, our hearts, our thoughts. Nevertheless, everything is potentially new, fresh, in the process of birth. Eyes which are turned away from dead things are already looking forward.” What Le Corbusier had in his modernist mind’s eye when he looked forward, however, was his so-called Plan Voisin, a proposed redevelopment of central Paris that would have turned the La Ville-Lumière into a concrete, dystopian hell-scape of serried, identikit skyscrapers. Victor Hugo had understood that medieval monuments are “lieux où le coeur met ses chimères,” “places where the heart puts its fantasies.” The sterile monuments to modernity erected in our own increasingly hideous age are places where the heart finds nothing but banality and spiritual poverty, rather than fantasy and wonderment, yet we return to our folly again and again, in the manner so graphically described in Proverbs 26:11.

Edouard de Lamaze, president of the Association Observatoire du Patrimoine Religieux, has assumed the burden once borne by Maurice Barrès, warning that France is losing on average one religious building every two weeks (while, quite symbolically, one mosque is erected every fifteen days); that five thousand ecclesiastical structures are endangered and thirty thousand are in a state of decay, vulnerable to theft or fire; that acts of vandalism have increased five-fold over the last decade; and that while the “current minister of culture is seeking to establish a protection charter … the situation is extremely serious and, alas, I don’t see any real awareness growing, nor any sense of responsibility in the face of this crucial challenge for our national heritage.” Recent years have seen, for example, Notre-Dame de Paris, Saint-Alain de Lavaur, Saint-Pierre-et-Saint-Paul de Nantes, and the church of Saint-Pierre in Romilly-la-Puthenaye consumed by fire, the Chapel of Saint-Martin in Sablé-sur-Sarthe bulldozed in favor of a parking garage, and the Chapelle Saint-Joseph in Lille demolished to make way for a student building, over the objections of the non-profit Urgences Patrimoine. The church of Sainte-Germaine-Cousin in Calais, Saint-Èloi du Poirier in Trith-Saint-Léger, and others are slated for destruction. “Year after year, we will see religious buildings collapse from one end of France to the other,” Maurice Barrès warned in La grande pitié des églises de France. More than a century on, the destruction is continuing apace, as historic churches remain “exposed like martyrs in the arena.”

The destruction of churches in the French countryside, according to Barrès, was directly related to the destruction being wrought in the French countryside itself. When a bell-tower came crashing down, it provoked the same feeling in him as when “a forest was cleared, or when a beautiful tree is felled without providing it with a successor.” All the earth, Barrès maintained, “is enclosed in a divine network, and I would not like to see any of the innumerable links broken [la terre est enserrée dans un réseau divin dont je ne voudrais rompre aucune des mailles innombrables].” But no longer could he find in nature “the fully-formed gods of the Ancients,” he observed mournfully,

and for me it is full of half-defeated gods.… Alas! today the lake chapel is in ruins, its oculus extinguished, and the village church itself is threatened. Like the chemicals that Industry pours into our rivers, like the coal slag with which it clogs our valleys, increasingly filthy rubbish accumulates in the human mind and opposes all those products of the soul: intuition, mystery, poetry…. Such bold ingratitude! We must save the ancient realm of the spirit; it is necessary to release and unify the whole domain of the sacred.

Here Barrès begins to approach a sort of pagan-Christian syncretism: “it is time to complete the reconciliation of defeated gods and saints,” the better “to save the pure springs, the deep forests, as well as the churches. And to maintain the spirituality of our people, I ask for an alliance of religious feeling with the spirit of the earth.” Thus, like Nicolás Gómez Dávila, Barrès was yearning not just “for the futile restoration of the past, but for the improbable rupture of the future with this sordid present.”

This, to my mind, remains the way forward, however far-fetched it may seem. As Barrès argued during his campaign to preserve French churches, the politicians’ “victories are small and petty,” whereas “our spiritual laws will not be modified to follow the whims of legislators.” But if  we do allow such sacred laws to be modified, and we forget that “a people has in its soul a sanctuary that it must constantly tend in order to restore,” we will eventually find ourselves “in the middle of a universe of dry clarity,” wherein we will either perish of spiritual starvation, or be slowly subsumed into the egregore of post-modernity. The struggle against the forces of modernity must for this reason be waged close to home:

The churches of the village, the French countryside, dark forests, living springs, ponds in the depths of the woods, how it all sounds harmoniously together! May we piously piece together these pieces, organize our relationship with these foggy truths, and witness the return of the poor local gods to the ark of the divine, their purification and their salvation; may we reconcile them with the One who presides over our civilization, and create in us the most splendid unity against the vulgar barbarians.

Barrès endeavored to “return to the places where the sense of my destiny was formed in me,” to “return to the primitive.” His was a cri de coeur we would do well to heed as the next, though hopefully not the final, act of this melodrama unfolds.

There is one more inscription chiseled into the smooth Euville limestone of the Monument Barrès, on the side facing east from the hill of Vaudémont. It features well-chosen lines borrowed from Les amitiés françaises, Barrès’ 1903 meditation on the theme of regionalism, on those “petites patries” or “little homelands” where lasting social bonds are embedded, and from which those bonds radiate outwards. As an epigraph, and as an epitaph, those words are altogether appropriate, and provide us with a fitting envoi:

[In this country of the Moselle, I have come to know myself as a gesture of the Land, as a moment in its eternity, as one of the secrets that in each season our nation lets emerge in bloom, and if I feel enough love, it is I who will become its heart.]

Matthew Omolesky
Follow Their Stories:
View More
Matthew Omolesky is a human rights lawyer and a researcher in the fields of cultural heritage preservation and law and anthropology. A Fellow of the Royal Anthropological Institute, he has been contributing to The American Spectator since 2006, as well as to publications including Quadrant, Lehrhaus, Europe2020, the European Journal of Archaeology, and Democratiya.
Most Popular
Sign Up to receive Our Latest Updates! Register