The Talkies Film,Film Review,Literature,Movies,World War I All Quiet in the Audience? - The American Spectator | USA News and Politics
Menu
The Talkies
All Quiet in the Audience?
The new version of a World War I classic raises uncomfortable questions about war movies, and those who make them.
by Bruce Bawer
Felix Kammerer as Paul Bäumer in the 2022 film adaptation of “All Quiet on the Western Front” (Netflix/YouTube) 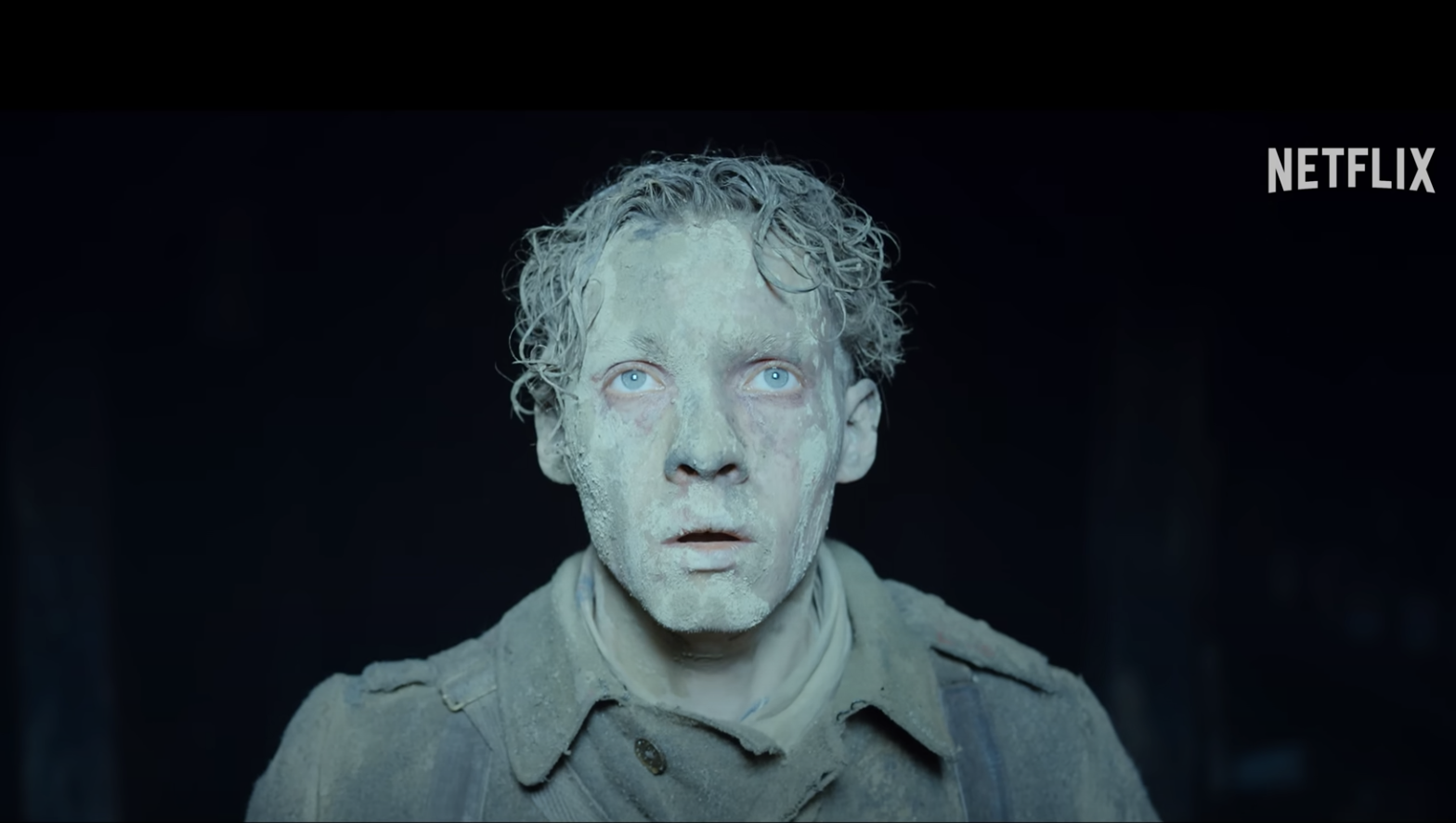 The original Hollywood adaptation of Erich Maria Remarque’s bestselling 1929 novel All Quiet on the Western Front (Im Westen nichts neues) hit America’s movie houses in April of 1930. Considering that the first talkie, The Jazz Singer — a semi-talkie, really, in which the sound quality was pretty primitive — had been released only two and a half years earlier, All Quiet, directed by Lewis Milestone from a screenplay by Maxwell Anderson (the distinguished playwright) and George Abbott (later a top Broadway director), was a remarkable achievement: a war epic that’s still not just watchable but downright effective, right up to its heartbreaking final shot — as in both camera shot and gunshot.

The premise is as simple as can be: during World War I, a class full of wet-behind-the-ears German schoolboys, after being given an earful by their teacher, Professor Kantorek, about the glory of military triumph and the privilege of dying for one’s country, eagerly sign up to fight in Flanders — only to be picked off, one by one, in the ingloriously muddy trenches.

The film — starring Lew Ayres as Paul Bäumer, who transforms from a starry-eyed youth into a hardened, cynical hater of war — won the third Academy Award for Best Picture. In Europe, it attained a different kind of recognition. After Nazi thugs who hated its antiwar message violently attacked theaters where it was being shown, the German government banned it. Similar bans in France, Italy, and Austria weren’t lifted until many years after the end of World War II.

A TV remake (unseen by me) was broadcast in 1979. And now Netflix is streaming a new version, in German with English subtitles, directed by Edward Berger from a script he co-wrote with Lesley Paterson and Ian Stokell.

For all its up-to-date visuals, All Quiet is, like its 1930 predecessor, the prototypical no-frills “war is hell” movie.

What to say about this picture — which, by the way, is Germany’s candidate for this year’s Oscar for Best International Feature Film? Well, to begin with, the people who made this thing pulled out all the stops. The lighting, visual effects, and cinematography (by James Friend) are breathtaking; this is epic filmmaking on a monumental scale, with armies of extras in uniforms charging across bleak landscapes with rifles and exploding to pieces before our eyes.

Yet it doesn’t pack anywhere near the kind of a punch that Milestone’s original apparently did in 1930. It’s oddly inert. Leaden. Even, despite the stunning production values, dull. How can this be? Part of the reason is the slow pacing — shots held too long, conversations that drag on long after the point’s been made. After I saw it, I watched parts of Saving Private Ryan for the 10th time and reflected that Spielberg could’ve taught Berger a few things about building tension. But there’s also this: in 1930, a small-town lad or farm boy, spurred by wide-eyed dreams of martial derring-do, could rush off without a second thought to enlist in some newly declared war, no matter what its purported grounds. Today’s kids don’t know a lot, but they know better than to do that. If Platoon and Salvador, or even Saving Private Ryan, are too ancient for them, at least they’ve seen 1917 or Dunkirk or Hacksaw Ridge. Or something that’s given them an eyeful of what war is really like. And even if they’ve never seen a war movie, they’ve had teachers who, far from being wild-eyed war-boosters, like Professor Kantorek, were outspoken peaceniks.

And that goes at least double for those of us closer to old age than to youth. Not only are we familiar with Platoon and Salvador; we may even have seen Jean Renoir’s 1937 antiwar masterpiece Grand Illusion. In fact, unlike our counterparts in 1930, most of us, if we’re longtime cinema fans, have been told that war is hell by dozens of films. Most were forgettable. A few made a lasting impact on us by offering a fresh twist: the gallows humor of Catch-22, the grand operatic style of Apocalypse Now, the use of Russian roulette in The Deer Hunter.

Alas, the 2022 take on All Quiet comes without anything resembling a fresh twist. For all its up-to-date visuals, it is, like its 1930 predecessor, the prototypical no-frills “war is hell” movie, complete with callow soldiers experiencing that first raw horror of mass slaughter and, afterwards, in their shell-shocked downtime, trying inarticulately to come to grips with the point of it all: “Why are we here? How do wars start, anyway?” In 1930, that was powerful stuff. Not in 2022. (READ MORE from Bruce Bawer: Pro-Abortion Film Call Jane Is Garbage)

This isn’t to say that Berger’s picture doesn’t have its merits. I have to admit that the early sequence in which the boys’ teacher encourages them to march off to combat is better in the new version. Part of the reason is that his harangue, which goes on too long in the original, is blessedly cut down to the bare essentials. Another part of the reason is that — hello — this time it’s actually in German. And as good as Arnold Lucy, a British stage actor, was at playing Kantorek in 1930, let’s face it: you need a real German (in this case, Michael Wittenborn) to bark out words like “Fatherland” and “Kaiser” in a way that shows he means business and to wax half-crazy — in a way that brings to mind Bruno Ganz as Hitler in Der Untergang — about capturing Paris.

Plotwise, Berger more or less tracks Milestone. The main exception is that, unlike Milestone, he includes sequences — with no basis whatsoever in Remarque’s novel — in which he abandons Paul and his chums for a while and gives us glimpses of the men who decide their futures. In some of these sequences, we see diplomats haggle over the conditions of the armistice in Marshal Foch’s famous railway carriage in the forest of Compiègne. What’s this material doing here? As other critics have noted, it seems designed to push on us the view, long popular in Germany, that Hitler, World War II, and the Holocaust might never have come along if only the victors in World War I hadn’t forced such punishing terms on the losers. It also adds a touch of suspense: while the big shots dither over truce terms, Paul and the other boys at the front continue to risk their lives.

Berger adds other new sequences as well. In them, we see splendidly uniformed members of the German High Command in sumptuous settings far from the front, arguing over glasses of wine about whether to end the war or not. These conversations — in which terrible casualty figures matter less than questions of national honor — show us just how indifferent non-combatants can be to the lives of the young men who are doing their fighting for them. In doing so, they take the place, in Berger’s remake, of a stretch of Milestone’s original in which Paul, back home on leave, listens impatiently while one of his father’s friends and, later, his own former teacher, Kamorek, mouth platitudes that he’s come to recognize as hollow and deadly.

A word about Felix Kammerer, the Viennese stage actor who plays Paul in the new All Quiet. He’s even more of a baby-faced naif at the start of this tale than Lew Ayres was in the 1930 original, and whereas war turned Ayres into a rather one-note acid cynic, it turns Kammerer into a tragically broken soul who is also, at the end, when he comes face-to-face with a French soldier in the last moments before the armistice is scheduled to take effect, nothing less than a savage. His transformation is chilling — easily the most compelling thing in Berger’s remake — and Kammerer pulls off every bit of it magnificently.

One last point. There’s something uniquely problematic about a German movie with a “war is hell” theme. Yes, war is hell, but we fought the biggest one ever against the Germans, and we did it for damn good reasons. When a German film dares to tell us that war is hell, our first reaction should be: Yes, and Nazism was an even worse hell, and don’t you forget it. Berger’s movie ends with white title cards on a black background listing the body counts for World War I. Three million dead on the Western front. Almost 17 million total dead in the war. Horrible, of course. Yet once again it’s hard not to feel as if one is being nudged, just a tad, to relativize the scale of the Shoah. Perhaps the ultimate lesson of this latest take on All Quiet on the Western Front is that German filmmakers should leave this sort of stuff alone, and stick to making those wacky comedies they do so well.