Armed with a smartphone and a Twitter account, every day she makes national news by prating pure blather and blatant baloney, the latest drivel popping into her head. The media reports on her wherever she is, dutifully bannering her words front and center. In Texas, campaigning for a Democrat House candidate, she muses about turning blue a state that she does not understand, where Hispanics from Mexico, Guatemala, and other locations have been flocking to the GOP in major shifting voting patterns unlike her Puerto Rican base in the Bronx and Queens.

Heckled during one campaign stop, she responds with incendiary anti-Semitic falsehoods aimed at awakening the woke to whom her Squad compatriots, Ilhan Omar and Rashida Tlaib, more frequently appeal: “I don’t believe that a child should be in a cage on our border, and I don’t believe a child should be in a cage in the West Bank.” Huh? Even Israel’s worst haters have never before alleged that they confine Arab children to cages. Israel’s borders do not teem with illegals who cannot immediately document their right to be present. She stumbled so shamefully because she perilously decided mid-speech to think quickly — not her forte. And then she blurted. That is her forte.

When she does not make news by blurting verbal sewage and lies, magazines keep her spotlighted with cover features. Thus, she was in the news all week as the New Yorker devoted its February 14 cover to a lead interview with her, presenting her as “an insider now.” The writer first adulates her with hagiographic language: “Elected when she was twenty-nine, the youngest woman ever to serve in the House, [she] has proved herself an effective examiner in committee hearings and a master of social media. In other words, she offers both substance and flair, and this combination seems to drive her critics to the point of frenzied distraction.”

Frenzied distraction? Really? One almost hears her own tweet, ascribing all criticism as emanating from “Republicans who are mad they can’t date me.” An amazing level of narcissism. Or is the inference that others criticize Nancy Pelosi because they cannot carbon-date her?

In her magazine interview, Ocasio calls on Joe Biden to wield executive powers to cancel student loans. And then — the reader almost can hear a wire shorting in her cerebrum — she spits out that, if he does not do so and also get his infrastructure bill through, America may not be a democracy in 10 years. Her disconnect from reality is remarkable: “I think there is a very real risk we will not [have a democracy in a decade].” Can you hear in those very words reverberations of her saying three years ago that the world will end in 12 years if we do not immediately follow her prescription for the climate? Then, once unhinged from reality, she is on a roll: Jim Crow is returning. Florida is enacting “poll taxes.” The public schools are teaching history “with institutionalized propaganda from white-nationalist perspectives.” As for the horrific surge in violent crime across the country, particularly in inner cities where Soros-funded district attorneys have been elected, she dispenses this wisdom:

“The surge in violence is being driven by young people, particularly young men. And we allow the discourse to make it sound as though it’s, like, these shady figures in the bush, jumping out from a corner. These are young men. These are boys ... Because we run away from substantive discussions about this, we don’t want to say some of the things that are obvious, like, Gee, the child-tax credit just ran out, on December 31, and now people are stealing baby formula. We don’t want to have that discussion.” (Emphases added.)

So surging murderous crime in New York City stems directly from the impending end of the child tax credit. Inasmuch as we no longer will contribute to others’ children’s Gerbers and Beech-Nut grated fruit jars or Similac, that accounts for record robberies, carjacks, murders, and other violent crimes in the era of the Soros DAs. That’s why Manhattan homeless push people off subway platforms into oncoming trains, why others stab store clerks in the chest at fashionable furniture boutiques on La Brea, why they shoot kids to death in front of their mothers on Saturday nights in Chicago. It’s those jars of grated pineapples no longer subvented for those on the dole.

In a moment of reflection as her New Yorker interview ends, she concludes with metaphoric profanity: “And so the day-to-day of my day job is frustrating. So is everyone else’s. I ate sh-t when I was a waitress and a bartender, and I eat sh-t as a member of Congress. It’s called a job, you know?”

She grates, doesn’t she?

This is her essence after the doting fluff and adulating media encomia are set aside: the lights flashing, the bells clanging, the rails moving — but no train coming. Nothing there. She knows we had a president named Franklin Roosevelt, that we have a thingie called a Constitution, that it has amendments, and that one of them precludes a president from serving more than two consecutive terms. And then comes the disconnect, the part where the lobe wires suddenly start short-circuiting, sparks flying all over. She concludes they passed that 22nd Amendment to stop FDR from continuing as president, even though G-d had called his ticket by then.

She knows there has been some warming in the climate. The climate is dynamic. Sometimes it gets a bit warmer, sometimes a bit colder. Something about cows passing gas without saying “Ex-moo!-se me.” And then those dots connect for her three years ago with the takeaway that the world will end in 12 years. Thus Spake Zaracasio. 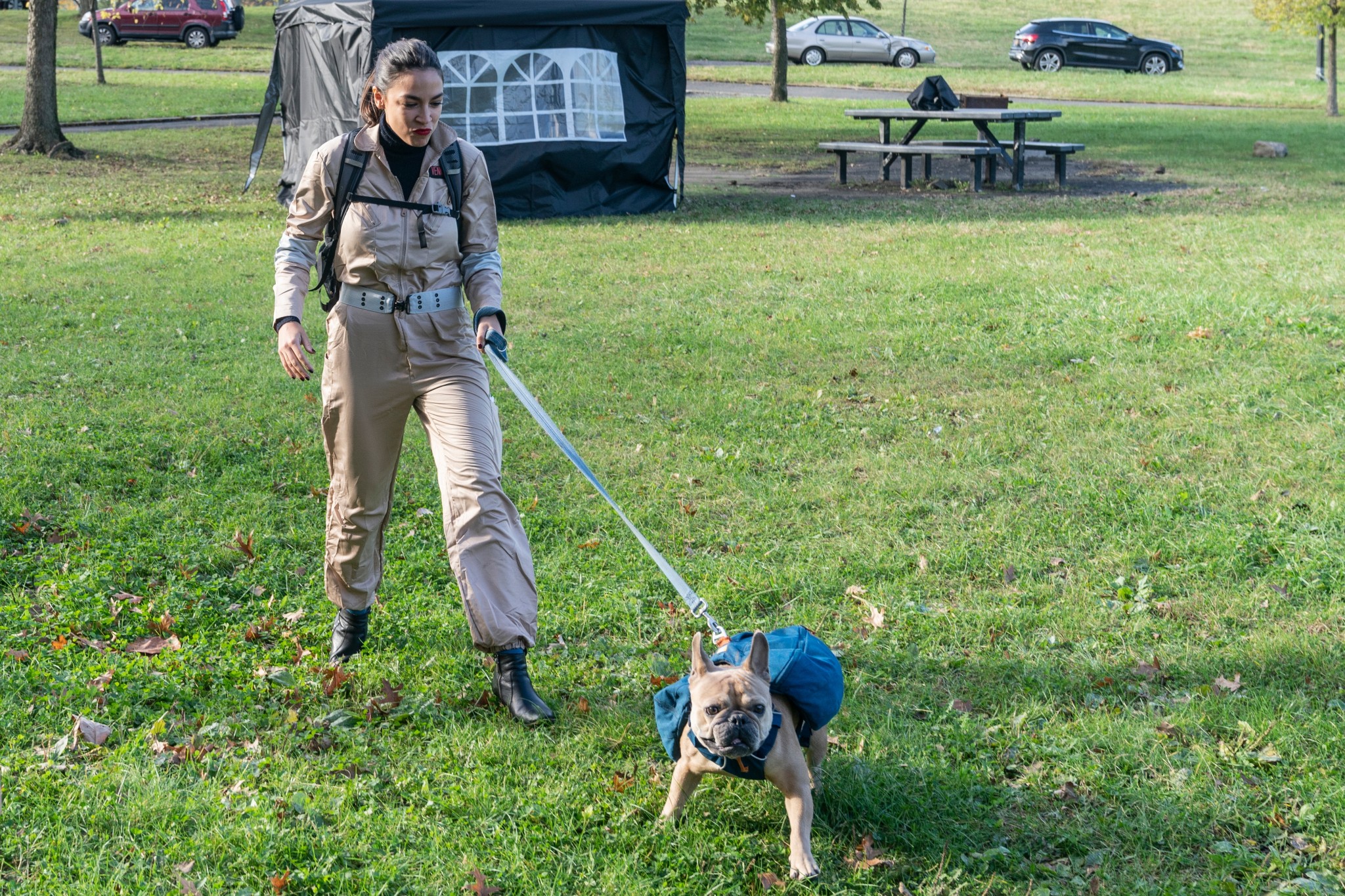 She is an idiot. But does one rebut her? When Ocasio tweets that we are down to nine years, consider how many of her idiot apostles thereby are influenced not to reproduce. Why lose that flat tummy, sustain morning sickness, risk varicose veins, and stop imbibing Makers’ Mark if it all ends before the New York Jets complete their 1969 rebuild? Conservatives and the religious continue having kids. But those on her side suddenly have a reason not to replicate.

She is “followed” by idiots on Twitter, “liked” by idiots on Facebook, and “clicked” by idiots on YouTube. If her doomsday predictions reduce the population of those cloned snowflakes, responsibility commands holding our peace. Yes, Alexandria, exactly as you say. We are bicycling across the Pacific, fortified by fair-trade kale.

The idiocy extends in each direction that the short-circuit sparks fly. Someone — Caryn Johnson? — taught her the secret that some guy named Hitler, assisted by others with names like Heydrich and Eichmann and Streicher and Mengele, murdered six million Jews at places like Dachau, Auschwitz, Sobibor, Bergen-Belsen, Treblinka, Buchenwald, Mauthausen, Theresienstadt, Majdanek, and Babi Yar. I never peeped a word of it to her. But she somehow found out, maybe while being fitted for her “Tax the Rich” Aurora James designer dress. Armed with a factoid, she traveled to the Mexican border and declared that Immigration and Customs Enforcement are Nazis and that our humane compassionate shelters where ICE feeds, clothes, and protects people who are here illegally are just like Dachau and Auschwitz.

Her hatred of Israel is legion. She even cried on the House floor when Congress voted 420-9 to replenish defensive Iron Dome missiles that detonate Hamas terror rockets aimed at murdering Israeli civilians. Yet, when given the opportunity, she cannot explain her anti-Israel animus. Responding to PBS interviewer Margaret Hoover asking her to explain substantively why she is anti-Israel, we see the wires short-circuit again: Uh. Uh. Hmmm. Y’know, the … uh … settlements?? And then, with a laugh: “Y’know, I’m not the expert on geopolitics on this issue.”

Ocasio is the template for the partly educated idiot we occasionally encounter. We all have met our share of educated idiots with degrees, including idiots with six degrees of separation from reality. There was the arrogant runt my freshman year at Columbia who bragged that he reads the Washington Post because, living in New York, he feels it “important to be more cosmopolitan than parochial.” The Times was too local for this citizen of the world. He contemptuously asked me what I read to be less parochial. I remember telling him: “Why, I read Cosmopolitan!”

I refuse to call her by more than “Ocasio.” That’s four syllables, enough for an idiot to consume my keyboard. I think to America’s presidents: Only Eisenhower demanded more than three syllables, and he was copacetic with “Ike.” Besides, he did command us to victory in World War II, so OK. Most have been one or two syllables: Polk, Pierce, Grant, Hayes, Taft, Ford, Bush, Bush, Trump. A syllable is enough. Two or three? Fine. But if she thinks I am going to waste 11 syllables on her — six for her hyphenated surname alone — No Can Do.

She is an idiot. If her mind had been trained, she seemingly could have contributed meaningfully to the public conversation. But the lack of critical analysis or insight is maddeningly manifest. Beech-Nut and Gerber’s grate baby food. She just grates.

To attend any or all of Rav Fischer’s weekly 90-minute classes on the Weekly Torah Portion, the Biblical Prophets, the Mishnah, Rambam Mishneh Torah, or Advanced Judaic Texts, send an email to: shulstuff@yioc.org