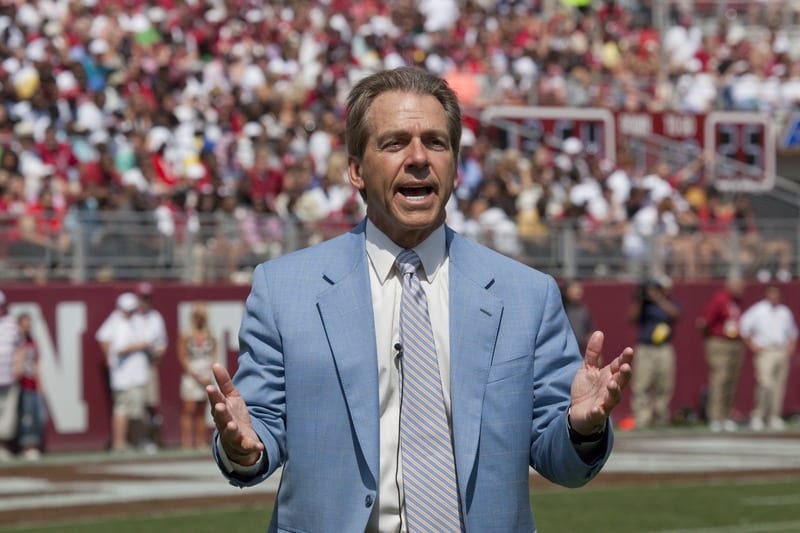 The University of Alabama will play a football game tonight and the winner will be declared the unambiguous number one team in all of college football. Alabama fans expect nothing less. It sometimes seems that in these times, the Crimson Tide plays for the national championship every year… and always wins the game.

Neither is quite true. There was that hiccup, against Clemson, a couple of years ago. Still, the perception is… well, you know.

Alabama has won five national championships since 2007 when Nick Saban arrived in Tuscaloosa to lead Alabama from the football wilderness. The school had grown accustomed, during the reign of Bear Bryant, to winning national championships. But the last of his six came in 1979 and with the exception of the 1992 season, which ended with a memorable defeat of the Miami Hurricanes, there had been no national championships. This was a long, parched time of wandering the desert. Coaches came and went. There were NCAA sanctions. There had even been six consecutive losses to Auburn and the rivalry between those two is perhaps the most intense in all of college football. Alabama fans welcome leap year because it gives them an entire bonus day which they can devote to hating Auburn.

Not really. But college football in Alabama is … well, different. You could say that it is more “intense.” But that doesn’t quite get to the kernel of it. And it is hard to find a locution that does. But “intense” falls short, just as “sacred” and “religious” go too far.

Somewhere in-between, then. Or, as someone once said, “Football in Alabama isn’t life or death. It’s a little more important than that.”

Alabama didn’t just suddenly become a football power with the arrival of Nick Saban or, before him, of Bear Bryant. Not quite a century ago, the team took a train all the way to California to play in the 1926 Rose Bowl where it was expected to be a pushover for the Washington team. The Tide won 20-19 and Alabama’s star player, Johnny Mack Brown, made his way back to California to become a western movie star.

The Rose Bowl victory was treated as some sort of validation of southern football. And, perhaps, of the South. So a sort of theme was born. According to this thinking, Alabama played winning football since it couldn’t win at anything else. It just meant so much to “them” because… well, you know. And, of course, it was a long time before any African Americans wore those crimson jerseys.

If Alabama football today makes some sort of racial statement, then it would be hard to deconstruct what, exactly, it is. And if the state is some sort of sharecropping backwater, then how to account for the fact that the American city with the most PhDs per capita is Huntsville. Alabama is vastly more cosmopolitan and lovely than, say, Illinois.

If passion for the Tide was once fueled by resentments and a sense that the players could just as easily have been wearing the Grey… well, probably, contra Faulkner, sometimes the past is just the past.

Alabama football is the same now; only different. It is, as pure football, what has always been. Something that transcends simple “sport.” Before he was a coach, when he was a member of one of those Rose Bowl teams, Bear Bryant played an entire game on a broken leg.

Of course he did. Alabama football would, you see, demand nothing less of him. When he was offered the job of head coach at Alabama, Bryant reluctantly broke a contract with Texas A&M and explained it by saying, “Mama called.”

Nick Saban unquestionably draws on the passion of a long and successful tradition of winning football. And the passion for the Tide is a fine kind of madness that does what sports should do for the fan. There is a lot of life about which it is impossible to feel the kind of wonderful intensity that accompanies an Alabama football game. Particularly one where the stakes are as high as they will be tonight.

The Tide’s opponent is Clemson. These two teams have played for the national championship twice in the last three years. They split two exceedingly close and exciting games. The kind that leave fans almost as spent as the players.

The game tonight will be played in California, somewhere around Santa Clara, in something called Levi Stadium for reasons of… well, who knows. Television, perhaps. Big corporate deals. And who, by the way, names a football stadium after a pair of pants?

Clemson is in South Carolina. The University of Alabama is in… well. So fans and students who wanted to see the game were obliged to travel across the country and pay California prices for food and lodging in order to see the game in person.

Hard to know if the emotion and the spirit will travel and if the long, passionate war cry of Rooool Tide will sound the same.

Should be a good game, though.

The Tide seldom plays any other kind.

Which is kind of the point.