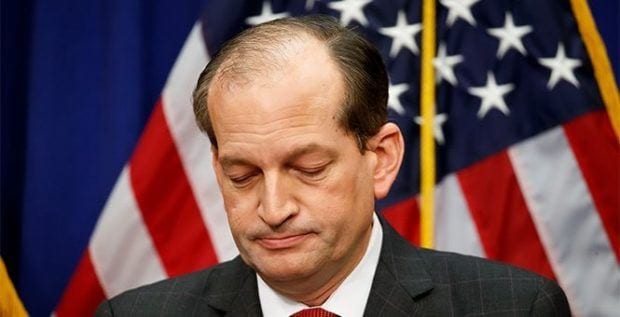 Alex Acosta resigned as labor secretary Friday morning. It was inevitable once he became the target of all virtuous people in Washington for negotiating a 2008 non-prosecution agreement that put superrich sex offender Jeffrey Epstein behind bars for 13 months and required him to register as a sex offender and agree to pay restitution to his many teenage victims.

The Senate knew about the deal in April 2017 when 60 senators — including Sen. Catherine Cortez-Masto (D-Nev.) — voted to confirm Acosta. Three things have changed since then.

In November, the Miami Herald ran a series, “Perversion of Justice,” about the deal. In February, a federal judge ruled that Acosta’s team had violated the Crime Victims’ Rights Act in keeping the deal from Epstein’s underage victims. The last straw came Monday when New York U.S. Attorney Geoffrey Berman unsealed a two-count indictment against Epstein, 66, of Manhattan and Palm Beach, Florida, for two counts of sex trafficking of minors. If convicted, Epstein, who pleaded not guilty, could serve 45 years in prison.

If a New York prosecutor can press charges that could land Epstein in prison for the rest of his life, cable pundits reasoned, then surely the case, for which Acosta drafted a 53-page indictment, was a “slam dunk.”

The optics and the outcome are cringeworthy. A scant 13 months in the Palm Beach County jail was a sweet deal for the serial sex offender who raped and assaulted more than 30 teenage girls and took pleasure in degrading them, scarring them, and instilling in them an undeserved sense of self-loathing.

Epstein deserved a far harsher sentence. And it doesn’t help that his Palm Beach County jailers broke protocol by allowing him to leave for 12 hours a day, six days a week, to work at his private office — an arrangement Acosta derided as “complete BS.”

Even still, Acosta had reason to broker the crappy deal. As he told reporters during a one-hour press conference Thursday, a trial would be a true “roll of the dice.” Rather than put Epstein’s traumatized victims through a grueling public tribunal, he chose not to risk an acquittal.

In a 2011 open letter, Acosta described how the Epstein legal team “investigated individual prosecutors and their families, looking for personal peccadilloes that may provide a basis for disqualification” and tried to disqualify at least two prosecutors.

Given that kind of ruthlessness directed at career federal prosecutors, you can see why Acosta might fear the Epstein legal team could capitalize on the reluctance of those young witnesses to testify against him. One Jane Doe had called Epstein “an awesome man” and stated she hoped “nothing happens to (him).”

So Acosta chose a deal that put Epstein behind bars and “put the world on notice that he was and is a sexual predator.” Horribly, the decision gave Epstein opportunities to victimize other girls as young as 14 after he was released. The only thing worse would be an acquittal after a trial.

The deal also did not prevent U.S. attorneys outside the Southern District of Florida from pressing charges — as Berman did in his indictment on two counts of sexual trafficking between 2002 and 2005. Acosta told reporters that over the past decade, he kept reading about investigations of Epstein and he was glad New York “finally” stepped up.

The folks who say that a guilty verdict would have been a slam dunk in 2008 also seem to believe that all of New York and Florida knew about Epstein’s abuse of girls all along. They cite Trump’s 2002 quote to New York magazine about Epstein liking “younger” women as proof.

Please note that quote was years before Epstein was prosecuted and was included in a glowing profile that most journalists who cited the quote probably never read in entirety.

One other thing: The Miami Herald didn’t think the Epstein deal was so outrageous as to merit a series until Acosta was confirmed.

Cortez-Masto, who voted to confirm Acosta, released a statement Tuesday calling for Acosta’s resignation. The former Nevada attorney general told Newsweek she regretted “we didn’t have all of this information at the very beginning.”