Up early to appear on TV talking about the presidential election. Specifically, we were discussing whether it mattered that Mr. Trump has refused to release his tax returns. He said he could not because he was being audited. I like Mr. Trump and I am a Republican, but this is obvious nonsense. Just complete gibberish. A taxpayer need not refuse to release his or her tax returns because he’s in an audit.

However, no law compels a taxpayer to release his tax returns and Mr. Trump is well within his rights refusing to do so.

However, why, oh why is he not releasing them?

There are possible reasons:

He is nowhere near as rich and successful as he has claimed to be. Perhaps he is even operating at a loss. No one really believed he had $10 billion when he said it and no one believes it now. Fine by me. I don’t really think his wealth is at all relevant — except — he made it relevant by bragging about how rich he was. This, he said, showed how smart and capable he was.

But that was obvious nonsense. His university was a fraud. His airline went nowhere. He defaulted and went bankrupt over and over again. His wine is nothing. His food is a joke.

He inherited roughly $300 million, so it is said. If he had just put the money in an index fund and played with girls, and not gone into business, he would be a lot richer than he is. That’s what the experts say.

So, where are his achievements aside from his boasting?

His tax returns may well show that he has not made the “huge” gifts to charity he claims to have made. I just don’t know the answer to this one. He certainly built a fine ice skating rink in Manhattan and he gets full marks for that. But did he really give millions for veterans? I just don’t know.

The tax returns would tell us.

I plan to vote for him anyway, but I would love to see those tax returns.

After TV, a nap, and then a broke friend whose bank account has been “frozen” came over all the way from L.A. to Rancho Mirage to get a big chunk of money from us.

I am getting so sick of people hitting me up for money, I just cannot tell you. This is a nice guy, even a great guy, but my resources are extremely limited and I cannot keep doing this.

Then, swimming in 100 degree heat. Then bill paying. Then the high points of the daylight. A visit to the incredibly pleasant Rancho Mirage Post Office. The people there are truly lovely and one woman in particular helps make out my labels for my express mail envelopes. She’s really a doll.

Ditto the B of A in Rancho Mirage, where all of the tellers and Wendy, the boss, are always as friendly as small town people can be.

Then, reading an  article about what a great spirit the Israelis have even though they are isolated and surrounded by enemies. Israel is the miracle state of the last century. So, naturally, the loser states hate it. Plus, the Leftists, who thrive on perversity and anger and envy, always hate the Jews. Now that I think of it, so do the European Rightists. Only in glorious, heaven-sent America, is there any sympathy for the Jews.

THIS COUNTRY IS SO DARNED GREAT IT’S UNBELIEVABLE. That’s how great it is. Just a light among the nations.

So, naturally, they hate us, too.

Then a 12 step meeting. The less said about these, the better, except that they save lives every hour of every day.

A swift drive to our club, Morningside, for dinner. Outside was a friend’s spectacular white 1955 Thunderbird, totally restored with aqua leather interior. It made my head spin. Not counting my former 1962 Red Corvette, it’s the best looking car ever. How I miss my Corvette. So much torque it could “lay rubber” shifting from 3rd to 4th at over 100 miles per hour on the 2 AM deserted Dulles access highway. (Passed up by a 6.3 liter Mercedes sedan. That was in 1972, when I was thin and hip.) 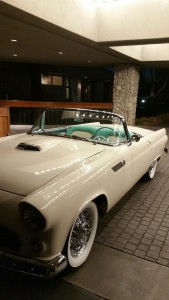 The Morningside clubhouse will be closing for the summer soon. Breaks my heart. I have come to think of it as the purring engine of my life. The velvety cover of the chromed V-8 of my life. It has the best food ever, perfect waiters and captains, a stupefyingly great view of the green gold course by day and the stars and airplanes by night.

Morningside, I will miss you after a few more weeks. I hope I live to spend another season there. My wife and I quarreled at dinner because I kept telling and retelling about the horrors of World War I. She’s sick of hearing about it. But… the gratitude that I have never had to live that way buoys me up and humbles me at the same time.

However, if she doesn’t want to hear about it anymore, that is her right.

My grandfather, David Stein, was in the U.S. Cavalry fighting the Aguinaldo Insurrection in the Philippines before World War I, I think. I really have to find out more about that conflict. It must have been a nightmare being in the jungle on a mule with the rebels trying to cut your head off. He was a brave guy. I wish I knew much more about him.

Now, to swim under the stars and the contrails behind the palms.

My wife is asleep so I will just tell you that at the Somme, 19,000 British young men, the flower of the youth of Britain, were killed in one day, for no gain whatsoever. The British commander responded by sending in twice as many men the next day — with worse results. This went on for more than four years.

There are no words to express how grateful I am not to have been there.