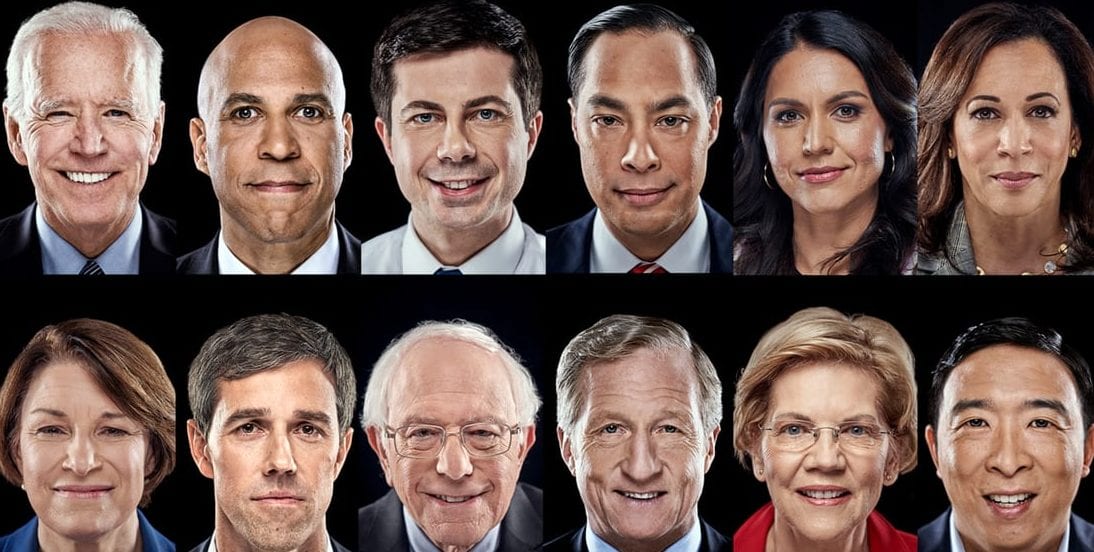 My goodness, these people are boring. What a snoozefest. What was most interesting, though, is what wasn’t talked about.

Here’s some overall impressions, and then I’ll get into the candidates themselves.

First, this crew has driven past Bernie (the Squad endorsed him!!!) and gone off into the weeds and rusting buildings of commieland. Trillions of spending was waved off as no big deal. Gun confiscation was enthusiastically embraced. The Democrats are now the party of perpetual war and foreign adventurism, but there was zero mention of one Barack H. Obama. Also notably absent: Code Pink. Where are those ardent, true believers screaming out, “BUSH McHALLIBURTON!!!”?

Second, let’s be honest, though. Who really was paying attention to their insanely extreme domestic and foreign policy plans? Mostly, they were boring. Leaden, even. Nothing quotable. Nothing interesting. This is in stark contrast to the Republicans in 2016. That field was strong. Nearly anyone on that stage could be president and America would be fine. Forget who they were? Let’s just look at the candidates who withdrew before the primary: Rick Perry (governor, Texas — economic miracle), Scott Walker (governor, Wisconsin — economic turnaround), Bobby Jindal (governor, Louisiana — growth), Lindsey Graham (senator, South Carolina — Years of experience, foreign policy and judicial expert), George Pataki (Yuck, but governor, New York.) Any of them could lead the nation better than the doofuses on the stage as the premiere Democrats. President Obama decimated the party for a generation. Not only did Democrats across the country get destroyed but the bench to build future leaders also sat empty. Hopefully, the Republicans are watching and learning. Just kidding. They never learn. Anyway, the lack on the Democrat side is so complete and sad, it’s a little unnerving. None of these people deserve to lead this nation. Let’s discuss why, one by one.

Joe Biden: (17 minutes) He’s still the leader, no matter what the polling says. He’s stumbling, fumbling, addled, and old. If he loses, I will blame his ill-fitting teeth. They seem to get in the way of his speaking when his brain can form a thought. But Joe is likable. He wasn’t pressed about corruption or his dopey, grifter kid. He is a Democrat after all. What a weak mess for a party leader.

Elizabeth Warren: (23 minutes, oh the media LOVES her) Does this woman have tardive dyskinesia? What the hell? All her weird, jerky movements, twitches. She’s like the crazy grandma. (Hillary was the mean grandma.) Warren, underneath her superior lecturing to dumb college students (you) is just statist, authoritarian (what college prof can handle being questioned these days?), and boring. She is even weaker than Biden, and that takes some doing. I’ll say this: her makeup looked good and she’s bright on the stage compared to the walking dead around her, but bright in that wide-eyed, you’re-freaking-me-out true-believer kinda way.

Bernie: (13 minutes) Oh, where to begin. So, he said some nice things to his followers. It was the first time I’ve seen him be so genuine, and it was heartwarming. Normally, it’s angry Bernie all the time. Bernie should be happy. Every wackadoodle on the stage got 100 percent of their ideas from his USSR-loving communist plans. Commie is mainstream because of Bernie. But he’s not going to win ever. He will be a spoiler again to the womyn, especially Liz Warren.

This is where things get weird. There are these ancient people who are the front-runners. It’s difficult to imagine any of them keeping up with Trump. Warren will schoolmarm him to death. Bernie and Biden will just poop out. Beyond them, the field is wide open. Let’s go with whom the media seems to love most. I’m going to spoil the end and tell you who they hate most, and that’s Tulsi Gabbard, which I’ll explain in a minute. She’s hated by the neocons on the right, too. Back to the miserable middle.

Kamala Harris: (12 minutes) Said, “I’m done.” She was referring to something Very Important Just Ask Her and You Know It’s Important Because She’s Using Her Serious Voice. But the bottom line is that she’s done. She went on some weird tangent wanting Elizabeth Warren to say that she wants President Trump off Twitter. This idea makes the media and Never Trump-ers tingly, but all it sounds like to other people is that she can’t take the heat and should get out of the kitchen. This debate demonstrated just how over she is.

Cory Booker: (11 minutes plus) Sigh. He and his bug eyes need to go. No, you’re not even going to be vice president. Did you know that he’s a vegan? Next.

Pete Buttigieg: (13 minutes) He can be saying something sensible one minute and then sound insane the next. If I had to diagnose a psychopath on the stage (beyond the normal sociopathy of all political candidates), it’d be him. I don’t know what his deal is, but when he looks at the camera it freaks me the heck out. Dude is weird. As I’ve said before, no one with his name is going to be elected. Mayor Pete is going back to Indiana and will be forgotten.

Amy Klobuchar: (13 minutes) Now here’s the thing about Ms. K: she’s awkward and not very likable but was talking intermittent sense on the stage tonight. I can’t remember what about. Again, everything melted into boredom. Wait, I remember. From her 10 years in the private sector, she remembers capitalism being a good thing but big business still needed to be taxed. Oh right. Never mind.

Andrew Yang: (8 1/2 minutes) Mr. Yang had his moments. He’s actually likable by normal people, which is why the rest of the candidates and the CNN hosts seem to dislike him. He got a little dig in on the Bing search engine, which made people laugh, which woke them up out of their somnolent stupor. Then they went back to sleep again. Everyone dismisses him. He won’t get traction.

I completely forgot about Beto O’Rourke and he got 13 whole minutes to blather. He’s such a dope. As the debates go on, it’s obvious how much of an amateur he is. His perpetual pout makes one want to smack him. Like Abortion Barbie before him, I don’t know how he gets elected in Texas ever again at any level, never mind become president.

And then we get to Tulsi Gabbard, the woman who receives universal Beltway and media derision but who most normal Americans will like because she’s not insane. She is smart, firm, never wavers in her answers and has the calm assurance of someone who’s been in tougher situations than a stupid debate stage. She held firm on a nuanced abortion position (no late-term abortion, abortion should be legal at the beginning, abortion is a tough choice for a woman). She defended getting troops out of the Middle East. The scorn she receives from the media and Twitter mystifies me. Do these folks not understand where Americans are at right now? I saw someone chortling about her use of the term “regime change,” but, uh, that’s been the American position from Bush I, Clinton, Bush, Bush, Obama, Obama. Trump is trying to undo it. Obama was going for regime change in Syria. Hillary had her regime change moment in Libya. They attempted it in Egypt. Bush changed the Iraq regime. It’s constant meddling. Tulsi bringing it up is like the skunk in the garden party, apparently. Americans are sick of it. She’s on the side of voters, not the Beltway buffoons.

What really ticked the moderators off, though, was when Gabbard called out the New York Times and CNN for calling her a Russian stooge. She was outraged. They cut her off and went to commercial.

If the Democrat primary was normal, Andrew Yang and Tulsi Gabbard would be doing better. But it’s not and primary voters are old and the ones who aren’t old are voting for Bernie.

I remain convinced that Biden has the best chance against Trump. CNN wants Warren, and badly. The media keep getting their preferred candidates. They got Trump. Maybe they’ll succeed with Warren, too.

All in all, a wasted evening. These candidates absolutely stink. It was boring, filled with evasion on taxes and authoritarian impulses across the board. If the Americans watching it didn’t fall asleep during it, the tyrannical ideas should frighten them.

Melissa Mackenzie
Follow Their Stories:
View More
Melissa Mackenzie is Publisher of The American Spectator. Melissa commentates for the BBC and has appeared on Fox. Her work has been featured at The Guardian, PJ Media, and was a front page contributor to RedState. Melissa commutes from Houston, Texas to Alexandria, VA. She lives in Houston with her two sons, one daughter, and two diva rescue cats. You can follow Ms. Mackenzie on Twitter: @MelissaTweets.
Most Popular
1
Special Report
What in the Hell Is the Penn Biden Center?
by Paul Kengor