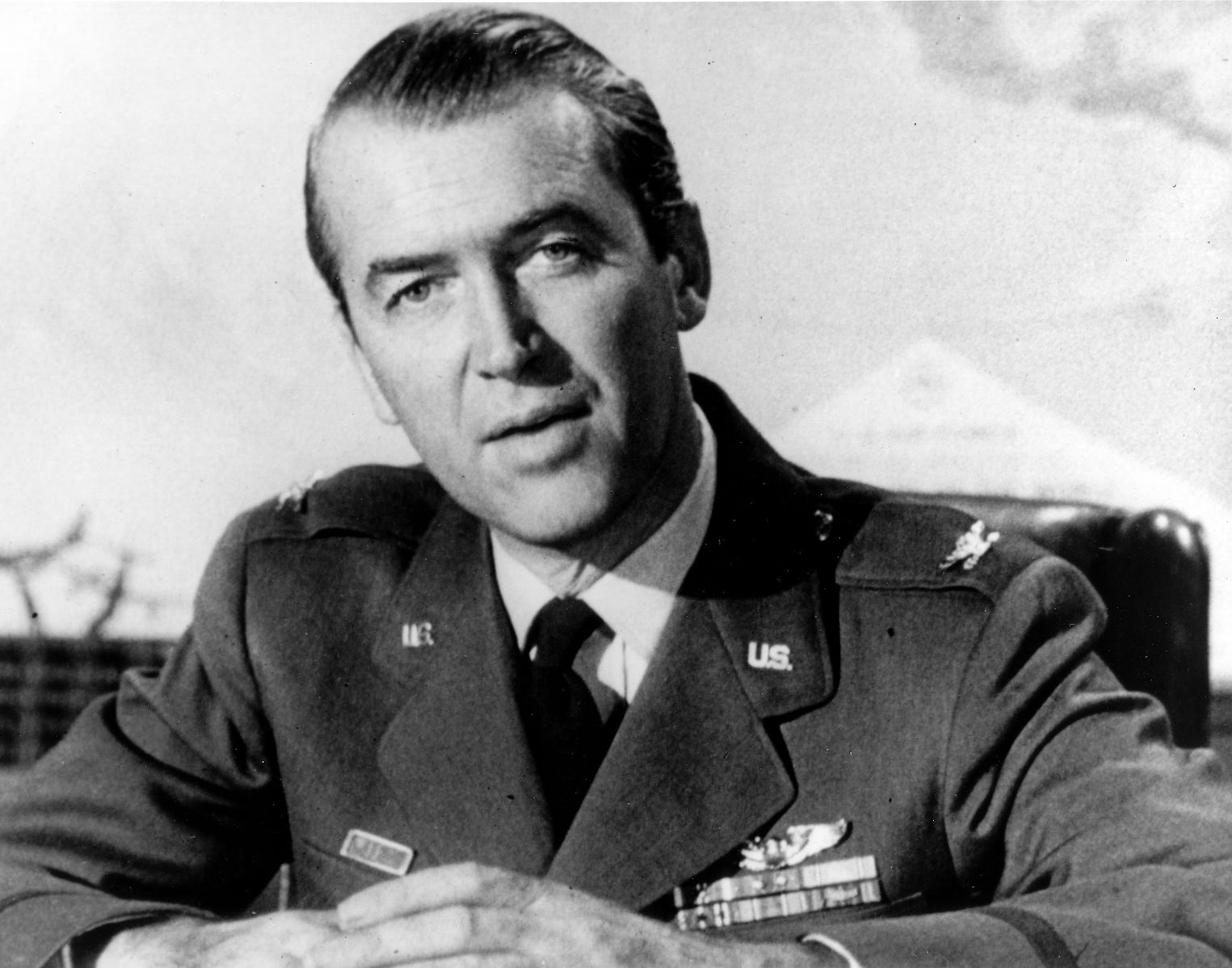 Indiana, Pennsylvania — This magazine in the past few weeks has paid homage to Frank Capra’s Christmas classic, It’s a Wonderful Life, starring the great Jimmy Stewart. I’ve seen the movie plenty of times. So why did it leave me crying again this year?

Yet it did, from the moment a desperate George Bailey cried out to his shop-worn guardian angel that he wanted to live again, all the way through “Auld Lang Syne.” Stirred by that experience and curious as to what prompted it, I decided to do something I had wanted to do for years. I made the trip to the Jimmy Stewart Museum in the small central Pennsylvania town he grew up in — Indiana, Pennsylvania.

Jimmy Stewart was an unpretentious guy who only consented to this museum — which opened in 1995, just a couple of years before his death — if it would be of like character and financially benefit his hometown. Occupying a small third floor of the Indiana Free Library with five exhibit rooms, a little theater, and a tiny gift shop, it is certainly modest. The museum walks you from his boyhood bedroom to his family hardware store and other mainstays of his youth, to his distinguished military service, spectacular acting career, California home, and personal office. The museum is superb, mainly because it faithfully distills the life and essence of a remarkable man who exemplified the basic character, commitments, and bedrock values of someone who was a lot like the fictional George Bailey. This is a life that Americans in this cynical, relativistic, angry, confused, deeply divided era would do well to contemplate.

First, there was faith and family. Like George, Jimmy adored and emulated his small-town father, a Presbyterian hardware store owner serious about his faith and dedicated to caring for his wife and family. When Jimmy won his first Academy Award in 1941, his father the next day telephoned to ask him to send it home for his display window. That is where it sat for years. When Jimmy went to war shortly after this, serving often harrowing duty under heavy fire as a World War II bomber pilot flying out of England, like so many others, the Stewart family of Indiana hung the Blue Star Service Flag outside its home. Like George’s brother Harry in the film, Jimmy returned to his hometown as a decorated war hero aviator. A famous picture shows him then, kicked back with his feet on the counter next to the cash register, talking on the phone as his dad attended a line of customers. Like his dad, Jimmy was a churchgoer and dedicated Presbyterian, a one-woman husband to his wife of 45 years, Gloria, adopting her two sons then having twin girls, all of whom he doted on and protected from the degenerating forces of Hollywood. As his daughter Kelly said in an interview, “Dad” kept “showbiz” out of their home. And his wife and children loved him in return.

Second, there was duty and self-sacrifice not only for family, but also community and country, exemplified in many ways, but perhaps most in his military service. His father served in both the Spanish-American and first World War, and both grandfathers served in the Civil War. Like his forebearers and the Baileys, Jimmy was not a shirker. He not only faced the ordeals and death of World War II with no celebrity favors, but did so knowing that, even if he survived intact, his successful film career might never get back on track. In fact, he had back-up plans before Frank Capra signed him up for the now-famous 1946 film project.

Like George Bailey, Jimmy was willing to set aside what he wanted, permanently if it came to that, in order to do what duty required. Like George, Jimmy’s sacrifices led to enduring loss and pain. He saw comrades die, his plane hit by shells, lived with the guilt he felt because he knew German civilians were dead from bombs his plane dropped. He suffered from what we would now call PTSD. But like George, his trials made him deeper, stronger, wiser and also opened him up to real anger, even rage. Most film critics acknowledge that Jimmy Stewart’s war experience added depth and complexity, even dark undertones, to his acting that would have never been possible had he not endured heavy combat. But his wife and family also remembered him suffering nightmares even years later.

Like George, Jimmy stuck to his commitments. A Boy Scout as a youth, he remained dedicated to that organization his whole life. Despite his awful experiences in World War II, he remained in the military, retiring in 1968 as Air Force Reserve Brigadier General. In fact, he even went on a secret mission to Vietnam in 1966 which included joining a crew on a bombing mission that almost ended in disaster when the plane’s flaps malfunctioned, and they were forced to crash land. When his oldest son Ronald was killed as a Marine in Vietnam in 1969, despite his sorrow, Jimmy stood by his support for both the military and that particular conflict, never accepting the idea that his son’s death was wasted.

Finally, there was fundamental human decency. Jimmy was known for modesty, graciousness, and warmth, even as he could be stubborn and unyielding when his convictions were on the line, just like George Bailey. He epitomized the man that the fallen Violet Bick was so glad she knew because of how he cared about others without drawing attention to himself. Stewart’s basic decency is noted over and over in interviews with people he dealt with from every level, persuasion and walk of life.

Perhaps most telling with regard to these qualities was Stewart’s lifelong, close friendship with Henry Fonda, one that went back to rooming together as starving actors in New York City in the early 1930s. Stewart was a conservative Republican and Christian, and not afraid to show it, Hollywood or not. Fonda was an agnostic, raised Christian Scientist, and a liberal Democrat. Friendships between someone like Jimmy and John Wayne or Ronald Reagan we understand, but Fonda? Their approaches to marriage (Fonda had five) and family (Fonda’s relationship with his children was, well, complicated) were miles apart. Yet they loved and respected each other, choosing to focus on all they shared while agreeing to disagree, and generally not discuss, their differences. They would get together to build model airplanes and talk. It was a remarkable friendship, captured well in the recent book, Hank and Jim.

Decency, duty, family, community, hard work, honesty. Simple things which, as Stewart said, were blessings within the grasp of anyone, high or low, rich or poor, who chose to embrace them. And now I understood where my tears came from, watching the climax of that marvelous film for the umpteenth time.

Whether in everyday life, mass or social media, George Bailey and Jimmy Stewart and all they represent stand in sharp contrast to the coarseness, animosity, profaneness, and hostility of our rapidly degenerating modern American culture. At Stewart’s museum in little Indiana, Pennsylvania this Christmas season, I realized how tired and discouraged I was from the latter, and the desperate depth of my longing for the goodness of men like Stewart and Bailey to be held in honor again, not just by everyman, but by those who teach and lead us.

Whether it’s Woke cancel culture or “owning the Libs,” we have come unhinged across the social and political spectrum. We need to bring back fundamental bedrock values, moral goodness, and interpersonal decency. The simple moral example of folk like Jimmy Stewart, and the mythical inspiration of films he starred in such as It’s a Wonderful Life, can help to heal us, if we heed what they teach, and are not ashamed of them despite the scorn of today’s intellectuals, media influencers, and pundits. Let us do just that, before it’s too late.

Maybe starting with another viewing of that film, and a lingering visit to the Jimmy Stewart Museum.

Dr. David Ayers is former dean of the Calderwood School of Arts and Letters at Grove City College, where he is currently a professor of sociology in the Department of Economics & Sociology, and a fellow at the college’s Institute for Faith & Freedom. Ayers’ latest book is After the Revolution: Sex and the Single Evangelical. He is also author of Christian Marriage: A Comprehensive Introduction