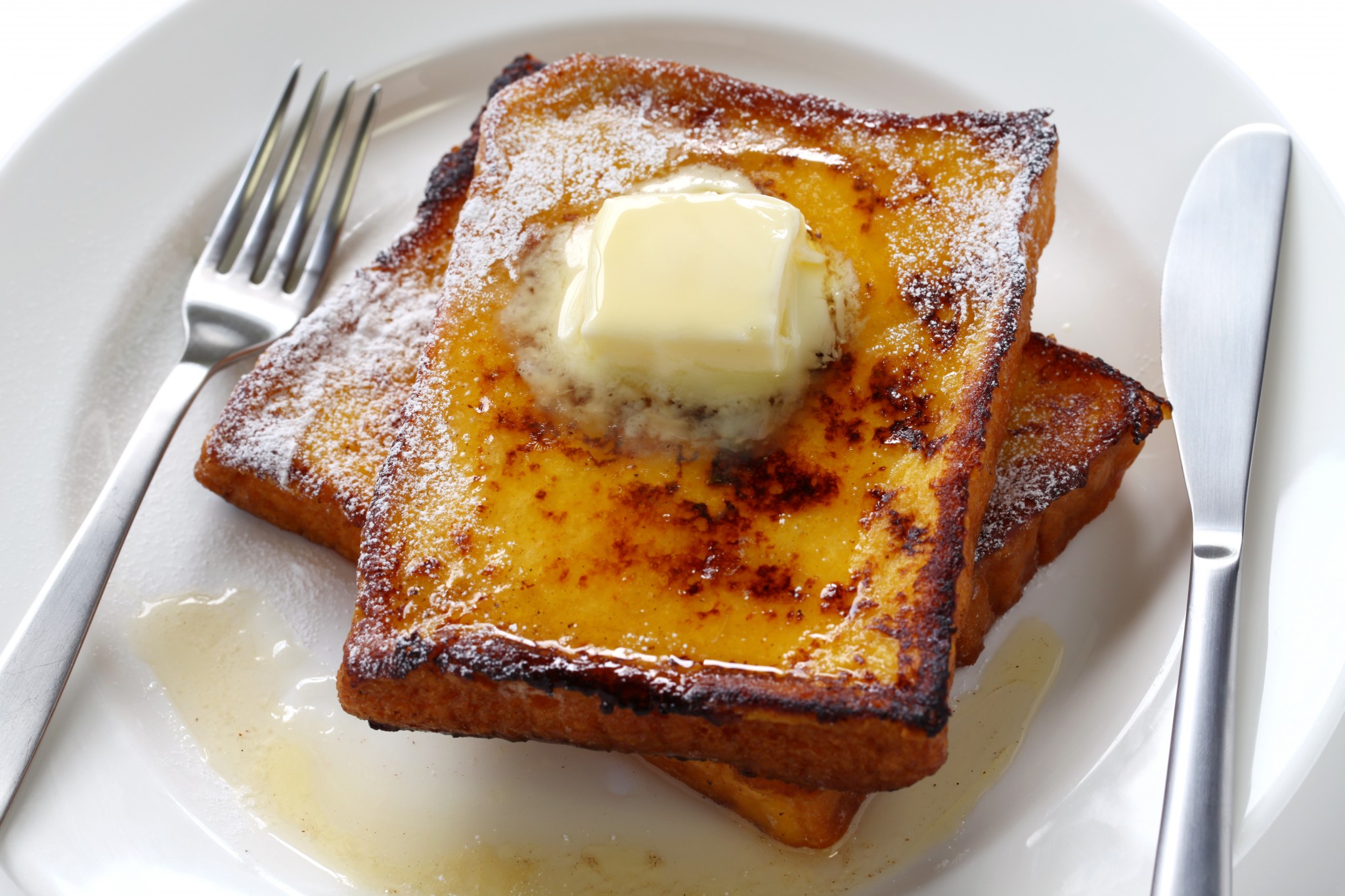 The day after the night from hell. Last night, as always, I made dinner for my wife and my caregiver, a super smart Filipino named Glenn. My wife said as I was heading for the kitchen that she was too tired to eat dinner. But she says that every night and every night she eats what I make. It’s almost always prime ribeye, filet of salmon, or French toast. Last night, by consensus, it was French toast.

I have a special recipe. First, I get my pal Bob Noah, who lives in Washington, D.C., to buy and send me Pepperidge Farm white bread. Pepperidge Farm is, by my reckoning, by far the best bread I have ever tasted. It is rich and solid. For some reason, it’s not sold in California. I have no idea why. But it is the bread of my childhood in Silver Spring, so I still love it.

I put three eggs into a bowl, add about half a cup of half and half, then add a few shakes of vanilla, and then many sprinkles of cinnamon.

I stir these up to a medium thick consistency. Then I heat two pans with Pam (a great invention), then add a good slice of butter, then maybe four tablespoons of olive oil.

I heat it at a low flame until it starts to sizzle. Then I quickly dip one slice of bread in the batter for maybe ten seconds on each side. Then I slide them lovingly onto the surface of the pan until I have enough for everyone.

I let them fry for maybe 90 seconds on each side or until they have some brown edge. Then I take them off and put them on the plates of each diner. My wife gets three slices and Glenn and I each get four. My wife gets butter but no syrup. Glenn (my caregiver) and I get butter between each slice and Log Cabin maple syrup.

The result is spectacularly delicious. My wife eats every time even though she always says she won’t have any dinner.

We always eat with great enthusiasm. Then Glenn takes away the dishes and Alex and I settle in to watch DVDs of ancient Perry Mason episodes. Alex and I love Perry Mason from our childhoods. It’s a great show, with intricate plots, and spectacular acting by Raymond Burr as Perry, and my favorite actress, Barbara Hale, as his staggeringly beautiful secretary, Della Street, William Hopper as Paul Drake, and then there is my favorite male actor on the planet, Ray Collins, who plays Perry’s would be (never successful) nemesis, chief of homicide, Lieutenant Tragg. He turns out to have been about as successful an actor as there has ever been. He was in hundreds of stage shows and thousands of radio dramas. He has an ingratiating, mocking, and somehow threatening and also lovable persona. He had a huge part as a bad/good guy in Citizen Kane. I love him to pieces.

He became disabled because of cancer three years into the show and the producers and other cast loved him so much they kept his name in the credits until he died. Everyone on the show is always smoking. I also love Bill Talman as bumbling DA Hamilton Burger. It was made in the 1950s. That tells us a lot.

I fell asleep holding my wife’s hand and she awakened me at midnight for us to say our prayers and then to walk her to her room and put her to bed.

By then, my night nurse, Ceazar, also a super smart Filipino, was on duty. I lay down for a short rest and did not wake up until three a.m. I had to rouse myself, take my huge quantum of fiber pills, and then shower and go back to sleep.

I am extremely scared.

I had a full day at the incredibly expensive optometrist, then a TV interview about Reaganomics, and then a long article about the insanity of Biden’s energy policies, guaranteed to wreck the nation.

Time to go back to tonight’s French toast and Lt. Tragg. And my glorious wife.