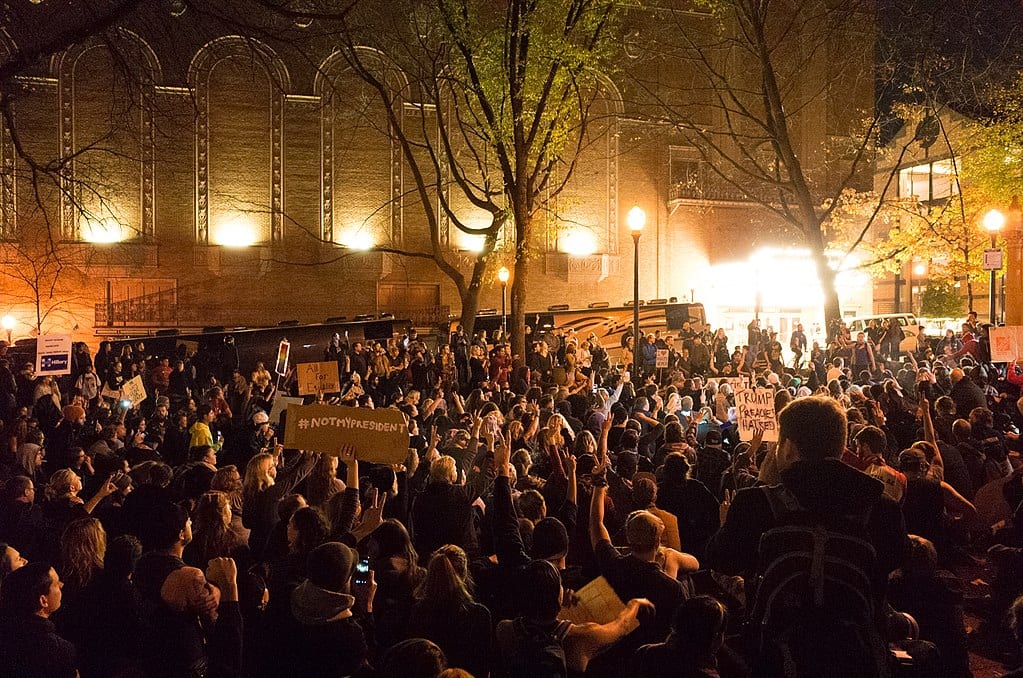 Portland, Oregon, is a deep-blue city in a deep-blue state — in 2016, Hillary Clinton got 73% of the vote in Multnomah County, carrying Oregon by an 11-point margin — and therefore would seem to be an unlikely place to find anti-LGBT violence. So when activists in Portland claimed they had been the targets of hate crimes in February, Andy Ngo was skeptical. A transgender activist’s claim to have been attacked by assailants wielding a baseball bat? Portland’s anti-bias crime unit dropped the investigation for lack of evidence. When “a self-described fat-queer activist” claimed on Facebook that her girlfriend “was attacked by ‘two young white men’ in a maroon SUV”? Portland police don’t even have a record of a report for such an incident, according to Ngo. The good news, then, is that Portland’s LGBT community has no reason to fear they’re being targeted by an epidemic of hate crimes, but the bad news is, some activists are apparently willing to invent such incidents to support the Left’s narrative that President Trump’s election has unleashed the forces of “hate.”

In the wake of Jussie Smollett’s hoax in Chicago — another deep-blue stronghold where Trump-inspired violence would seem unlikely — Americans are increasingly suspicious toward similar claims. More and more high-profile incidents of “hate” are being revealed as hoaxes. In Mississippi last week, a member of a black church pleaded guilty to arson, setting fire to Hopewell Missionary Church and spray-painting “Vote Trump” a week before the 2016 election. As Wall Street Journal contributor Jeryl Bier noted, that hoax was the lead item in a Southern Poverty Law Center report that blamed Trump for “a national outbreak of hate.” Not only was the Mississippi church arson a hoax, Bier pointed out, but at least three other incidents featured in the SPLC report were also either faked or misreported. One of those involved “Heil Trump” being spray-painted on an “inclusive” Episcopal church in Indiana; a 26-year-old gay man eventually confessed to perpetrating that hoax, but not before it was widely cited as evidence of Republican-inspired “hate.”

Such hoaxes are self-evidently intended for political propaganda purposes. The gay man who vandalized the Indiana church, for example, explained that he wanted to “mobilize a movement” and “give local people a reason to fight for good.” This motive has long been a factor in the hate-hoax phenomenon on college and university campuses, as Michelle Malkin has observed regarding her own alma mater, Oberlin College, where it is now more or less routine for left-wing students to “mobilize a movement” with bogus hate incidents. After the Smollett hoax, in which the Empire actor claimed his white assailants had put a noose around his neck, Malkin was able to cite seven separate incidents in which nooses were part of false hate-crime claims. Yet the so-called “mainstream” media acted as willing accomplices to Smollett’s hoax, as if there was no reason to be suspicious of the idea that two white Trump supporters would be stalking an actor in downtown Chicago at 3 a.m. After the Cook County prosecutor dropped charges against Smollett, enraging even Democrats in Chicago, Carl Cannon of Real Clear Politics commented:

Although it’s a story line that only the conservative media seem to be following, it turns out that racial hoaxes are disturbingly commonplace in this country. Worse, the mainstream media often stokes them, or in some cases, takes the lead in pushing them. Their very frequency suggests a couple of disquieting deductions: First, in our victimhood culture the demand for such outrages may now exceed the supply. Second, it turned out that Jussie Smollett may have understood the political zeitgeist far better than those outraged by his scam.

After the January incident in which Covington Catholic students were falsely accused of hateful behavior, I remarked that the liberal media’s appetite for proof of Trump-inspired racism had “summoned into existence a Hate-Hoax Industrial Complex” to manufacture bogus evidence. Now, however, one of the biggest factories in the fake-hate industry is experiencing a crisis. The Southern Poverty Law Center has lost three of its top officials — co-founder Morris Dees, longtime president Richard Cohen, and legal director Rhonda Brownstein — amid scandalous accusations of sexual harassment, discrimination and, yes, even racism. The SPLC’s meltdown has become such a public spectacle that, as Tyler O’Neil of PJ Media notes, even CNN could no longer ignore the story.

The stench from this scandal was enough to provoke a blistering denunciation of the SPLC’s modus operandi from progressive journalist Nathan J. Robinson, who condemned the group’s annual hate-map as “an outright fraud.” Robinson called attention to a problem that has long been noted by such of the SPLC’s critics as Laird Wilcox, namely that the dots-on-the-map motif of documenting hate-group activity doesn’t provide any real indicator of how prevalent or dangerous such activity really is:

The SPLC consistently declines to identify how many members these hate groups have. It just notes the number of groups. Without knowing how large they are, what does it mean that they exist?… In fact, when you actually look at the hate map, you find something interesting: Many of these “groups” barely seem to exist at all.

Indeed, as I recently pointed out (“Another Dot on the ‘Hate Map,’” Feb. 27) the SPLC seems to have engaged in wanton exaggeration to foster the impression that the number of hate groups is now at an all-time high. Any journalist could click the dots on the SPLC’s map and discover, for example, that the number of “Anti-Muslim Hate Groups” was padded by including 47 separate listings for local affiliates of Brigitte Gabriel’s Act for America. Of course, Gabriel and many other conservatives targeted by the SPLC deny that they are advocates of “hate,” but such definitional arguments are really irrelevant to what Robinson calls the “scam” of the SPLC’s dots-on-a-map trick. While liberals might condemn as “hate” sentiments that a conservative would call patriotism or Christianity, the real question is whether the dots on the SPLC’s map represent a threat of criminal violence. Some of the alleged “hate groups” identified by the SPLC are simply websites run by fundamentalist Christians who express disapproval of homosexuality, but even if you disagree with their theology, does this justify lumping such people in with neo-Nazi groups with established histories of violence against Jews or racial minorities? And as Robinson points out, some of the allegedly scary neo-Nazi types listed by the SPLC (e.g., the Odin-worshipping “Asatru Folk Assembly,” with 17 dots on the hate-map) are more pathetic than they are frightening.

These “Asatru” devotees of Norse mythology are one of the 15 hate groups operating in Oregon, according to the SPLC, so maybe they would be suspects in the anti-LGBT hate-crime trend in Portland, if such a trend actually existed. Andy Ngo doesn’t exactly accuse anyone of committing a hoax, but he’s clearly skeptical of the idea that gay people in Portland are besieged by right-wing thuggery. Ngo says a “moral panic” has been incited by Portland’s progressives, including journalists reporting unsubstantiated accounts of “anti-queer violence” from anonymous “survivors.” For daring to question the hate-crime epidemic narrative, Ngo has been labeled a “fascist,” “transphobe,” etc. Determined to promote the paranoid belief that “hate” is everywhere in the Trump age, progressives now attack anyone who reports the good news that it’s not. The Left considers skepticism proof of hate, and demands instead a quasi-religious faith. To the Left, the fact that Trump is president means the hate must be real, even if they have to fake the “evidence” to prove it.