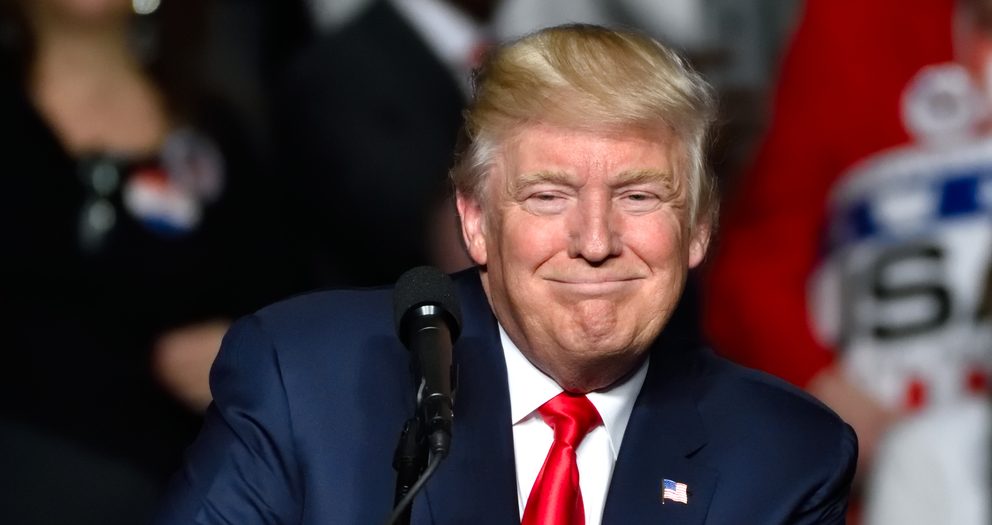 Sunday afternoon, the Trump campaign put out a press release containing bullet points of the second-term agenda he’ll run on. It feels like it’s late in the game for him to do that, perhaps, but on the other hand this week is the opening of the Republican convention — so sure, the timing for the agenda makes sense.

It’s been said repeatedly that Trump can’t just wait around for Joe Biden to implode — though the chances aren’t terrible that Biden will do just that, given his 100 percent propensity to vaporize as a presidential candidate in the past and his current suspect capacity with respect to what’s inside his cranium. Trump needs something to run on beyond funny tweets and the fact he’s neither Antifa nor Bill de Blasio. Americans don’t want to vote for the Hard Left despite what the legacy media might have you believe, and it’s pretty clear they don’t really want to vote for Biden either. But given that Biden’s entire pitch is that he isn’t Trump — the Democrats’ agenda is so out of touch with the American people they’re denying a lot of it even exists, as evidenced by their constant insistence that “redirecting” funds from police is not the same as “defunding” the police — having something people would like to see happen in the next four years is the best way for Trump to win over voters who aren’t as amused as the rest of us are by his style.

The agenda is entitled “Fighting for You!” and the campaign describes it thusly:

President Trump’s boundless optimism and certainty in America’s greatness is reflected in his second-term goals and stands in stark contrast to the gloomy vision of America projected by Joe Biden and Democrats.

What’s noticeable about it is that Trump’s agenda isn’t really all that ideological. It’s more like a performance agenda, which talks about things people on the center-right would like to see.

For example, under “JOBS,” Trump says he wants to create 10 million new jobs in the first 10 months of his second term, which is fairly robust, but it’s really just a question of getting the country over the recession caused by the COVID-19 shutdowns. It’s probably jazzier to throw out a number than to dredge up the virus again. He also says he wants to create a million small businesses. The “JOBS” section talks about cutting taxes to boost take-home pay, which probably means payroll tax cuts, and it talks about fair trade and “Made in America” tax cuts. Opportunity zones return in the agenda, and Trump also throws in a line about deregulation, particularly with respect to energy — which is obviously a bright-line difference from the nutty Green New Deal narrative the Biden camp is spinning. Watch for Trump to hammer away at Biden’s envirolunacy in Ohio and Pennsylvania with that contrast.

COVID-19 is, of course, on the agenda, and it seems pretty clear that Trump will be as bold in touting his administration’s record on the virus as the Democrats are in trashing it. Nevertheless, the agenda talks about developing a vaccine by the end of 2020, which would be even before his second term begins, and promises a “Return to Normal in 2021,” which sets up another interesting contrast. Biden has made a nationwide indoor/outdoor mask mandate a front-and-center campaign item, so Trump talking about normalcy will set him up as the Anti-Karen candidate. There is some risk to that given how hysterical so much of the populace is and what the media will do to the idea of “normal” being on the table in this election. The agenda also talks about domestic production of pharmaceuticals and medical supplies, and about refilling stockpiles — something Team Trump will no doubt continuously ding Biden for botching when it was his job to manage that problem as vice president in the previous administration.

There’s a section on ending America’s reliance on China, something that needed to be in the agenda given that Trump will surely make Biden’s cozy/corrupt relationship with the Chinese Communist Party a key issue in the campaign. Team Trump has a line in this section about holding China fully accountable for allowing COVID-19 to spread globally, and there is another line promising to ban companies outsourcing to China from getting federal contracts. The agenda promises to bring a million manufacturing jobs back from China, and to do that it talks about offering tax credits to companies who do just that, plus it also promises to allow 100 percent expensing deductions for, as examples, pharmaceutical and robotics companies who repatriate their production here. A policy focus on competing with China ties in well with the statements Secretary of State Mike Pompeo has made about the relationship and its direction. It’s clear Trump has a whole lot more to offer than Biden on China, and this ought to be the central focus of the campaign.

There’s a section on health care, most of it containing things Trump has already talked about or worked on. It discusses cutting prescription drug prices, something Trump addressed recently, and offers some fairly non-ideological promises like protecting our veterans’ health care and protecting Medicare and Social Security, plus offering to cover all preexisting conditions (though it doesn’t say how), ending surprise billing, lowering health insurance premiums and putting doctors and patients back in charge of the health-care system. The less specifics here the better, because all that’s really required for Trump to at least hold the line on health care is to accuse the Democrats of trying to give us a worse version of Britain’s National Health Service, and simply tell horror stories about Post Office–quality health care on the way if Biden wins.

There are only two items in the education section: giving school choice to every kid in America and teaching American exceptionalism. It would have been more fun if Trump had talked about helping to build out resources for homeschoolers, and encouraging the growth of small business’s role in American education through things like micro-schools and homeschool pods, but maybe those things aren’t quite popular enough to run on just yet. It’s probably easier to simply run against the teachers’ unions at this point, seeing as though they’re determined to cut their own throats with the public.

There’s a “DRAIN THE SWAMP” section, which talks about congressional term limits, taking on international organizations that hurt Americans “exposing Washington’s money trail,” which sounds interesting, and ending bureaucratic bullying of citizens and small businesses. This ought to be a nice contrast with the Biden camp, which doesn’t seem to have a problem with anything Washington does.

The “DEFEND OUR POLICE” section is pretty much what you’d expect. It talks about fully funding police departments and putting more cops on the street, which was an old Bill Clinton promise. It has a line about increasing criminal penalties for assaults on law enforcement officers, which sounds like it would clear all the Antifa goons off the streets, and it specifically talks about bringing Antifa to justice. There’s a line about prosecuting drive-by shootings as acts of domestic terrorism, which seems like red meat for the police unions but might be aimed at attracting support from folks in the black community tired of the lawlessness in the inner cities. Another big contrast with Team Biden: the Trump agenda has a line that says “end cashless bail and keep dangerous criminals locked up until trial.”

The agenda’s immigration section contains a promise to “protect American workers” in its headline, which is a return to a formulation that worked for Trump in 2016. It talks about blocking illegal immigrants from getting welfare, free health care, and free college tuition, mandatory deportation for non-citizen gang members, and dismantling human trafficking networks. In another shot at urban Democrat machines it talks about ending sanctuary cities. There’s a line about prohibiting American companies from replacing citizen employees with lower-cost foreign workers, which is a bit of an eye-opener in that 10 years ago you would have never expected something like that in a GOP platform, and a line about requiring new immigrants to be able to support themselves financially — which is an old idea we got away from a long time ago. It’ll undoubtedly be called “racist,” but Trump is going to get more bouquets than brickbats from the voters from it.

There’s an “INNOVATE FOR THE FUTURE” section, which talks about launching the Space Force, establishing a permanent manned presence on the moon and sending the first manned mission to Mars. There’s a line about building the “world’s greatest infrastructure system,” which sounds like classic Trump. The section talks about winning the race to 5G, it promises clean water and air, and it talks about partnering with other nations to clean up the oceans. One wonders whether Trump will uncork at some point a broadside against China for being the world’s No. 1 dumper of plastic into the Pacific.

And finally, the foreign policy section is branded “America First,” as you would expect from Trump. It talks about a lot of tried-and-true items from Trump’s first term — stopping “endless wars” and bringing home American troops, getting allies like NATO members to pay their fair share, maintaining the military, killing terrorists, and building up our cybersecurity and missile defenses.

There isn’t a lot in here that looks like a political risk. It’s all typical Trump stuff, and it would be reasonable to call it more populist than conservative. But what it does is to reestablish Trump as an agent of change, something the public wants out of its president, without making him a wild-eyed radical.

This agenda comes off as a full-speed run to the center, but without completely shunning the conservative base. There is nothing in Trump’s agenda about fiscal conservatism or bringing down our monstrous deficit, but of course Trump doesn’t have to run on that given who his opponent is. Also absent is a discussion of “protecting the suburbs,” which might be a missed opportunity given Biden’s embrace of radical housing and zoning policies aimed at spreading the ghetto out of the inner cities, which ought to be electoral poison.

I’ve noted this before, but this feels a lot like a reprise of Richard Nixon’s successful 1968 campaign. It’s a law-and-order message in a time of political chaos, and it’s an open appeal to middle-class people of color who bristle at the idea they’re obligated to endorse the radical politics of the street.

Properly articulated, this agenda could pull a political landslide and even grow some coattails. But Trump is going to want to resist the temptation to dunk on Biden in every news cycle, because an agenda like this can speak for itself and win.

Scott McKay
Follow Their Stories:
View More
Scott McKay is publisher of the Hayride, which offers news and commentary on Louisiana and national politics. He’s also a novelist — check out his first book “Animus: A Tale of Ardenia,” available in Kindle and paperback.
Most Popular
1
Another Perspective
I Stand With Trump
by Jeffrey Lord

Wednesday will mark the four-year anniversary of the violent Antifa...Read More

5
The Nation’s Pulse
The Political Theater of the National Guard’s D.C. Occupation
by Nic Rowan

6
Hither and Yon
Big Tech v. America: How to Fight Back and Win
by Scott McKay