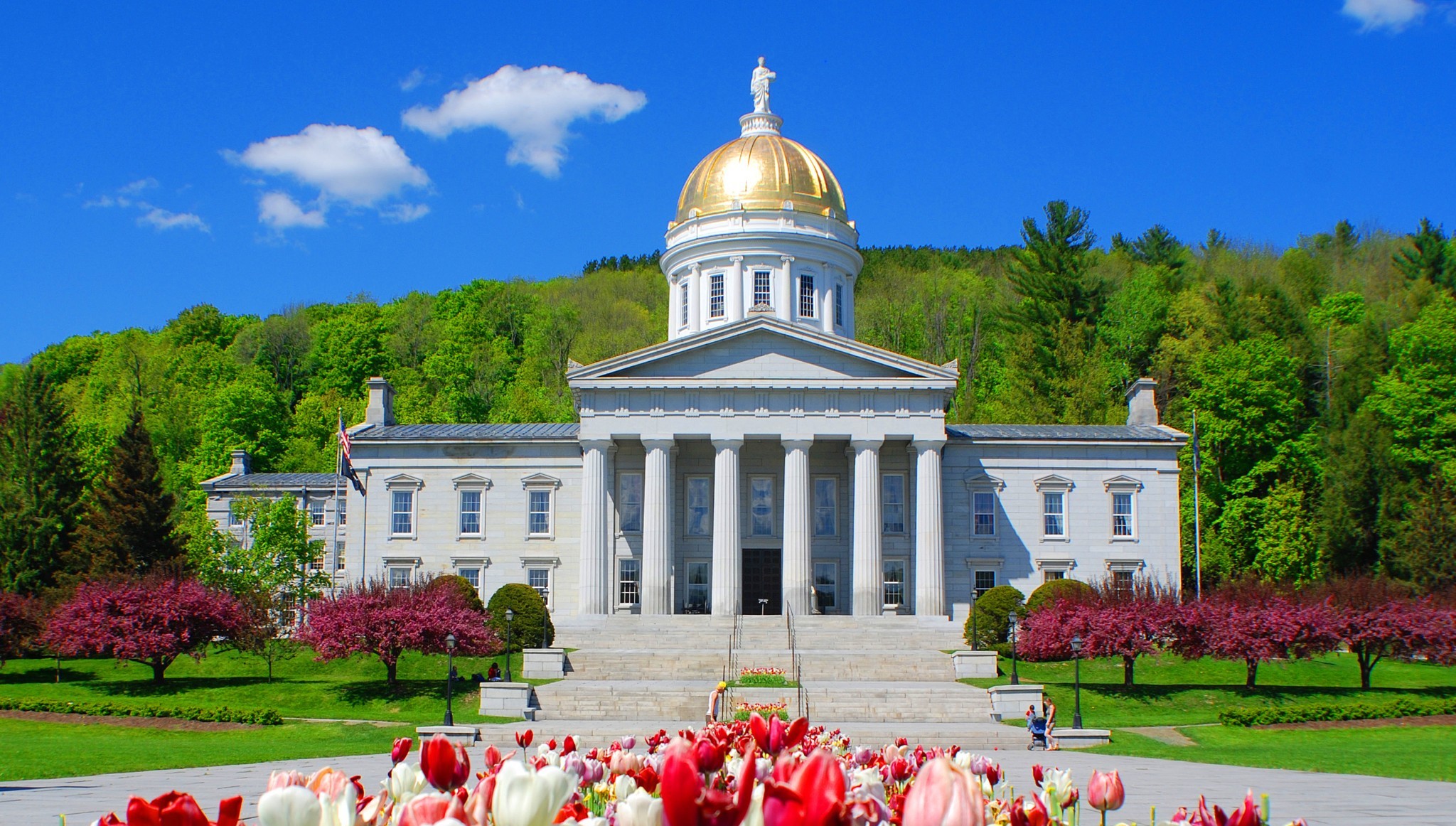 I lived in Vermont for four years some 35 years ago, and now I’m a Vermont watcher. The place in the 1980s was certainly liberal, center-left with a small radical fringe. There were conservative Republicans, multi-generational New Englanders who exuded common sense in all things political and cultural. But in the last three decades, the Green Mountain State has gone off the rails.

Its 9,600 square miles make it one of our smaller states (there are counties in some western states larger), as does its population of 650,000. It is one of America’s whitest states at 94 percent. During his tenure, former President Donald Trump’s approval ratings ran from 25 to 30 percent, which can be compared to Vice President Kamala Harris’ numbers nationally today. In the root cellar. So how did a church-steepled, bucolic state known for winter sports, vibrant fall foliage, quaint village greens, the rock band Phish, and maple syrup become one of the bastions of the contemporary radical American left?

It was not always so. Calvin Coolidge, the 30th president, was a favorite son born in Plymouth on July 4, 1872. “Silent Cal” continued the economic policies of his predecessor Warren Harding, whom he succeeded upon Harding’s fatal heart attack in 1923. Oddly enough, this taciturn Yankee presided over the “Roaring Twenties.” While Prohibition reigned and was ignored by half the country, and journalist H.L. Mencken sneered and hooted at the American zeitgeist while Scott and Zelda danced in fountains, Coolidge was busy reducing the federal deficit by 25 percent through tax cuts and restrained government spending. In Franklin Roosevelt’s 1940 landslide victory over Republican Wendell Wilkie, the latter carried just 10 states, including Vermont.

The post-World War II political era in Vermont was dominated by Sen. George Aiken, a Republican cut from the same cloth as Robert Taft and Barry Goldwater. Aiken held his seat for 34 years (1941-1975) and upon his retirement was America’s most senior senator. He was a canny politician who had breakfast every morning with his good friend Sen. Mike Mansfield, a Democrat from Montana. This was a good example of the bipartisan mood of the time and a good way to keep up with the machinations of the other side of the aisle.

In 1962, Vermont elected Philip Hoff to the governor’s office. Hoff was the first Democrat to hold the post since 1853. He was young and energetic in the Camelot mold. He supported Lyndon Johnson’s “Great Society,” but split with Johnson on the Vietnam War. He was an enthusiastic supporter of Sen. Robert Kennedy’s tragic 1968 presidential bid. Hoff’s gubernatorial tenure was the first chink in the armor of a century of GOP dominance in Vermont politics.

The 1960s brought political and cultural change to Vermont as it did to the rest of the country. The agricultural economic model remained dominant and land — compared to today — was cheap. In 1970, the average cost of an acre of land was $197 (as compared to $737 a decade later and many thousands today). This sparked a communal back-to-the-land movement in rural New England, as idealistic Baby boomers flocked to the country life to escape distressed cities and political chaos resulting from the Vietnam War and civil rights-era turmoil. Suddenly, staid George Aiken voters had crazy hippies living down the road, smoking dope and pursuing sexual liberation, milking a couple of cows and goats, feeding the chickens, tending an organic vegetable garden, and reading the “Whole Earth Catalogue” to the kids before bed.

This initially made for some bad blood, but soon, the newcomers, many of whom were educated at elite eastern universities, began to participate in local municipal government, getting elected to city councils, school boards, and county offices.

Bernie Sanders, who spent the 1970s subsisting on odd jobs in Burlington, was elected that city’s mayor in 1981. Burlington — the home of the University of Vermont — has always been a typically liberal college town, but Sanders’ eight-year reign pushed it over the edge. He was good at cosmetic stuff like parks and promoting a revitalization of the city’s Lake Champlain waterfront. But he spent an inordinate amount of time battling with more moderate members of the city council and putting much stock in observing anniversaries like the triumph of the Sandinista revolution in Nicaragua and cultivating a sister city relationship with Yaroslavl in the Soviet Union. He was also chummy with two guys from Long Island, Ben Cohen and Jerry Greenfield, who in 1978 opened a small homemade ice cream parlor in a renovated gas station.

Bernie (everybody in Vermont calls him by his first name) first ran for Congress in 1988 (the year of George H.W. Bush’s Mike Dukakis rout) as he sought to capture Vermont’s lone House seat when James Jeffords sought a Senate seat, which he won. Bernie’s GOP opponent was Peter Smith, an administrative academic, who was at best a typical Vermont RINO.

I attended a town hall debate in Waterbury during that campaign season. It was Sanders, Smith, and two alternate party (a libertarian, a constitutionalist) men whose names escape me. Bernie dominated the debate with his inherent rhetorical bellicosity, as if he was Lenin addressing the Petrograd proletariat. Smith spoke in calm, measured tones as he made statements or answered the moderators’ questions. Bernie got into a yelling argument with the libertarian over some arcane 1988 Vermont issue, thus showing that he’d fight with anybody even if it was unnecessary.

I later shook hands with Smith and told him I’d vote for him. He gave me a flashing neon smile as he pumped my hand. He narrowly beat Bernie in 1988 and served one mediocre back-bencher term in the House. Sanders came back and won the rematch in 1990, thus inaugurating a radical era in Vermont legislative history (that soon spread to the statehouse in Montpelier). Bernie was a radical Democrat who became a radical Independent; Sen. Patrick Leahy was a dependable liberal; and Sen. Jim Jeffords was a dependable RINO who eventually became a dependable liberal Democrat. In 1991, Howlin’ Howard Dean began his long 12-year reign in the governor’s office, culminating with his highly entertaining 2004 effort to gain the Democratic presidential nomination.

A note on Phil Scott. He’s the only Republican holding statewide office in 2022. Moderate, fiscally conservative, socially liberal, he’s a shrewd politician who’s adroit at using his GOP minority in the legislature to his advantage on fiscal issues. That said, he mostly kowtows to the left on the cultural stuff (see the condom issue above). And as a close polls watcher, his anti-Trump bonafides are deeply ingrained.

In Chittenden County (Burlington), the new state’s attorney is a woman named Sarah George, who was recently appointed to her post by Scott (another bouquet to the left). George, 38, is an adherent to the prosecutorial ideas we see at work in New York, Philadelphia, Los Angeles, and San Francisco, cities with rising crime rates. Though, being a political appointee means, she didn’t need a dime from George Soros. According to the Vermont Digger, George states that she is: “Just doing my part to overhaul a racist and classist legal system … All it does is hold poor people in jail and let rich people out.” She opposes cash bail, the merits of which are currently being considered by the state legislature. The crime rate in Burlington has been stable the last few years, and we’ll see if the status quo holds. Though here’s an interesting news item: Mayor Miro Weinberger’s home was burglarized in January.

March 1 was “Town Meeting Day” in Vermont. It dates to the 18th century and is an annual opportunity to consider such local matters as municipal budgets, schools, property taxes, etc. Retail cannabis sales were on the ballot in 40 towns and passed in 33, joining another 33 that had passed in previous years. In the Burlington City Council races, the five wards elected progressives, Democrats, and Independents to seats. Not only didn’t any Republicans win a seat, but there were also no Republicans listed as running anywhere on the five ballots. And for the first time in the history of the Vermont town meeting, non-citizens were permitted to vote in the cities of Burlington, Winooski, and the state capital of Montpelier.

Patrick Leahy is retiring after 41 mostly distinguished, yet partisan years in the U.S. Senate. Leahy’s parting gift to his long faithful constituents? $800 million from that recently passed omnibus bill. His heir apparent for the seat is Vermont’s lone House member and Bernie’s protege, Democrat Peter Welch. Welch, 74, has held his House seat since 2007 when Bernie moved on to the Senate. His voting record is typically liberal.

Welch’s likely opponent in November will be Christina Nolan, 42, a former U.S. attorney for Vermont. Nolan is a lesbian and supported gay marriage and other aspects of the LGBTQ agenda. She considers herself an environmentalist and climate change advocate. She’s at best a moderate Republican in the Gov. Scott mold.

Her main problem is that she was appointed to her U.S. attorney post in 2017 by Donald Trump. Throughout his presidency, Trump suffered from those aforementioned abysmal approval ratings. A good way to look at it is that Trump is despised by three out of four Vermont voters. Nolan supports the retention of the Senate filibuster and no changes to current voter laws. While she portrays herself as that liberal Republican, most Vermont voters agree with former President Barack Obama, who called the filibuster a “relic of Jim Crow.” And they certainly don’t want to hand Sen. Mitch McConnell a GOP Senate majority. So her woke status would only help her if she were a Democrat. And besides, Peter Welch will be endorsed by Leahy and Sanders. So, good luck, Christina.

A story in the Vermont Digger quotes Nolan from her campaign video: “Leaders in Washington in both parties have lost their way. They are more interested in fighting each other and beating the other party.” A native Vermonter, Nolan wants “to give back to the state that gave me so much.”

I share that sentiment. Vermont gave much to me too. Too bad it’s not the same place.