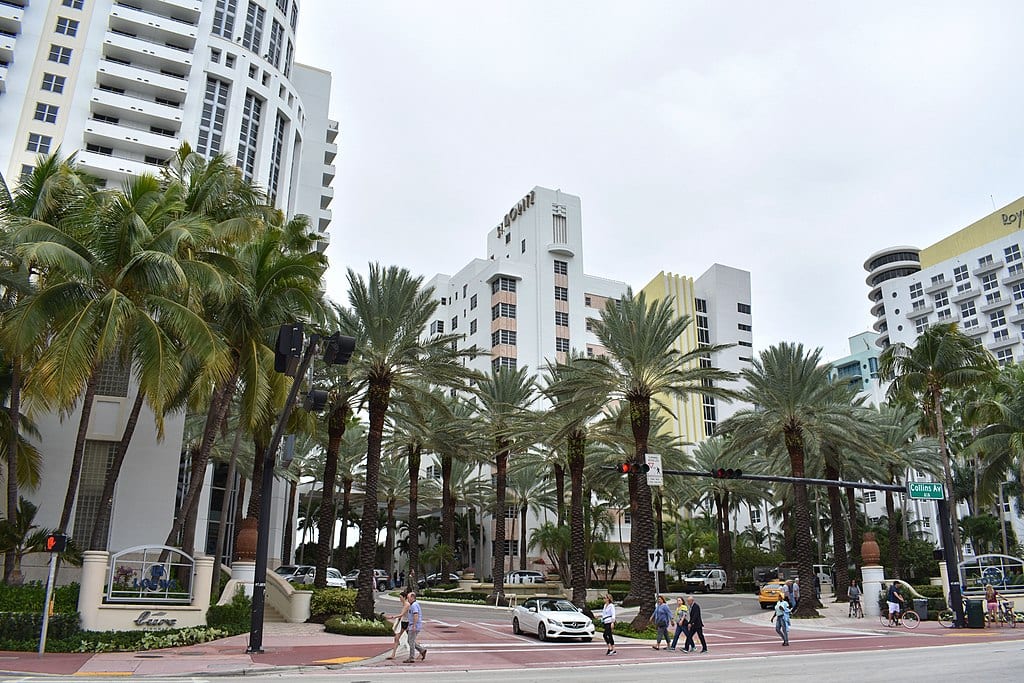 Here I am in Miami Beach with my friend and assistant, Bob Noah. He’s a super smart guy and I could barely travel without him. We maneuvered our way through the massive airport, got into our car, and headed for our hotel. Quite a shock. It was a tiny little place, no room service to speak of, and rooms too small for grownups. Still, it was clean and neat and I’m not paying for it, so it’s fine.

I cleaned up and walked across the street to a majestic hotel called the St. Moritz. That’s obviously where the rich people stay. It was loaded with well-dressed, happy-looking men and women who did get 24-hour room service and ocean views. No problem. They’re my audience so I want them to be happy.

I hoisted my portly self into the bar and ordered a very rare cheeseburger. My waitress was a beautiful young woman from Argentina with the beguiling name of “Coco.” Beguiling because that is my granddaughter’s name. She was as pleasant as a person can be. As I waited and ate, a parade of conventioneers came over and sat with Bob and me and shared their stories. They were also as pleasant as can be.

They are in the commercial real estate finance business and they all seem to be prosperous, maybe even rich. Plus, they’re thin. So, in addition to that, they all play tennis and golf. There’s a formula here about happiness. Health, Money, Interesting work… gratitude. They were all intensely grateful to be in America.

Gratitude. The only get rich quick scheme that ALWAYS works.

I talked to Coco about Argentina and she told me her dream was to be stage actress and singer in America. Well, why not?

A meal with a dear friend from Hollywood, Michael Chinich, and his lady friend, Lisa. Michael told me how fat I am, how stupid I am to be a Republican, and how if he had a choice between Hitler and Trump he’s not sure how he would vote.

I have to assume he’s not feeling well. Never mind. Michael has been a great friend to me over the years and if he hates Trump, well, he has a lot of company. I told him that knowing all we now know, I would vote for Trump ten times instead of Hillary. He grew morose upon hearing that.

He left for Fort Lauderdale and I stayed up with Bob watching Tucker on Fox news. It dawns on me that I spend a large part of my day watching Fox when I am on the road. It gives me a feeling of being at home.

My wife is at home, still very weak, and I hated like hell to leave her there but she insisted I go. She has her 24/7 nurses and many friends so she’s not too lonely, I hope.

I gave my speech. It was about the economy. I try to make it serious but also funny. It’s no simple trick to make a speech about tariffs and supply side funny but I manage to do it. I’m a rara avis, a comedian/economist.

The audience loved me or at least so they said. I packed up and got into my car with Bob and headed up the freeway to Fort Lauderdale. I slept the whole way and then in Ft. Lauderdale ate Japanese Benihana of Japan type food off a stainless steel grille. It was fabulous. Not just good — magnificent. A good meal while on the road is a super treat.

At our table, besides the magic chef, was a middle-aged rich couple from Costa Rica. He owns a manufacturing business and employs over 500 people so that is a big business. He told me about how he had inherited the business from his father, still alive at 92, and from his grandfather, an Italian immigrant who had to dye his hair black with shoe polish so he wouldn’t look too old when he sold ice in the summer and firewood on the winter.

Now, his grandson is rich and lives on an estate in Central America with a beautiful woman. What a great world this is. What a great thing capitalism is. Free markets and free men and women. And tasty Japanese food.

An early dinner with my pal Steve Greene, who had also been a great friend in L.A. and is now living in Florida. Steve was full of sad stories about various health problems he had. I guess I have my share, too. This is what it is like to be old.

Then a round of fundraising events for Broward College, an immense commuter school. The people I met were all pleasant except for a few who curl their lips when I talk about how much I love Fox News. The President of the campus is a very young man who had risen from modest birth in Queens to be a lawyer and then head of this college. He could not have been more charming.

I had a good crowd considering that the road show of Hamilton was playing in the auditorium right next door. The audience loved my saying that I thought the “collusion” investigation is hogwash. They cheered. But of course I might be wrong.

Bob and I flew up here Thursday. In a TINY plane. The only good part about it was that I met two off duty flight attendants who were fans. They were young and cheery and I liked them a lot. I’m sure I’ll never see them again, but they were friendly. Bob had rented a Ford Fusion. What a great car. Large, smooth, quiet. I loved it. We spent almost all of our time with my son and his gf and my ex-daughter in law and my super beautiful granddaughter Coco. We also saw half of Miss Saigon. I liked it but, like its inspiration, Madame Butterfly, it was too sad to watch. We left at the intermission and I am told I made a mistake because the last scene, of a helicopter leaving the U.S. Embassy in Saigon, was the best scene. I make a great many mistakes. I did get to eat some fabulous sushi at Sushi-Go in G-vile. The Chinese waitress told me I had huge ears and that meant I would be rich. She kept squeezing my earlobe as if money might come out.

My son behaved extremely well and my granddaughter is a doll.

I love Greenville. The friendliest small town on this earth. Or maybe it’s a small city. The waitresses at the Spoonbread Café at the Poinsett Hotel are angels. One of them told me she loved waiting on people. “I was born to be a servant,” she said calmly. Her colleague had made delicious homemade cupcakes for my Coco. Just on her own. What a saint. The town of Greenville is Oz and the whole South is magic.

Hell in the air. Our flight from Charlotte to LAX was delayed for 2 hours. We had to be deplaned and then put on another plane. The air conditioning worked only sporadically. There was no in-flight entertainment at all. It was torture. What on earth has happened to American Airlines?

But what glory to get home to my wife. She had no meanness in her at all. She cried with joy to see me and I did for her. She’s my goddess.