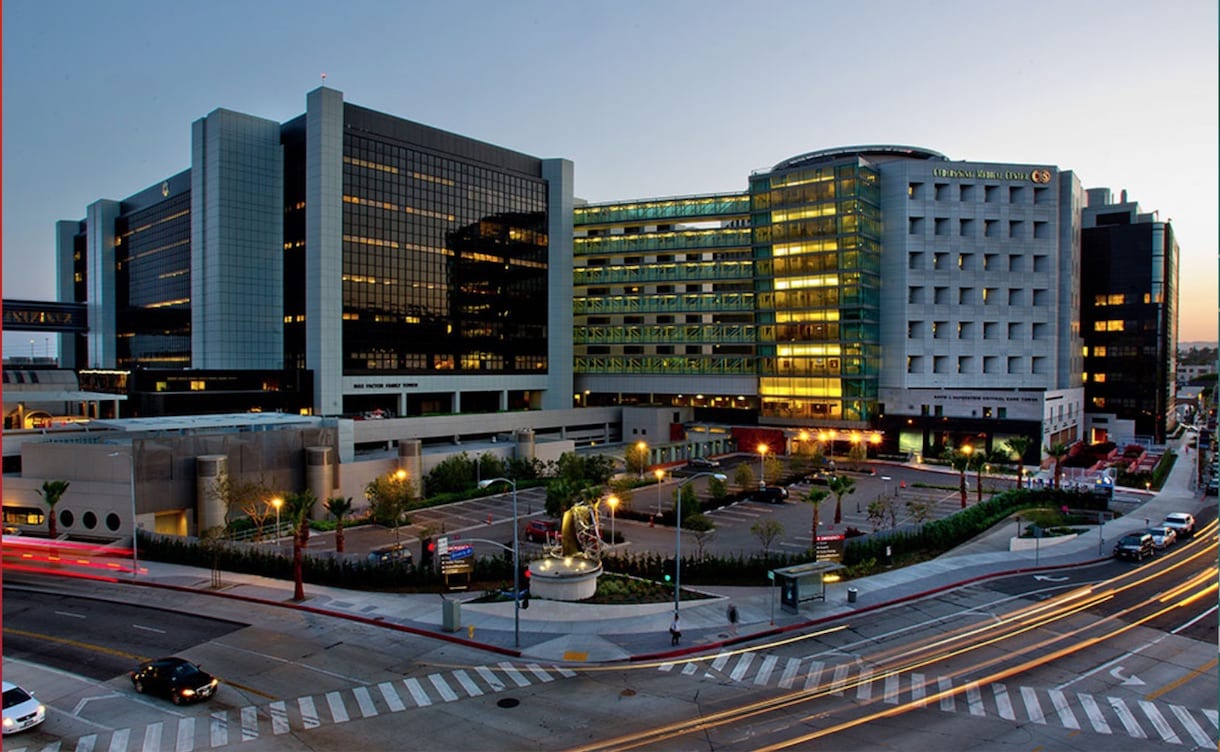 It was my birthday. I’m old. I lay in bed looking at my swimming pool and then started to put on my bathing suit.

Mary, our spectacularly good nurse who takes care of my wife on Saturdays and Sundays, came running — yes, running — into my room. “Miz Alex,” she said. “Oxygen very bad.”

I ran down the hall to see that my wife’s oxygen meter was in the mid-70s. It is supposed to be in the high 90s. Alex was dying.

I called 911. Literally within one minute, eight burly, strikingly capable looking young men appeared at our front door. (We live only seconds from the Beverly Hills fire department.) I opened the door and they ran up the stairs and slapped a “bi pap” oxygen mask on her. “This is a rough situation,” I heard one paramedic say to another.

In seconds more, they had her down the stairs and into a huge ambulance. I clambered in and off we went with lights and sirens. A few minutes after that we were in the Emergency Room at Cedars-Sinai and they were pumping her full of oxygen.

I was terrified. Doctors and nurses ministered to her for a few hours and then they brought her to a tiny 6th floor room. More ministering. More oxygen. Many, many, many more tubes into her sweet arms and then things calmed down. My dear friends Bob and Judah were over there. Alex was frantic alternately and then calm.

And that’s how it went for eight days. I did not get to celebrate my birthday except in the best possible way, sitting next to my bride, holding her hand. I kept thinking, “What is bound on earth is bound in heaven,” and wow, that would be great.

Many different doctors came in and out and none would tell us what had happened. Alex had been on 02 all of the week before her respiratory collapse. Nasal cannulae. She was on it the morning her breathing collapsed. So, what the hell happened? We don’t know and as far as I can tell, neither does anyone else. Alex apparently has pretty bad COPD and when it flares up, she just cannot breathe. She got it from smoking horrible filthy cigarettes.

The hospital insisted on releasing Alex three days ago despite my pleas that she was still not well, with many bad symptoms. So she’s been home now for nine days. She was surrounded by great nurses at Cedars and she is still surrounded by great nurses. They’re from Bangladesh and Mexico and Ukraine and Venezuela and the UK and Germany and Israel and above all, from the Philippines.

What a miracle country that must be to supply so many great nurses. All of our nurses at home — three in total — are from the Philippines. I must go there soon.

Anyway, our German short-haired pointer, Julie, who was very old for a GSP (we don’t know exactly how old because she was a rescue), had been deteriorating rapidly while Alex was in the hospital. She could not walk unaided. She was totally incontinent. She was deaf. She was in pain as far as we could tell.

We prayed over her intently and then decided it was selfish to keep her alive and suffering. We called a movable vet and next thing we knew, he was there sending Julie into immortality. She died with Alex and me holding her in our arms. For beauty, unselfishness, gentility, and gallantry, she was peerless. Dogs are so much better than people that it’s just cruel that they die so young.

Now our home is empty of dogs. The first time in 45 years.

Goodbye to George Herbert Walker Bush. We will miss him. He was a brave man, patriot, a hero. He’s just like I would like to be but I never will. He coined the phrase, “Voodoo economics” and I made much of it in Ferris Bueller’s Day Off. I made it up to him by saving him from investing a bundle in a fraud company by telling him it was a fraud. Karl Rove arranged that. What a great guy Karl is.

Anyway, my wife is going to be lonely in her room now without Julie so I have to go over there. I’ll just leave you with this thought complex. A curse on the fool who ran against Bush in the 1992 elections (hint, a really dopey billionaire). And if this country can elect Bill Clinton over George Bush, we can do anything idiotic.

That’s trivial. What counts is to spend as much time as you can with your wife. There is no meaningful life for me without my wife. Thank you, Dear God, and your servants, the paramedics, for saving her for me.