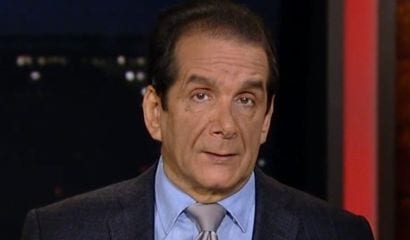 For more than three decades, millions have looked forward to reading his authoritative words every Thursday morning in theWashington Post and other media outlets. For the past decade or so, millions more tune in every weeknight to hear his resonant voice on Special Report with Bret Baier on Fox News. And now his new book, Things That Matter: Three Decades of Passions, Pastimes and Politics is now flying off bookshelves.

To begin with, Krauthammer matters because he is a master of his craft. Whenever I read his column or listen to him hold court, it is a constant reminder that I can do better as a writer and observer and that perhaps one day I will.

It isn’t just that Krauthammer knows how to turn a phrase although he most certainly does. Back in 2005, when noting how both the Gettysburg Address and the Second Inaugural are carved in their entirety into the Lincoln Memorial, Krauthammer quipped, “Lincoln’s gift for concision helps. Castro, of the eight-hour speeches, could not be so memorialized.”

In the grand scheme of things, when Krauthammer has spoken or written about America’s role in the world, Israel, stem cell research, the attacks of September 11, 2001, and the inappropriateness of building a mosque at Ground Zero, Krauthammer’s words have mattered and will continue to matter long after he is gone.

Or put another way, Krauthammer is to written and oral commentary what Picasso was to painting, Shakespeare was to the stage, The Beatles were to rock ’n’ roll, and what Vin Scully still is to calling baseball games. Although I suspect if Krauthammer were to decide to take up residence in the Washington Nationals broadcast booth, he would add something special to the national pastime. After all, it is rare for the same person to be equally at home extolling the virtues of both soldier turned statesman Sir Winston Churchill and pitcher turned outfielder Rick Ankiel.

Krauthammer matters because he serves as a reminder that we can pursue happiness despite the disasters that come our way. If you find yourself overwhelmed by your troubles just remember that he would not allow paralysis to prevent him from pursuing a career in medicine. Paralysis did not prevent him from abandoning that career to pursue another in journalism. Nor for that matter did it prevent him from becoming a husband and father. Krauthammer is living his American dream and is having a wonderful life.

Indeed, many of his admirers have never suspected there was anything physically wrong with Charles Krauthammer. When I watched Fox News’ special on Krauthammer last Friday and learned that Sean Hannity had no idea that Krauthammer is wheelchair bound, I said to myself, “He isn’t alone.”

About a decade ago, I had a conversation with a colleague at work about politics. During this conversation, we began discussing Krauthammer. My colleague then asked me, “So how long has he been in a wheelchair?” To which I quizzically replied, “What do you mean? I don’t think he’s in a wheelchair.” Of course, I was wrong.

With this in mind, perhaps the most revealing essay in Things That Matter was Krauthammer’s 1997 Time article, “FDR: The Dignity of Denial” in which he wrote about the opening of the FDR Memorial in Washington, D.C. Krauthammer objected to those who wanted the 32nd President of the United States depicted in a wheelchair:

Leave Roosevelt out of a wheelchair. But not by saying, condescendingly, Well, he lived in a benighted time; let’s make a concession to the attitudes he had to accommodate. After all, Roosevelt’s deception did not reflect the attitudes just of his constituents. It reflected his own attitude to his disability. It is not just that he never discussed his paralysis with the voters. He never discussed it with his mother.

The critics say that to fail to portray F.D.R. in a wheelchair is to give in to his false—i.e., nonmodern—consciousness about disability. On the contrary. It is to celebrate his ethos of bold denial.

There can be little doubt that the FDR Memorial matters to Krauthammer in a way that it does with few others. I am sure that article was his way of celebrating his own bold denial, although I am equally sure he would deny it.

What cannot be denied is that Krauthammer matters to conservatism. It does not matter that he did not start out as a conservative. What matters is that he became one. After all, as Krauthammer writes in the introduction to Things That Matter, “I was young once.” Or as Churchill put it, “A man of twenty who isn’t a socialist has no heart. A man of forty who is still a socialist has no head.”

Like many others before and many since, Krauthammer acquired his conservatism through experience. For Krauthammer, conservatism gained his allegiance first when Democrats opposed every facet of Cold War foreign policy of President Reagan, who also did not begin life as a conservative. Eventually, Krauthammer would also turn away from liberal domestic policy. As he writes in the book’s introduction:

As I became convinced of the practical and theoretical defects of the social-democratic tendencies of my youth, it was but a short distance to a philosophy of restrained, free-market governance that gave more space and place to the individual and to the civil society that stands between citizen and state.

Of course, Krauthammer is far from the only writer and commentator who matters to conservatism. Nor does one need to agree with everything he says and writes. For instance, I would never dream of asking Sarah Palin to leave the room. But disagreement is unavoidable and par for the course. On balance, Krauthammer’s analysis of the issues that have mattered most over the past thirty years have more often been right than wrong. For conservatives, that certainly ought to matter.