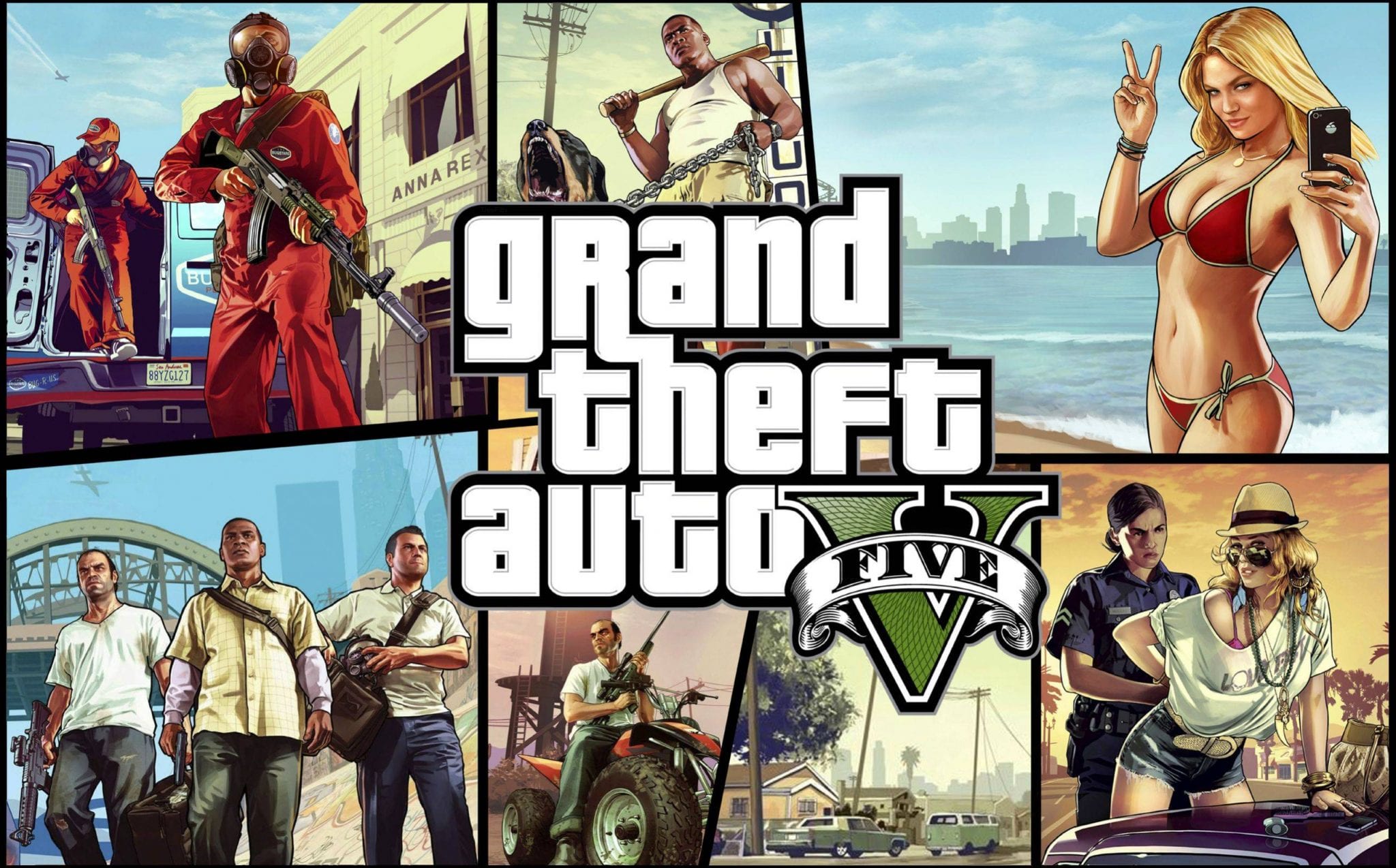 Trending
The Prisoner of the Vatican
by George Neumayr
AOC Hit List Targets Two Dozen Democrats
by David Catron
The Stain of Theodore McCarrick Is Impossible to Expunge
by George Neumayr
Sign Up to receive Our Latest Updates!
Register
Hot Off
The Press
Blog
Trump Will Speak at the March For Life
by Hannah Rowan
Impeachment Notebook
How the Dems Lost Day Two
by E. Donald Elliott

This year’s biggest blockbuster didn’t appear in movie theaters but in living rooms. Grand Theft Auto V, the sprawling, cartoonish vice simulator of a video game, was released on September 17 and earned $800 million in just 24 hours. By the end of the week it had passed $1 billion in sales worldwide.

Like the game’s predecessors, Grand Theft Auto V is a violent, profane sandbox, allowing players the freedom to engage in the sorts of brutal behavior for which we tend to lock people up for long periods (sometimes ending with a trip to an execution chamber). So, as with the game’s predecessors, its release evoked fretting in the media about its content and reminders that it is intended for mature audiences.

Around the time the game hit store shelves, Aaron Alexis went on a deadly rampage at the Navy Yard in Washington, D.C., killing a dozen people. Subsequent analysis showed Alexis to be a deeply psychologically troubled man struggling with paranoia. But before the details began to emerge, a writer for the Telegraph noted a friend’s observation that Alexis would play video games for hours on end. The article ran under the headline: “Aaron Alexis: Washington navy yard gunman ‘obsessed with violent video games.’” Thisproved to be mostly an outlier. The more information trickled out about Alexis, the more we all realized that the root of the violence lay in his obvious mental issues, not his recreational activities.

Even so, video games remain a favorite cultural whipping boy when discussing the roots of mass violence among men. Because it’s a relatively young form of entertainment compared to books, movies, and even television, scientific research on the impact of video game violence on the mind is not exactly exhaustive, allowing both sides to brandish studies like rapiers. I’ll confine my own academic defense to a single flourish. A study by Christopher Ferguson of Stetson University in Florida published this year examined whether children with pre-existing mental health issues like depression or attention deficit disorder would be negatively affected by exposure to violent video games. Ferguson’s study concluded they were not.

Ferguson’s research is particularly important because I doubt many critics of violent video games believe they can just turn people randomly into psychotic killers with no grasp of reality. The psychological problems of young, male mass killers extend beyond video game obsession. So the question has typically been how much weight to give this hobby. How much do video games contribute?

If you were to gather a random sampling of young men, let’s say between ages 15 and 21, in the United States, odds are that most of them have played video games. A Pew poll from 2009 showed that 99 percent of teen boys play video games regularly. Video games are not an unusual subculture or a hobby; they are our culture now, as common a form of entertainment as books and television (certainly more common than books to the dismay of some).

At the same time that video games have grown into a mainstream form of recreation, violent crime in America has dropped to the lowest it has been in decades. We can throw psychological studies at each other, but statistically, actual crime figures do not suggest a massive uptick in violence correlated with the explosive growth of video game popularity.

Further, the fact that video games—even violent ones—have become ubiquitous means that in all likelihood, every young male spree killer will have played a number of them. The anomaly would be if a killer hadn’t played video games.

Sometimes, video games can be directly tied to incidents of real violence. What should we make of the case of the eight-year-old boy in Slaughter, Louisiana, who over the summer picked up a gun and killed his elderly caregiver after playing Grand Theft Auto IV? Unfortunately, what little media coverage the case has garnered has been superficial, and the debate seems to revolve around whether the gun or the game is responsible, not why the boy had unmonitored access to either.

Video games have ratings, just like movies. Even bookstores separate products aimed at children to help guide parents and guardians to options that are appropriate for the young. The marketplace provides plenty of information for the adults in the room to make informed decisions. I support an adult’s right to just about every form of entertainment under the sun that doesn’t deprive his fellow man of life and liberty—including gambling and pornography. But that’s not the same as recommending that the very young be exposed to everything that’s out there.

Because the Supreme Court has determined that video games—even violent ones—have First Amendment protections, any discussion of government intervention in the industry is largely academic (despite what pro-censorship politicians may threaten). Any measure to control access to violent video games rests in the hands of a child’s parents, which is where it belongs.

I would conclude by pointing out that video games aren’t just a huge market, but one that contains remarkable, amazing variety. Those who aren’t avid gamers may only see major, big-industry productions like Grand Theft Auto. But there’s a growing crop of independent, smaller games, and plenty of games out there are specifically designed for children. Parents need to engage in this recreational activity, not fear it, in order to better guide its influence on their children.

A world without violent video games is not a real option on our metaphorical table. Therefore the more comfortable and knowledgeable we are about such games, the easier it is for us to make good choices.

The Withering of Conscience

The greatest of all ghost story writers, Montague Rhodes James, once described how, “when you were a child, you may have pored over a square inch of counterpane until it became a landscape with wooded hills, and perhaps even churches and houses, and you lost all thought of the true size of yourself.”

Perhaps you know what he means. I do. Oddly enough, I experienced it when, living and working in Soviet Moscow, I became dependent on a small computer for most of my links with the outside world. I found to my alarm that I had lost all thought, not just of the true size of myself, but of where I was and what time it was.

In those days, there were no images to beguile me, only words. But even so the machine drew me in. I had already noticed this odd power. I’d had to tear myself free from idiotically crude screen games in bars. I’d seen, in a grubby café in a French seaport town, a child, perhaps 11, smoking a cigarette as he busied himself with some electronic contest. He had the face of a man of 60, set, white, tense, and enslaved. A flock of sheep might have come bleating through the room, and he would not have seen them. He was elsewhere. His life had dwindled into the screen, and he fed the machine coins with the movements of a sleepwalker.

At that moment I decided that it would be one of my duties in life to keep any child of mine as far away from such screens as possible. Not all drugs are chemical, nor do they need to be swallowed. I had thought for years that leaving a child unsupervised in front of a TV screen was as wicked as allowing that child to quaff neat gin straight from the bottle. I have been painfully aware, as I have grown up, of the damage that even my own limited watching of black-and-white television in childhood has done to my imagination and concentration. I shall never be able to read as deeply as my father’s generation could.

But the computer game goes further. It makes the player collaborate in his own surrender to someone else’s mind. I don’t know what it is about the glow, the colors, the movement, the absence of normal time. But I think the free-minded, independent human being must surely fear this on sight.

I have only read reviews of Grand Theft Auto V, the latest and most captivating of these games. I don’t wish to sample it, any more than I wish to take the drugs I wearily insist should still be illegal. What I notice about the sympathetic reviews of GTA V is the way they stress the game’s wit and satire. One such review, after detailing its misogyny and actual torture, whoops, “It is fun, so much guilty, ridiculous fun.”

Well, yes, of course. Real evil, the kind we all actually do and conspire in, always cloaks itself in the pleasing garments of laughter. The most unctuous flattery is ironic, but no less acceptable for being so. The really cruel boss, willing to wound but fearing to strike, dresses up his most withering rebukes as little jokes. Laughter, far from being the sound of innocent pleasure, is often an aggressive affirmation of membership of a clique, the loud cackles a sign to outsiders that they are not part of whatever is going on.

Something similar happens to anyone who wonders if these games could be doing any harm to those who play them. Members of the gang laugh among themselves at the absurdity of any criticism of what they do.

First of all, the critic is accused of being old and out of touch. Well, I am old, and increasingly pleased to be, but if I were out of touch I wouldn’t even know about this stuff. They cannot have it both ways.

Then I am charged with saying what I don’t—that people who play games in which they constantly pretend to be gangsters and violent criminals immediately go out into the street and act as they have on the screen. Of course they don’t. Unless they are unhinged, they know that in reality actions have consequences. Even in modern Britain, if you commit enough crimes (quite a few in our case), something bad will eventually happen to you.

Let us have a little subtlety here. The point is quite different. It is about habituation. On a dark cold day some years ago, I was in Kashgar, the Silk Road city in Chinese Turkestan, for the day of “Korban,” when every grown male sacrifices a sheep to mark the great day of Eid. The streets actually do run with blood. I watched, first with disgust, then with fascination, and then—I admit it—with guilty enjoyment, as throats were slit and living creatures struggled in the hands of their merciless killers.

Having seen that, I knew for certain I was capable of worse things than I had been before. In a different but equally telling experience, wandering through the tents of famine victims in Mogadishu some years ago, and seeing the faces of dying babies, the flies crawling over their lips and eyes, I was taken aback to find how unmoved I was. I had lost the power to weep. I had seen it a hundred times on TV.

Familiarity, direct or on screens, hardens our hearts and rots our morals. We become less kind, less patient, and more selfish—never a difficult path to follow in any case. We do not know it is happening until afterward. It cannot, in my experience, be reversed. The more we allow others to replace our imaginations with fantasies of greed, lust, and cruelty, the more we cease to be ourselves as we should be. Even as I write this, I am seized by the pointlessness of doing so, when so many forces, of pleasure and profit, pull the other way.