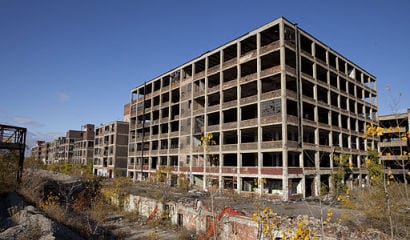 DETROIT — Former Mayor Kwame Kilpatrick was sentenced to 28 years in federal prison last Thursday for graft, racketeering, extortion, and conspiracy to use city hall as what Judge Nancy Edmunds called “a criminal enterprise” to enrich himself, his family, and his cronies. This came two weeks after the Obama administration announced it would give the city $300 million to help bail it out of financial ruin. In July, Detroit filed the biggest municipal bankruptcy in history. Fixing this mess is about more than finances.

There’s a saying that’s popular on the mean streets of Motown: If you can’t beat ’em, beat ’em up. This mindset has severe consequences for a city that has been in a death spiral for six decades. Much of the damage is self-inflicted.

The former Arsenal of Democracy that produced the machinery to win World War II now primarily churns out tales of barbarism. There has been a lot of media attention recently on an estimated 50,000 wild dogs that are running around in rabid packs, yet it’s the human misery that is hardest to comprehend. There were 411 homicides reported last year, but the actual number is much higher and unknown, according to one federal official. “There are over 70,000 empty buildings, and on a daily basis when law enforcement enters them, they turn up dead bodies whose date of death can’t be accurately estimated because they are too decomposed or torched,” I was told. “Countless murders in Detroit aren’t counted in official data.”

It’s hardly surprising that in 2012 Detroit was named by Forbes as the nation’s most dangerous city for the fourth year in a row. Locals take a certain perverse pride in the dubious distinction of being the unchallenged roughest place in the country. Home-grown music stars such as Kid Rock, Eminem, Alice Cooper and Ted Nugent — the original “Motor City Madman” — have long traded on the bad-boy image. The championship Pistons basketball teams of the late 1980s and early ’90s were nicknamed the Bad Boys for being as effective with their knuckles and elbows as their jump shots. Team merchandise was emblazoned with the skull and crossbones.

When city hall gave the thumbs up to a marketing slogan, “Say nice things about Detroit,” t-shirts immediately cropped up with the motto printed above a smiley face with a bullet hole in the forehead. Another version had an image of a thug holding a handgun to a puppy’s head. Nice, indeed. A shirt currently selling like hotcakes in the metro area simply warns, “Detroit vs. Everybody.” Even car commercials, such as Chrysler’s popular “Imported from Detroit” spots, romanticize the gritty post-industrial reality of the Motor City by portraying urban decay as somehow cool, and that this crumbling concrete jungle is a different, edgy world all its own.

The well-earned bad-ass image creates problems for the few competent professionals trying to turn the town around. On the top of this list is emergency manager Kevyn Orr, who made the decision to take the city into bankruptcy to try to free it from some financial liabilities to balance the books, which currently suffer from a staggering $327 million deficit on top of $20 billion in debt. In interviews, Mr. Orr uses words such as revitalization, comeback, and renaissance to describe his goals. He has a job to do so it’s understandable that he pushes an optimistic message, but beneath the surface this reinforces a cult of denial among Detroiters who kid themselves into believing that a few quick-fix reforms will help this phoenix rise from the ashes like the flaming chicken on the hood of a 1970s Pontiac Trans Am. Nothing of the sort is possible.

Several factors weigh heavily against the narrative of a Detroit turnaround. The first major hitch is that there is a rapidly diminishing number of interested parties. For years, the city’s black leaders blamed all their problems on white flight, but it has been the evacuation of the black middle class in the past decade that emptied out the few remaining viable neighborhoods and accelerated the budget crisis. Half of Motown’s property owners don’t bother to pay their taxes, amounting to a $247 million shortfall in revenue last year alone. Institutional stakeholders who believed in the city enough to invest in the past have gotten burned and will be lucky to get pennies back on the dollar through municipal bankruptcy. For good reason, there is a crisis of confidence among businesses, pension funds, unions, residents, neighboring regional governments, and everyone else needed for even a modest resurrection.

For the most part, since the 1980s, significant investment in Detroit has been limited to the civic-minded work of a few benevolent billionaires, such as Tigers and Red Wings owner Mike Ilitch, who reversed the business exodus from downtown when he moved his Little Caesars Pizza corporate headquarters there from the suburbs and rolled loads of dough into renovating the theater district. He was followed by the Fords, who moved the Lions from the suburbs into a new inner-city stadium, and Dan Gilbert, founder of Quicken Loans, who’s acquired and is rehabbing 40 major Detroit properties. These leaders are a godsend — but not enough to revitalize a vast cityscape of 140 square miles, a majority of which is abandoned wasteland.

The most systemic hindrance to long-term progress is the debilitating incompetence of municipal government. Michigan Gov. Rick Snyder had to resort to using executive powers to force the emergency manager on the city because the mayor and city council refused to take positive action either by appointing their own emergency manager or through fiscal steps to stave the red ink. The governor’s reward for taking on this headache is a legal challenge to the bankruptcy mounted by the American Federation of State, County and Municipal Employees, which is accusing Mr. Snyder of conflicts of interest in Lansing’s intervention into Detroit affairs.

The main explanation for the incapacitated city government is top-to-bottom corruption that rivals Third World banana republics for its brazenness. Dozens of municipal officials and contractors — from the deputy mayor and chief of staff to the director of the water department and pension fund heads all the way down to street cops and safety inspectors — have been convicted in a federal probe into Detroit’s dirty deals. Former councilman Monica Conyers, wife of U.S. Rep. John Conyers, is in prison for demanding payoffs for her city-council votes. Before last week’s sentencing, Mayor Kilpatrick — who was forced from office after a sexting scandal involving his chief of staff/lover — had served two previous prison terms for institutionalizing bribes and kickbacks as a requisite for doing business with the city.

No one voices the sentiment publicly, but in hushed tones, business leaders and state officials commonly admit that Detroit is an example of a place where self-rule has failed. Residents have voted with their feet, diminishing the city from a population of nearly 2 million in the 1950s to a little over 700,000 now. Except for a couple tiny, hip areas, the only residents left in Motown are those who don’t have the means or are too elderly, drug-addicted, or otherwise incapable of leaving. Years of crippling mismanagement raise the question whether this feeble demographic is one that can make the informed decisions necessary to run a city.

The Big Three automobile manufacturers have staged a comeback, with Ford, Chrysler and General Motors all reporting regular profits, but the Motor City still has a long, bumpy road to travel before it gets turned around, if it can be turned around. The bleak reality is that Detroit’s problems may be too deep and the political will too shallow for the city to ever make a comeback. To see what a completely failed large city looks like, take a walk around Motown. But what can be done about it? The hard truth might be that there is no way out other than to get the heck out.