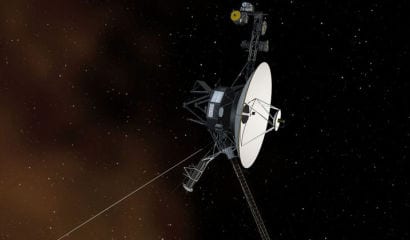 Recently, NASA announced that its spacecraft Voyager I, which was launched in 1977 during the Carter administration, has left our solar system and is hurtling into interstellar space. Voyager is currently an astonishing 11.6 billion miles from Earth.

While Voyager’s scientific instruments shut down long ago with their primary mission brilliantly accomplished, the spaceship continues rocketing onward into deep outer space with greetings from our scientific community and the fantasies of millions of Trekkies and other science fiction buffs who believe those creepy green creatures really are “out there.”

Voyager carries “Golden Records” with warm greetings to any forms of extraterrestrial life it may encounter out there. It’s a “welcome to Earth” message like a glossy advertising brochure for an exclusive vacation resort (“Come on down…”).

Voyager’s “Golden Record” contains beautiful, full color photos of the Earth, pictures of a man and woman, welcome messages and a promise that “we come in peace” from President Carter and then Secretary-General of the UN Boutros Boutros-Ghali, together with a chart of the solar system and detailed directions to our own jewel, planet Earth.

Now, I’m certainly not an alarmist or an isolationist, but I don’t think that unbridled scientific zeal or the short-sightedness of astrophysicists should govern our intergalactic immigration policy. After all, the alien invitation carried by the Voyager spaceships makes several serious assumptions:

• That alien beings who discover Voyager I and read our message of peace and welcome will be friendly “E.T.” types.

• That they will be perfectly content where they are and totally uninterested in sampling the wonders of our Earth.

• That, if they are not friendly, our message of greeting will make them peaceful and kind when they come to visit.

• That they won’t be totally insulted and angered by our telling them things they already know about us after decades of voyages to our planet in their own spaceships that we have disdainfully called UFO’s.

Anyone who has read any science fiction knows that, until the advent of “E.T.”, most space aliens were frightening, predatory creatures whose evil mission was to conquer or destroy plant Earth. No one in his right mind would extend an open invitation to such nightmarish extraterrestrial monsters, much less provide them with a detailed road map to our home.

Worse yet, this invitation to potential alien enemies is irrevocable. The messages we launched almost four decades ago continue to be official Earthling policy (albeit a diplomatic gesture never approved by our Congress, the UN, or even NATO).

I suppose we could rush to develop and launch another, much faster rocket and attempt to intercept and destroy the Voyagers to formally withdraw our invitation to space aliens. But such a “Star Wars” strategy is clearly too little too late. Those evil aliens may be studying the road map to Earth right now — planning their visit, or God forbid, their invasion.

So, all in all, there is little we can do to prevent Voyager I from continuing on with its secondary mission of extending the olive branch and invitation to those space aliens.

Oh, I realize that there may be no one at all out there. And, even if there were, they may never have a close encounter with the Voyager spacecraft. They also may be totally peaceful and content where they are or they may lack the technology to travel to our solar system.

But, on future missions into deep space, let’s not invite “them” home for dinner, at least until we know who the heck they are!