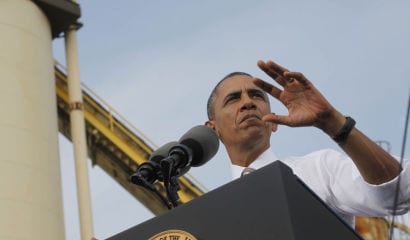 Because Barack Obama was elected on a campaign promise of “fundamentally transforming” the United States, and because our nation then proceeded to lose much of its international influence and domestic economic dynamism, it is easy to say “this is intentional. It’s just what he wants.”

Yet while Obama might, in his heart of hearts, not bemoan the loss of jobs and economic growth at home, and American power and prestige abroad, ascribing it to an intentional effort gives Obama credit for qualities and skills he does not possess.

It surely feels that way sometimes.

But politics has rarely seen an elected leader, a man of supposed vision (even if a dark one), a prophet of hope and change, so desperate to do anything other than his job (and so eager to be on the golf course) as the current American president. He is not capable, or does he work hard enough, to “design” such fecklessness?

The current chaos over federal government funding and its morbidly obese half-brother, the debt ceiling, is notable for Barack Obama’s absence. He is nowhere to be seen (except possibly teeing off) other than an occasional bit of televised vitriol attacking the “Republican shutdown” and Wednesday’s faux-meeting to reiterate that he won’t negotiate with Republicans (but he will plead for a handshake and discussions with the president of the terrorist regime in Tehran).

This is not leadership. It’s not even a particularly good political tactic. It is the behavior of a bully and, to put it plainly, a liar.

Obama’s shutdown rhetoric are not the words of a man who is honestly open to hearing the ideas of others; they are the words of a petty tyrant, an Alinskyite thug, whose true opinion of the GOP was summed up in 2008 when he said, “If they bring a knife to the fight, we bring a gun.”

Much has been written about how likely Republicans are to find a way to lose — and it’s not a bad bet based on history. But if the president is not the brilliant and devious manipulator that many give him credit for being, just a few smart Republican maneuvers might start the polls moving toward equal blame for all sides, and thereby push the president to stop jumping up and down with his fingers in his ears, yelling “I can’t hear you!” Passing small bills funding popular parts of government, as the House has done several times in the past few days, is a good start.

The president’s lack of leadership is entirely within character and consistent with his history. Even his signature piece of legislation, Obamacare, was written by senators and lobbyists, with the president waiting in the background, ready for an unearned victory lap, emotionally and functionally unable to lead the charge for one of liberalism’s most cherished policy goals.

Private health insurance is collapsing, along with your choice of doctors, as prices explode.Physicians are retiring early, cutting back hours, and refusing to take new Medicaid patients — just as Obamacare aims to turn millions of Americans into little more than glorified Medicaid enrollees. The rate of “U-6” unemployment (which includes underemployment) is mired at a painful 14 percent. The national debt is up 60 percent since this president took office, representing a staggering current burden of over $53,000 per citizen and $148,000 per taxpayer.

But none of this — not the true effects of Obamacare, not the jobs stagnation, not even the national debt — represents Barack Obama being successful even in the context of his own simplistic world view, best summarized in his own words: “I do think at a certain point, you’ve made enough money.”

After all, thanks to cronyism, clever lobbyists, and the true nature of Progressive policies, the people Obama most claimed to want to help, namely the lower rungs of the American income ladder, are stuck in a swamp of the president’s creation with only more punishment in sight. Median household income has plunged under this president, with a devastating 11 percent drop among black Americans. Obama has indeed redistributed our money: to unions, bankers, and political donors. He’s not even a good socialist.

Vanishingly few of the Democrats’ legislative or electoral victories are due to President Obama being notably cleverer than any other well-practiced politician-fabulist. Even the most committed ideologue needs a modicum of leadership skill to be an effective leader. Obama has none, and therefore isn’t one. The many negative results of his presidency are not by design. He’s just not that clever.

His diminishment of the U.S. in foreign affairs is equally accidental, pace the musings of many experienced political commentators.

Writing in the Wall Street Journal, Norman Podhoretz writes that Obama’s foreign policy failures, particularly regarding Syria, are actually “a brilliant success as measured by what he intended all along to accomplish.”

And Rush Limbaugh (in large part discussing the Podhoretz article), recently wondered, “[Is] the decline of America by design?” while adding a bit of self-congratulatory “I like being joined” — apparently he believes the answer is a resounding “Yes!”

Whether the United States has declined in every relevant aspect on the international stage is beyond debate. Even the New York Times was compelled to state the obvious when reporting on President Obama’s recent address at the United Nations: “In the morning, it was a somewhat diminished American leader who faced a skeptical audience of world leaders here.”

The Washington Post editorial board complained that Obama’s approach in that same UN speech “can only diminish U.S. influence…”

And a few weeks earlier, the liberal website Daily Beast discussed “How Obama Lost His Influence in Egypt.”

Conservatives frequently refer to Barack Obama’s dismissal of American Exceptionalism, his promise of more “flexibility” with Russia, and his assertion that “No world order that elevates one nation or group of people over another will succeed” as evidence that a weakened United States is the intentional product of a considered strategy.

With his foreign policy being made by accident and gaffe and people with names like Vladimir, there is little reason to view Barack Obama as particularly clever or as an effective player on the chessboard of international affairs.

Instead, he is the subject of manipulation by every foreign leader from Mohamed “So this is what Mubarak felt like” Morsi to Vladimir “See my new Barack yo-yo” Putin to Bashar “Here’s my sarin (wink wink)” al Assad to Hassan “Shake this, Barack” Rouhani.

Obama’s apologetic calls for Islamic appreciation of a new American approach were not a subtly brilliant way to get jihadists to hate us even more.

His unscripted “red line” was not an imaginative ploy to make Secretary of State John Kerry look like a genius for his accidental off-ramp from a highway to a pointless, unwinnable war.

His disdain for American preeminence is not the cause of its waning; his fecklessness and stunning lack of leadership are.

After all, it remains likely that Obama, like many second-term presidents, will be forced by domestic politics, lame duck status, and various activities of foreign allies and opponents to focus the end of his presidency on foreign policy. For a man as profoundly narcissistic as Barack Obama, his inability to influence the stream of history any more than a thrown pebble influences the Mighty Mississippi will be personally frustrating and politically damaging (by even further reducing his clout at home).

It’s one thing to talk big on the campaign trail about taking the U.S. down a peg. It’s another thing when the main peg being lowered is your own influence.

Obama’s staggering incompetence on the international stage, careening from one unintended foreign policy consequence to another, is unmistakable because foreign affairs are almost exclusively the province of the president. He has no congressional human shields overseas.

Particularly for those still smarting from the Republicans’ inability to defeat a president whose first term was a tragi-comedy of stupid policies and their predictable results, it is tempting to ascribe a certain evil genius to the man who so often talks down the nation he dares to “lead” — a word used very loosely in this context.

But there is no aspect of Obama’s history, whether as a “community organizer,” undistinguished lecturer, state senator (frequently voting present), or president, in which he has demonstrated leadership, wisdom, or even a world view more sophisticated than that of a typical member of the College Democrats or its more radical predecessors.

Throughout George W. Bush’s presidency, Democrats mocked him as an idiot, a rube, even a chimpanzee. So why do conservatives routinely imply that Obama is a genius?

Those who oppose Obama make a mistake, both in terms of policy and politics, by ascribing his harmful impacts on the nation to Machiavellian cleverness, or by characterizing them as success by any definition — even his. Barack Obama has almost no idea what he is doing, why he is doing it, or how his actions affect ordinary citizens or the world around us.

While the most anti-American president in American history might not be too unhappy at the downward spiral of his nation’s international standing and economic strength, it is not by his design but rather a result of the sad accident of having (twice) elected a naïve, petulant, self-obsessed non-leader.

[One potential caveat: While Obama is not clever enough for his apparent imcompetence to be anything but real, some of his advisers/puppet-masters, like David Axelrod and Valerie Jarrett, are. For those enemies of America, Obama is just their front man, their very own Billy Mays, hawking a radical leftist vision in a pleasant container. The question then is what percentage puppet is our president.]

* The saying “Sometimes a cigar is just a cigar” is frequently attributed to Freud, but there is no evidence that he actually said it.