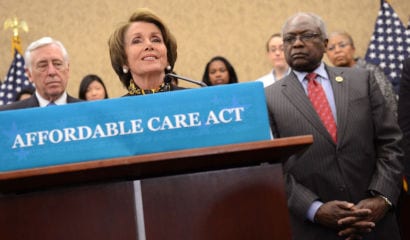 On Saturday, President Obama marked the birthday of his “most important domestic achievement” with a statement in which he catalogued the miracles this prodigy has already performed in its first three years. Among these, you may be surprised to learn, is that it is saving us money: “Most importantly,” he said, “the growth of health care costs is beginning to slow.” He made the same claim in his SOTU address, and his toadies in the establishment media dutifully repeated it, but the facts reveal this to be just another example of Presidential prevarication.

In reality, the costs associated with the “Affordable Care Act” are already confirming the gloomiest predictions of its opponents, which probably accounts for the continued unpopularity of the law. Like most three-year-olds, new entitlements are generally regarded with an indulgent eye. Obamacare, however, has proved to be an exception. In February, the nonpartisan Kaiser Family Foundation published a health tracking poll showing that opposition to the law had increased since its previous survey and an even more recent survey confirms that finding.

The latter was conducted on behalf of Reason: “Asked an open-ended question about what comes to mind when they hear the term ‘ObamaCare,’ 50 percent gave a negative response of some sort. At 24 percent, the largest single response was a generalized comment that the law is a bad thing.” No matter how often the President and his congressional accomplices invite us to admire the beauty of Obamacare, the public recoils from the creature. Regardless of the gaudy rhetorical frippery with which Obama & Co. adorn their progeny, the voters still know ugly when they see it.

This refusal, after three propaganda-filled years, to appreciate Obamacare has provoked the media into producing a fresh spate of articles about the public’s ignorance. A typical example can be found in this piece published by the Chicago Tribune: “Today, nearly six in 10 Americans say they still don’t have enough information to understand how the Affordable Care Act will affect them. Ignorance about the law is even higher among Americans who stand to benefit most.” In other words, the voters are so many swine before which Obama has placed a shining pearl.

But the problem is not that the voters are ignorant. The problem is that they understand Obamacare all too well. They know that every promise made on behalf of the law by the President has been broken. Milton Wolf’s recent column in the Washington Times itemizes the most brazen whoppers, including the pledge that Obamacare would reduce a typical family’s insurance premium by $2,500 a year: “The Internal Revenue Service estimates that the least expensive of the government-sanctioned health plans will cost the average family of four $20,000 a year.”

Not only have the voters noticed this huge divergence in promised versus actual health premiums, they also remember the stretchers Obama and his cronies told about the new government spending that would come with “reform.” The Heritage Foundation points out that the projected cost of Obamacare has moved upward with every new CBO estimate since 2010. In March of that year, we were told that it would cost $898 billion. A year later, the projection jumped to $1.16 trillion. By last month, the figure had gone up to $1.6 trillion.

Even if the country could afford that kind of money, the incompetence of the Obamacare implementation process has been such that anyone capable of critical thinking would be worried. The key to the success or failure of the law is its exchanges. The authors of Obamacare expected the states to set up these “marketplaces” so that people with no employer-based health insurance could shop for coverage at competitive rates. However, the law doesn’t actually require states to set up these exchanges and about half have declined to do so.

The problem is that any state setting up its own exchange will incur enormous costs that can be avoided by simply letting the federal government do it. This development caught the Obama administration flat-footed and now there are doubts that the Department of Health and Human Services (HHS) will be able to get the exchanges up-and-running in time for Obamacare’s first open enrollment period. Among other things, the technology required to make these “marketplaces” work is not going to be ready for prime time by that deadline.

The Washington Examiner reports that “Henry Chao, an official at the federal Centers for Medicare and Medicaid Services [which falls under the aegis of HHS] who is overseeing the technology of the exchanges… described himself as ‘nervous’ about the short timeline to get the exchanges up and running.” Chao has apparently given up on the notion that the exchanges and their technology will be efficient. He has been reduced to hoping that they won’t be an unmitigated disaster: “Let’s just make sure it’s not a Third-World experience.”

Such has been the story of Obamacare thus far. So much political skullduggery was required to get it passed that it began life, as Shakespeare might phrase it, “rudely stamp’d … deformed, unfinished.” And the law’s stupendous cost and clumsy implementation has not improved matters. On its third birthday, it is more grotesque than ever. Obamacare should have been exposed to the elements at birth.