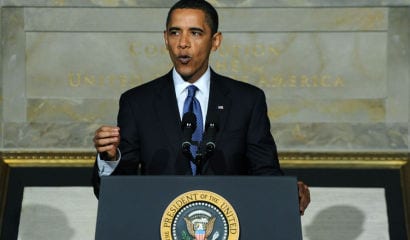 It was bad enough for the Obama administration to earn an overall grade of C-minus on its level of transparency from the independent watchdog group Cause of Action. When coupled with evidence of what is being hidden, the information makes the administration look even worse.

Cause of Action uses requests under the Freedom of Information Act (FOIA), lawsuits, and other tools to expose what it calls “job-killing federal government regulations, waste, fraud, and cronyism.” As has been reported by Caroline May at the Daily Caller and others, the organization last week issued a report called “Grading the Government,” assessing the responsiveness of 114 offices, within 16 federal departments or agencies, to FOIA requests regarding how those offices spend tax money on “promotional items” used variously as gifts, awards, or travel mementos.

FOIA laws, which are mandatory upon federal agencies, allow 20 working days from receipt of the request to production of the requested information (with obvious exceptions for certain categories such as classified information or information specifically claimed as exempt due “executive privilege”), with an allowance for the agency to receive an extension of another 21-30 working days. If an agency takes an extension, it must provide appropriate notice thereof to the requesting individual or entity.

Each of Cause of Action’s requests was filed no later than April of 2012 (with some as early as 2009) — yet, through February of this year, meaning at least ten months after the requests, an astonishing 29 offices, or 25 percent, had not provided any responsive information. Another 26, or 22 percent, took longer than 90 days to provide a response. And: “For the 86 offices that produced documents, the average response time was 75 business days with a median of 63 days, a figure more than double the 30 day window established by the Freedom of Information Act.”

This is an outrage — especially when viewed in the proper context.

By now, of course, President Obama’s pledge to run “the most transparent administration in history” has become a farce, with multiple left-leaning outlets joining in the denunciation of his team’s deliberate opacity. Key players for the Associated Press and the American Civil Liberties Union, for instance, discussed last week a new AP report showing that the administration is increasingly using “national security” excuses to withhold information — with the ACLU’s Alexander Abdo saying that “the type of secrecy we’ve seen under the Obama administration” is “particularly corrosive.” Washington lawyer and FOIA veteran Katherine Meyer told Politico that “this administration is the worst on FOIA issues” since she started filing such requests way back in 1978.

And this is not some new trend: The Washington Post carried a compelling column two full years ago called “Where’s the transparency that Obama promised?”

But what Cause of Action shows is that Obamite stonewalling isn’t merely a way to dodge accountability for (or, to be charitable, to avoid giving ammunition to opponents in) highly politicized disputes. The “Grading Government” report shows that even on rather mundane matters of government management, this administration stiff-arms the public with obnoxious regularity.

Cause of Action provided a letter grade, based on consistent criteria, for the responsiveness of each of the 16 agencies (or departments) from whom it requested the information. Two departments received “D” grades, four received “D-minus,” and two others each earned a flat-out “F.” In short, half of the departments received grades generally considered failing. One of those “D” grades went to the Department of Justice, which has a particular duty to enforce FOIA but instead is itself notoriously bad, and allegedly hyper-political, about complying with FOIA requests. (The recent Inspector General report on the department’s Civil Rights Division explained away much of the alleged politicization of the FOIA requests, but I personally remember some of those incidents and can attest that a few of what the IG described as “complicated” requests from conservatives, which supposedly required more time to comply with, were hardly complicated at all.)

It must be added that while I described the Cause of Action requests as “rather mundane matters of government management,” they concern practices that are anything but inconsequential. In these times of trillion-dollar deficits and a looming debt crisis, government waste is particularly galling — and particularly important to stop. When the watchdog group asked the 16 agencies to detail their “spending on promotional items,” it wasn’t an immaterial request. Last October, after six months of its investigation, it released a report called “Coin for Coins” about its findings by then.

In just nine agencies, the watchdog group found combined spending exceeding a million dollars on items such as “flash drives shaped like police cars,” “300 official game use hockey pucks with the DOJ COPS logo on both sides,” and “500 hamburger yo-yos.” As the report put it, “Overall, a pattern emerges from the data that demonstrates a spending problem in multiple agencies including failures to track and document spending on promotional items, making accountability impossible. From the nine agency offices examined in this report, all of them are found to be in potential violation of agency rules, ethics standards, and/or President Obama’s Executive Order on spending.”

These findings join other news reports outlining a litany of absurd government expenditures — such as grants studying the effect of environmental factors on the size of duck private parts to creation of “robo-squirrels” and financing a “prom video game” to “enable novices (non-programmers and non-expert storytellers) to create interactive dramas.”

As one Inspector General last year described some of the spending by the General Services Administration, these are among many examples of expenditures that are “excessive, wasteful, and in some cases impermissible.” The only way such idiocies can be stopped, and taxpayer money saved, is to hold them up to public scrutiny. But that can’t be done if the agencies consistently violate the law requiring openness with public records. By issuing its “Grading Government” report, Cause of Action puts more pressure on the feds to abide by the law, and by the spirit of representative (and responsive) government. When a group like that succeeds, it is a cause for satisfaction.

Ben Stein
Follow Their Stories:
View More
Ben Stein is a writer, actor, economist, and lawyer living in Beverly Hills and Malibu. He writes “Ben Stein’s Diary” for every issue of The American Spectator.
Most Popular
1
At Large
The Lingering Fog of War and Lessons From Vietnam
by Mark Moyar