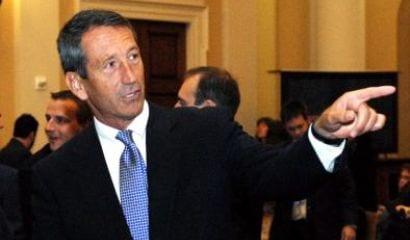 CHARLESTON, S.C. — There are many ways to look at the results of Tuesday’s special election runoff here, the most brutal of which I sent out on Twitter shortly after Mark Sanford was declared the GOP nominee: “So, it’s official now: Adultery more popular than Jesus with South Carolina Republicans.”

Brutal, and probably offensive to some South Carolinians, but this was how the campaign was framed by some supporters of the former governor, who sought to mobilize voters for Sanford by warning that Christians were rallying behind his runoff rival, former Charleston County councilman Curtis Bostic. “They are working in many evangelical churches, and they have the respective church leaderships organizing vanloads of their parishioners going to the Board of Elections all this week to vote early,” Sanford’s sister wrote in an e-mail to her brother’s supporters, adding that one man she knew had been “told directly by his pastor to vote for Bostic.”

Well, heaven forbid Christians should vote in a Republican primary, or that anyone should hesitate to forgive Sanford less than four years after he lied to his staff, telling them he was going to hike the Appalachian Trail while instead he flew to Argentina for a rendezvous with his mistress over Father’s Day weekend. You’re a judgmental Pharisee if you think that the former governor — who divorced his wife, paid a $74,000 fine for ethics violations, and was censured by the state legislature — might be less than an ideal candidate to represent the GOP in a special election campaign that is certain to become the focus of nationwide attention.

Such was the sentiment among Sanford’s supporters after he got 57 percent of the vote in Tuesday’s runoff against Bostic, a Marine Corps veteran of Operation Desert Storm who had gained endorsements from Rick Santorum, Ann Coulter, and a number of other conservatives in the two weeks since the March 19 primary. Bostic was nearly unknown until he emerged as Sanford’s runoff rival. The underdog’s success in gaining national endorsements reflected widespread concern among conservatives that a Sanford comeback now could further damage the GOP, already badly demoralized in the wake of the 2012 defeat. “Win or lose, MSNBC will be able to gloat nonstop about Republicans being a Party of the serial adulterers,” Coulter wrote in endorsing Bostic. “Any idiot who votes for Sanford in the runoff is working for the Obama administration.”

About 26,000 such “idiots” chose Sanford as the Republican nominee Tuesday, in a runoff where barely 10 percent of the electorate in the Lowcountry district bothered to vote. What Republicans must worry about now is not Sanford’s conservative critics, but Democrats who are united and fired up about their chances for capturing the House seat in next month’s special election to fill the vacancy created by Tim Scott’s appointment to the Senate. Democrats have nominated businesswoman Elizabeth Colbert Busch, whose TV comedian brother Stephen Colbert has already helped her amass a $3 million war chest for the race. To have her running against the scandal-stained Sanford is a ready-made opportunity for the Democrats and their media allies to revive the “war on women” motif that proved so helpful for liberals in 2012.

Republicans point out that the 1st District is heavily tilted in the GOP’s favor. Mitt Romney got 58 percent of the vote in the district last year, but Sanford will need a lot more than 26,000 votes to defeat Colbert Busch if the Democrats make an all-out effort here in the five weeks leading up to the May 7 election. The Democrats telegraphed their general strategy Tuesday night when a spokesman for Colbert Busch declared, “The families of this district need a representative who they can trust. Mark Sanford simply has the wrong values for our community.”

Ah, “trust” and “values”! Seldom are Democrats able to grasp for that moral high ground, but seldom do Republicans nominate a candidate like Mark Sanford, whom the Washington Post’s Jennifer Rubin called a “conservative laughingstock.” And if Sanford’s supporters were worried about evangelical Christians turning out in force for Tuesday’s runoff, they will face quite the opposite problem in next month’s election. While Sanford and his allies have employed the language of “forgiveness” and “redemption” to characterize the former governor’s comeback bid, the candidate’s 2010 divorce from the mother of his four sons and his engagement to the Argentine woman he called his “soul mate” don’t exactly fit the image of a humble penitent.

Attendees at Sanford’s victory party Tuesday night tweeted out photos of Sanford kissing his new fiancée, Maria Belen Chapur, an image that might not help persuade Christian conservatives to stampede to the polls to elect a Republican whose supporters have quite publicly mocked them and their values. Unfortunately, Jesus could not be reached for comment.