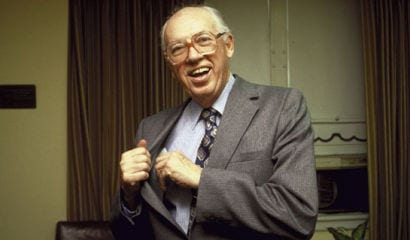 Kudos to Young America’s Foundation (YAF) and Herb Meyer for celebrating a centennial that somehow eluded CNN and the New York Times: the 100th anniversary of the birth of the late William Casey, Ronald Reagan’s director of central intelligence from 1981 to 1987, and one of the most colorful and important figures in precipitating the Soviet collapse and end of the Cold War. The occasion took place at YAF’s fabulous Reagan Ranch Center in Santa Barbara (which everyone ought to visit). There, Meyer, who was Casey’s right-hand man at the CIA, gave a superb tribute (click here), one that is required watching and should be promptly forwarded to friends, relatives, Cold Warriors, children, elderly, university professors, and, most of all, hopeless liberals.

From start to finish, Casey’s career was remarkable. He served in the OSS during World War II, where he ran secret operations from London. He organized more than 100 missions behind Nazi lines. He helped win World War II, the first of two huge victories. Already, by 1945, Bill Casey had done extraordinary things. “He was already one of America’s greatest spymasters,” says Herb Meyer.

And yet, Casey was far from finished. As Meyer notes, “He built an extraordinary career in law, business, publishing, public service…. And at the end of 1980, president-elect Ronald Reagan named Bill Casey Director of Central Intelligence. Five years later, the Soviet Union was on its knees. Four years after that, the Berlin Wall was down. Two years after that, in December 1991, the Soviet Union ceased to exist and the Cold War was over…. As the boys in the Kremlin would have said, ‘This was not a coincidence.’ Bill Casey played a crucial role in helping President Reagan fight and win the Cold War.”

Meyer was special assistant to Casey and vice chair of the National Intelligence Council. He was an intimate eyewitness to the full-court press against the Soviet Union. To that end, Meyer makes a crucial point about the Casey-Reagan approach: prior to the Reagan administration, all previous presidents had approached the Cold War from the perspective that they should not lose. They acted primarily defensively. So long as the Cold War balance/competition was not appreciably worse for the United States after a president’s tenure, the president was generally satisfied with the outcome of his performance and the global status quo. Reagan and Casey changed all of that, and did so with great courage, creativity, confidence, and panache. The difference with Reagan at the White House and Casey at the CIA is that they played not to lose but to win.

As Herb Meyer says, this was an altogether different psychological and tactical dynamic that literally changed everything. For Reagan and Casey, this translated into a deliberate decision to actually attempt to win the Cold War, and their definition of winning the Cold War meant that the Soviet Union would cease to exist.

Reagan and Casey came to an open agreement on that point in a critical executive-level NSPG meeting just 10 days into the start of the Reagan presidency. There, at the White House, on January 30, 1981, the new CIA director and new president informed their principals that the United States had a historic opportunity to do serious damage to the Soviet Union. It was at that meeting that the subject of a covert, strategic offensive against the USSR was first brought up. It was decided that the Reagan administration should launch a concerted effort to play on Soviet vulnerabilities. While the details remained to be hammered out, the initial commitment was made on that January 30, just days into the Reagan presidency.

Thereafter, Casey sought to transform what the CIA had been doing. He and Meyer launched a systematic campaign to identify Soviet economic weaknesses, rather than focusing on and monitoring Soviet (alleged) strengths — as the CIA had been doing. They began conducting Soviet vulnerability assessments, looking for areas where the USSR could be hurt and ultimately undermined.

As Meyer says, it was an extremely gutsy thing to do. It took great boldness and ingenuity.

Notably, not everyone in the Reagan administration — or certainly the CIA — was quite so gung ho. But Reagan and Casey managed to assemble a tight-knit group who were true believers and true searchers for Soviet vulnerabilities. They included Bill Clark at the National Security Council, Ed Meese, Cap Weinberger, Jeane Kirkpatrick, and a few others. They also included indispensable staffers who worked with these senior officials, especially at Bill Clark’s NSC: Roger Robinson, Richard Pipes, John Lenczowski, Sven Kraemer, David Laux, Tom Reed, Ken deGraffenreid, John Poindexter, Paula Dobriansky, Herb Meyer, and many more who deserve recognition.

Among my favorite subplots was the work of Casey and Bill Clark as liaisons to the Vatican. Casey and Ambassador Vernon Walters were constantly flying to Rome in secret missions to meet with Pope John Paul II and his aides. In Washington, a close relationship developed between Casey, Clark, and Pio Laghi, the apostolic nuncio to the United States. “Casey and I dropped into his [Laghi’s] residence early mornings during critical times to gather his comments and counsel,” Clark told me, his biographer. “We’d have breakfast and coffee and discuss what was being done.”

The coffee, for the record, was cappuccino, real Italian cappuccino, long before it became trendy in the United States. But the cappuccino was more than a drink to these men; it was also code language. Clark told me that when he and Casey sensed they needed to touch base with Laghi and the Vatican, they called one another and asked simply (in case the phones were bugged), “Would you like to have some cappuccino?” That meant it was time to meet with the cardinal.

Such intrigue was a routine part of Bill Casey’s daily activity in the comprehensive take-down strategy aimed at the Soviet Union. The man did so much, and knew so much, and only a fortunate few, like Herb Meyer, remain to give testimony to what Casey did and knew.

As Bill Clark has said, “Few of these initiatives were discussed at cabinet meetings. The president made his decisions with two or three advisers in the room.” Casey was often one of the two or three.

Naturally, of course, American liberals despised Bill Casey. And just as naturally, they were united in their hatred of Casey with the Soviet leadership, which understood painfully well that Casey and Reagan had placed a bull’s eye on their empire. The Soviet state-controlled press tore into Casey, calling the former Wall Street investor the “Queens Gangster.” An article in one Soviet publication was tellingly titled, “Untouchable Crook: Political Portrait of CIA Director W. Casey.”

As for Americans liberals, they likewise attacked Casey; they hoped to get their hands on Casey the Untouchable and turn him into a crook. Ever since Watergate, they had lusted for another major scandal, one that might end Ronald Reagan’s presidency. At long last, they were confident that Iran-Contra offered the glistening opportunity, a chance to implement their own take-down strategy, one that would collapse Reagan’s NSC, his White House, and Bill Casey.

Casey died in May 1987, before they got the chance to put him in the dock and destroy him.

Even then liberals didn’t relent. It was outrageous but not surprising that the celebrant at Casey’s funeral Mass at St. Mary’s Roman Catholic Church in Roslyn Harbor, New York, took political shots at Casey during the homily. Casey’s helpless body lay nearby, unable to respond to the leftist priest’s political sermon. But the priest’s bitter words of departure could not outshine the reading of the peace prayer of St. Francis, the singing of “Ave Maria” as the communion meditation, and the eulogy delivered by Jeane Kirkpatrick.

The funeral spectacle was reported at the time by R. Emmett Tyrrell, Jr. in The American Spectator (“William J. Casey, RIP,” TAS, July 1987). Tyrrell noted that the gruff, blunt, cynical Casey would not have been surprised that at his funeral, in the presence of grieving family and friends, “an obtuse Catholic prelate” would rebuke him for (as Tyrrell put it) “adhering to the same values that saved the West from Nazism in the 1940s and have thwarted communism ever since.”

Everyone was appalled, including Ronald Reagan. The mild-mannered Bill Clark, a devout Catholic, was so upset that he wrote a letter to the homilist, telling him it was “totally inappropriate to use the death of a great patriot to spread his own political views.”

Alas, it was a minor injustice compared to great triumph that still lay ahead. In truth, Bill Casey’s good work would not be honored until the next burial service observed by Ronald Reagan and Bill Clark and everyone else in that church, the one Casey regrettably had to miss, even as he helped prepared the corpse: the funeral for atheistic Soviet communism.

It was that death that is Bill Casey’s greatest legacy, one that he and his president foresaw, predicted, and believed they could (and did) facilitate.

Herb Meyer concludes: “Bill Casey wasn’t just a little smarter or a little tougher than anybody else you could put in at the CIA. Bill Casey was a crystal-ball in a pin-striped suit…. He was one of a kind. And we were very lucky to have had him then, when we needed him the most.”

Now that’s a fitting eulogy. Amen to that.