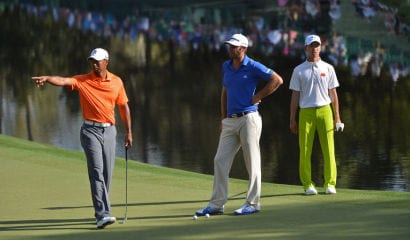 As The Masters begins this Thursday at the breathtaking Augusta National golf course, the recent form of enough top players has been good enough to promise breath-taking competition through Sunday afternoon. Maybe it’s just wishful thinking, but the feeling here is that this tournament could be “one for the ages,” with more Sunday lead changes than in any Masters in history.

Consider all the former major winners whose games seem to be peaking just in time for The Masters.

Tiger Woods (14 professional major titles) already has won three times this year, and six times in just over 12 months. Most frightening for his competitors, he’s putting like a man in a hypnotic state right now, almost unable to miss.

Rory McIlroy (2 major titles) woke up this past week, firing a final round 66 to finish second in San Antonio.

Phil Mickelson (4 major titles) won in near-record fashion earlier this year in Phoenix, then phaded from serious contention for several tournaments… until rising phrom the ashes with a third place at Doral and final rounds in Houston of 67-68.

Jim Furyk (1 major, many close calls) holed out from the fairway on the 72nd hole Sunday to finish third in San Antonio, after a seventh a few weeks back in Tampa.

Padraig Harrington (3 majors) is perhaps the quietest-ever three-time major winner, but don’t count out this bulldog. He tied for ninth to start his season in Phoenix and tenth this past week in San Antonio. Last year in the majors he was 8th at the Masters, 4th at the U.S. Open, and 18th at the PGA.

Angel Cabrera (2 majors) is another of the multi-major winners usually easy to overlook. But something comes over him in majors, where his stellar record (nine top 10s) also includes a tie for the lead at Augusta on the final nine two years ago before finishing seventh. He tied for a solid 16th in his final warm-up event, in Houston.

Stewart Cink (1 major) suddenly is back from oblivion, with a tenth place in the California desert and then a sixth in his last event, in Houston. This Georgia resident tied for third at Augusta in 2008, and might have some home-state karma on his side.

Keegan Bradley (1 major) already has five top-10 finishes this year, including four in a row. Anybody who saw him handle the pressure at the Ryder Cup last fall knows he can’t be counted out — especially since his other major victory came at one of Masters founder Bobby Jones’ two other “home” courses, the Atlanta Athletic Club.

Bubba Watson (one major), defending his title, has five finishes in the top 18 this year in six tournaments.

Charl Schwartzel, who won The Masters just two years ago, has four solid performances in five U.S. tournaments this year, plus won the Alfred Dunhill Championship in Europe.

Plus, among other active major winners, Ernie Els (four majors) has been playing reasonably well lately, Bernhard Langer (two majors) and Fred Couples (one) have been playing well on the Senior Tour, and even the streaky Lucas Glover (one) has shown a few signs of life, as have Webb Simpson (one) and Martin Kaymer (one) — while Graeme McDowell (one) already has three top 10s in the U.S. this year.

And that list of 32 doesn’t even include the world’s fourth and seventh-ranked players, Luke Donald and Adam Scott, both of whom have seriously contended at Augusta before, nor does it include British Ryder Cup hero Ian Poulter. At least one of them should contend as well.

If this lineup doesn’t offer promise for quite a shoot-out, nothing does.

But here’s how I see it: First, for whatever reason, I foresee a Tiger Woods meltdown, with something huge like a 10 on the 13th hole, or somesuch — and Tiger will still finish in the top 10 despite it. I see a past champion such as Trevor Immelman or Mike Weir riding a hot putter to challenge the lead in the first day or two before fading. I see Fred Couples again pulling an ageless routine and staying on the leaderboard well into the third round. I see Sergio Garcia making a serious, serious run for the title, along with Cabrera, Harrington, Mickelson and Bradley.

But the winner will not be anybody I’ve mentioned so far. Instead, it will be a former winner of the Players Championship, a guy with seven other PGA Tour Victories including at Jack Nicklaus’ Memorial and Tiger Woods’ event at Congressional, a guy with nine other international victories, a guy who finished sixth this past week in San Antonio, a guy with three top 10s in the last nine Masters, including two of the past three. He even led the event with eight holes remaining in 2010, before a Mickelson birdie barrage left him in Phil’s wake. His deft short game (ninth this year in the stat known as “scrambling”) allows him to avoid bogeys that would catch other players when they fail to stay on Augusta’s famously difficult greens. This man, always smiling, is hugely popular with the Augusta crowds, and a victory by him would be warmly welcomed.

The only bomb from Korea this week will be the successful dropping of a long putt or wedge shot on the golf course, not a nuke from the sky — and it will come from a friendly and classy South Korean rather than from the North. Next year, the Champions Dinner at Augusta National will be hosted by K.J. Choi.