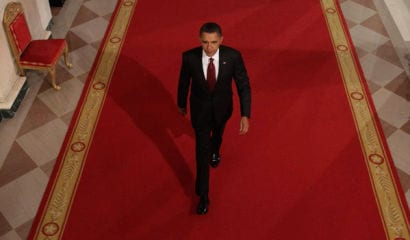 Obama’s not trying to regain Congress, he’s attempting to retain his legacy. Despite the much-reported spin about White House sights being set on retaking control of the House in 2014, it is really aiming at not replaying 2010’s devastating defeat. Obama’s first midterm loss stopped his agenda cold; a 2014 one could hurl it into reverse — and that’s not the way Obama wants to leave office and enter history.

Is the White House so cynical to claim they are grasping at victory, when they are really attempting to avoid defeat? What else are they supposed to say?

No coach fires up the team by telling them to go out there and not lose. In politics, that’s even truer. Supporters don’t invest their resources unless there is a return — donors don’t contribute, activists don’t work, and voters don’t vote. These nonevents are exactly what happened in 2010, when Obama’s base didn’t show up and the Tea Party did.

That midterm loss’s consequences have cost Obama. Yes, he won reelection (by a smaller margin), but all the big parts of his agenda — such as Obamacare and financial regulation — came before his midterm defeat. Since then, his agenda has been stalemated without a House majority to advance it or sufficient Senate votes to break Republican filibusters.

However, stalemate could look good compared to what could come from a 2010 replay. Another resounding Republican victory, especially if it flipped control of the Senate, would more than embolden opposition. It would mandate it.

In 2016, Republicans will be seeking to regain the White House. They can’t do that without making a case against the current occupant. Right now, they have two big cards to play: the economy and the budget. However, these haven’t yet made a winning hand.

Republicans need more and Congress is just the place to get it. Hearings and tough legislation are just two ways they could reshape Washington’s agenda to Obama’s detriment.

Second terms are always tricky terrain for a president. Within his reelection triumph are the seeds of self-reinforcing decline — and they often take root.

The unnatural high coming out of reelection is quickly undermined by reality. An Administration’s best players leave and are replaced by less experienced and less devoted ones. The public wearies of a president they have already heard many times on many issues — he becomes old news. And most likely, he attempted his most popular policy proposals in his first term — leaving second-tier initiatives for his second term.

Confronting these decreasing assets for governing, is usually increasing political opposition. Historically, the president’s party fares poorly in midterm elections, but particularly so in second midterms. These defeats go beyond just a loss of face, to a real loss of political resources when a president most needs them — and just as he becomes a lame duck for his last two years.

Obama is even more exposed than most. Saddled with low economic growth and high federal deficits — and a diminishing ability to blame Bush for them — he is also choosing to pursue a polarizing social agenda as his second term’s centerpiece. His approval ratings in the low 50s at Inauguration are even lower today. And of course, he already has a bad midterm track record — FDR he is not.

Obama has been particularly fixated on his presidential legacy. Perhaps that is inherent in the significant symbolic quality of his presidency. But because of it, Obama seems especially attuned to his presidency being more — he does not want to be remembered as merely a symbolic president.

All presidents are exposed to rapid diminution in their second terms, but Obama is more exposed than most. Little wonder he is publicly professing regaining the congressional majorities he inherited: he is trying to keep from losing much more.