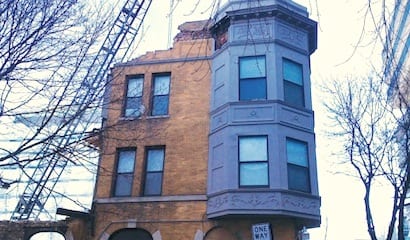 THE ONLY CHICAGO HOME of the only president born and bred in Illinois is now a pile of rubble. Ronald Reagan lived in that toddling town as a young boy, and before the itinerant Reagans moved again, young “Dutch” survived a bout with pneumonia and decided he would become a fireman.

When Reagan visited Chicago in September of 1981, he was not a fireman but our president. “Mr. President,” Chicago mayor Jane Byrne ceremoniously said, “on your return to Chicago, I hereby present you a photo of your Chicago home.”

Looking at the photo, the president became misty-eyed as all the memories welled up inside him. This son of a frequently unemployed shoe salesman from a poor, rough-and-tumble, working-class city had come a long way.

Perhaps no one would have known where exactly Reagan had lived if it wasn’t for the late Chicago conservative godfather Thomas F. Roeser. In 1979, Tom was asked to have lunch with then-candidate Reagan during a layover at Chicago’s O’Hare airport. Reagan fondly mentioned that he had lived in the Windy City when he was around three or four years old. After Reagan’s inauguration, Roeser phoned the White House and through some channels, he got his answer: Jack Reagan was a common drunk. Look it up.

“What struck me about that experience was the comfort that Reagan had living in his own skin, the son of an alcoholic, who suggested that his father’s detention records be looked up,” Roeser later wrote. “Not many successful men—much less the president of the United States—would so voluntarily give out that information.”

Roeser eventually made his way to 832 East 57th Street and knocked on the door. Upon learning that Ronald Reagan had once lived in their apartment, the current residents slammed the door in Roeser’s face.

WHEN DEMOLITION BEGAN a day or so after Easter, yours truly hopped on Chicago’s L train and headed south to witness the final hours of a Victorian six-flat in the Hyde Park neighborhood. I asked a member of the wrecking crew if he knew who had lived in the building whose dust fell on us like snow. “We’re just doing our job,” he said as if reading from a prepared statement, “but, yes, I do know. Reagan.”

I stood before the building for a while and tried to honor its memory. Soon, a fire truck’s sirens could be heard in the distance. They began to overwhelm the boom and clatter of the razing as the truck approached, then dropped off as it sped past. As I was walking away, I grabbed a brick from the rubble. A passerby asked me why I was taking a memento and I told her. “Why are they tearing it down, then?” she asked in sincere disbelief.

It is not as unbelievable to Reagan’s own son, Michael, who tweeted in January that the Chicago home “didn’t mean squat” to his father. Whether or not it did (letters and anecdotes seem to say that it did) is irrelevant. It meant something to our nation.

As Ronald Reagan told the National Catholic Educational Association in 1982, “The immigrants who came to Chicago, the poor in our inner cities, the middle classes struggling to make ends meet—these Americans still believe the American dream.” The Reagans believed in the American dream and themselves struggled to make ends meet in Chicago. It represents the ordinariness of one of our most extraordinary presidents.

There are many rather ordinary presidential sites that have been saved. A home in Buffalo where Theodore Roosevelt took the oath of office is a National Historic Site. The home in Vermont where Calvin Coolidge took his oath is also a Historic Site.

An apartment where our 40th president lived and almost died was worthy of similar protection. But as a Hyde Park Historical Society board member told the Chicago Sun-Times, “Whatever you think of Reagan—once the building’s gone, it’s gone forever.”

Reagan’s legacy is not gone, however. It lives in the town squares of Eastern Europe where statues and plaques and road signs continue to be erected in Reagan’s honor. The University meanwhile promises to adorn the new hospital facility with an inscription noting Reagan’s association with the site, but for a president who won the Cold War without a shot, that simply won’t do.