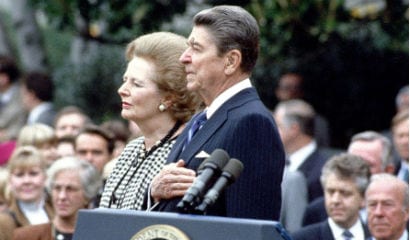 More Politics
Sign Up to receive Our Latest Updates!
Register
Hot Off
The Press
The Right Prescription
Desperate Dems Bet on the ‘Great Replacement’ Scam
by David Catron
A Further Perspective
Was Locke Religious Enough?
by Donald Devine
Politics
Let’s Not Monkey Around With Monkeypox
by Itxu Díaz
Free Speech Under Assault
Speech Controllers Out of Control
by Shmuel Klatzkin
Sunday Report
‘Our Father,’ Netflix’s Documentary About an Infertility Doctor With 94 Children
by George Neumayr

The greatness of Margaret Thatcher is readily apparent to those who honor the conservative principles by which she lived. She believed in rolling back the power of the state, allowing free enterprise to flourish, breaking the stranglehold of organized labor unions, upholding the rule of law, shifting the middle ground of the postwar political consensus, and maintaining her country’s commitments to NATO and the Western Alliance. How she achieved these goals in the socialist environment of 1970s Britain is a remarkable story; most of it comes down to her personality and character.

Lady Thatcher began her journey as a greengrocer’s daughter in the provincial Lincolnshire town of Grantham. Her father, Alfred Roberts, was a lay Methodist preacher involved in local politics. Roberts was a Liberal in the tradition of William Ewart Gladstone, what Americans today would call a classical liberal or a libertarian. A straitlaced, studious, and God-fearing schoolgirl, Margaret Roberts came of age amid the Second World War—a formative experience. In her early years she developed a profound admiration for the United States, whose airmen were stationed around Grantham in large numbers. She also formed a lifelong suspicion of the instinctive German desire to dominate Europe.

A scholarship to Oxford opened her eyes to political ambition within the Conservative Party. She was greatly influenced by reading Friedrich Hayek’s seminal work The Road to Serfdom, published in 1944. Standing for Parliament at the age of 25 in a constituency that had historically been a Labour stronghold, she honed her skills as a campaigner and met her future husband, Denis. From then on she was driven by a determination to climb the ladder of power at Westminster in order to put her principles and her patriotism into action. She loved her country and longed to restore the past glories of Britain’s economic and military strength.

“One man with conviction makes a majority,” Edmund Burke is supposed to have said. Never was this axiom better proved than by the woman who seized the leadership of the Conservative Party at a time when its official name had become singularly inappropriate. A polite account of her failed Tory predecessor, Sir Edward Heath, would say that he sought a middle way between traditional Toryism and the socialism of the Labour Party. A decade of decline left Britain as the proverbial “sick man of Europe,” with inflation running at over 20 percent and militant trade unions calling the shots in many areas of government.

I was elected to Parliament in the depths of this mid-1970s crisis of confidence. It took only a short while to recognize Margaret Thatcher’s gifts as a leader, though in those early days she was not a particularly talented speaker. She often came off badly at the gladiatorial clashes of Questions to the Prime Minister in the House of Commons. But this was not a major disadvantage. What counted was the character breathing through the sentences.

THATCHER SEIZED LEADERSHIP of the party from Heath in 1975 and then defeated James Callaghan’s Labour Party in the 1979 general election. The moment she crossed the threshold of No. 10 Downing Street, Britain’s national decline seemed almost irreversible—but not to her. Against massive opposition she slashed public expenditure, broke a national coal strike, and denationalized a swath of state-controlled industries. In the middle of the domestic crises that these policies engendered, she sent a military task force to liberate the British settlers in the Falkland Islands following their seizure by the military junta of Argentina. She thought she was defending the rights of British subjects against the illegal aggression of a dictatorship. The U.S. State Department, headed by Secretary Alexander Haig, showed a curious ambivalence, making every effort to persuade Margaret Thatcher to back off and find a compromise.

Not for the first time, the bureaucracies of Washington were divided against themselves. Caspar Weinberger, Reagan’s Anglophile secretary of defense, proved a tower of strength to the British military. So did the CIA. With rather more American assistance than was admitted at the time, the Falkland Islands were liberated. Belatedly recognizing the force of Margaret Thatcher’s moral argument against the Argentines, President Reagan eventually swung in her favor. It was the beginning of a partnership that lowered the temperature of the Cold War and eventually won it for the West.

On the domestic front, the so-called “Falklands Factor” established Thatcher’s authority and helped her to win two successive elections. The economy turned around thanks to her dedication to the sound fiscal principles she had learned in her father’s grocery store. She used the rhetoric of the housewife to persuade the nation of the importance of thrift and balanced budgets. She brought the labor militants to heel with lines like “We back the workers not the shirkers.” She had an instinctive feel for the aspirations of blue collar voters, many of whom voted for a Tory Prime Minister for the first (and only) time in their lives.

In the confrontation with the Soviet Union, she and Reagan proved to be a winning team. Together they succeeded in confronting Soviet expansionism by deploying NATO cruise missiles across Europe, despite the staging of massive anti-nuclear demonstrations. While championing Reagan’s Strategic Defense Initiative, she simultaneously opened up a remarkably effective line of communication with Mikhail Gorbachev.

As a bridge-builder between Moscow and Washington, she softened the ground on which disarmament deals could be brokered. She also became an icon of Western freedom to the beleaguered peoples behind the Iron Curtain. The interplay between Reagan, Thatcher, and Gorbachev has not yet been properly judged in the courtroom of history. But all three deserve a favorable verdict for leading the world into a safer era of much greater, although still imperfect, mutual understanding.

Thatcher was short on humor and small-talk charm. Her nickname, “The Iron Lady” (coined in 1976 by the Soviet Red Star newspaper), was as appropriate in Westminster as it was in Brussels or the Kremlin. She took no prisoners with her fierce arguments and passionate advocacy of principles. But ultimately she delivered enormous results. Britain was transformed. The Western Alliance was strengthened. Eastern Europe was liberated. Not all the credit for these stellar accomplishments goes to Thatcher, but without her they would not have happened.

For the last two years I have been immersed in writing a new biography of Margaret Thatcher that will be published on both sides of the Atlantic in October. Its title, Margaret Thatcher: A Portrait in Personality and Power, announces the theme of the book: how, by sheer force of character, Mrs. Thatcher was able to change the course of British history. She also changed, in partnership with Ronald Reagan, the direction of the Western Alliance so that victory was achieved in the Cold War.

A few weeks ago I interviewed Mikhail Gorbachev for the biography. He paid Margaret Thatcher the glowing tribute of saying that her personality and her achievements were greater than those of any other political leader of her time. It was a fitting tribute to a remarkable leader. May she rest in peace.