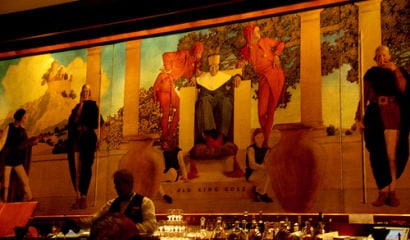 Wednesday
Off to New York on an American Airlines flight. Next to me, by total coincidence, is a man with the same last name as mine. He had a fantastic story. He had come to the glorious USA at age 12 in about 1964. He was from a small Transylvanian village in Romania. His parents were both Holocaust survivors. The Nazi sympathizers in Romania were among the toughest and cruelest in Europe.

He went to high school in Brooklyn, then into the clothing business. He had little money, but amazing intelligence and drive. Now, he is the owner (with partners) of a large chain of clothing stores called “Rainbow Shops.” He employs over 12,000 men and women.

He says he will be hit very hard by the costs and regulations of Obamacare and will have a hard time keeping people employed and happy. He will also be hit by the proposed increase of the minimum wage. He is determined to keep his people employed, but Mr. Obama is making his life — and his employees’ lives — difficult.

What a success story, though. Just amazing. From hell to heaven and bound and determined to allow his employees to have a shot at the golden world, too. He could not stop talking about what a great country this is, and how his success is about America and not about him.

An impressive guy. I wish we were related but we are not.

I watched Skyfall for the twentieth time on the plane. Time well spent indeed. There should be a special monument to Javier Bardem on Sunset Boulevard.

The only bad part of the flight was that even though I was in 3 class first class, all we had to eat was a small salad, a few rolls, and half of a turkey sandwich. Truly disgraceful. A genuine slap in the face.

Luckily, I had my fabulous salted and peppered pistachios so I did not starve.

I was ushered to my favorite room at The Essex House, went out for bagels, and then to a happy sleep.

Actually, it wasn’t happy. I had terrible nightmares of staying at an elegant resort in the Caribbean but I was all alone and lonely and no money and no strength. No wifey, no Julie Goodgirl. Very lonely. I do not want to be old and alone. Or poor. Or ill. No, thanks. Not even at a Caribbean resort.

By the way, how horrible about those murders in Boston. How vicious. I am compelled by the fact that the bombs apparently contained ball bearings. Isn’t this how the terrorists in Iraq and Afghanistan build them?

And also by the way, what about Kermit Gosnell, abortionist murderer? Killing perfectly viable babies, perhaps by the thousands, certainly by the dozens. Why isn’t this a mass murder story in all of the papers and on the network news? How can the media ignore this kind of one man Holocaust on the most innocent among us?

Who was it who said that he “….trembled for his country when he reflected that God is just”? Jefferson?

Thursday
Lunch with my sister in New York. She showed me pictures of her trip to Italy with her family. Suddenly a terrible smell came into the restaurant. Some fools outside were spraying brass cleaning solvent on the brass rails outside. The windows were open. How stupid can you get?

Then to a little diner where my sister told me something that rocked me: she didn’t like Skyfall. Proof positive that she is not my real sister but a clever KGB plant. I have long had my suspicions.

Then a nice walk with my secret agent sister, then a lovely venture into the St. Regis Hotel to visit my old haunts from the days long ago in the sixties when I was at Columbia and my Pop would come up there for meetings. There is a fabulous mural there in the bar by the super famous artist Maxfield Parrish of Old King Cole and his pipe and his bowl and his fiddlers three. How many times I sat with my Pop and looked at that mural. That was when the mural was in a different part of the room.

I should have paid much more attention to my Pop. Who even dreams — when in college — that his father will ever die? How keenly I miss him. Hour by hour and my mother, too.

Then a nap, and then a speech to a fundraising event by a group called the American Institute for Economic Research. It was in honor of the best teacher I ever had, Lowell Harriss, economics prof at Columbia. He has been gone now for several years and he, too, is cruelly missed. He was never embarrassed to say, “I don’t know.”

I brought as guest a young woman who is at Columbia. Her mother is a family friend of long standing, also the child of Holocaust survivors. The student is lovely and charming, but she works way too hard, at least as I see it.

Youth is about work, but also about play.

I drove her back to Morningside Heights, dropped her off at her dorm, then walked on the Columbia campus a bit. I walked to the sundial in the middle of campus where I used to meet my college girl friend, M., for lunch and romance. She is very much alive and a Democrat, but also very much missed because she lives far away in New England.

Time passes so incredibly quickly. Those days of romantic meetings, rocking parties at our frat house, brilliant teaching by Lowell Harriss — those were more than 45 years ago. This is too much. Too much time has passed. Too little is left.

Back on Central Park South I felt sad that my pal W. was no longer nearby to go on endlessly about her various food manias. She’s in Canada now and — again — much missed. Even her long winded talk about her food neuroses is missed. She is a beautiful woman and I wish she were here.

“Too much coming and going,” as my grandmother used to say.