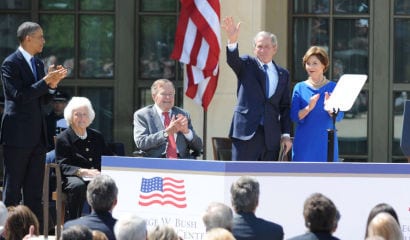 DALLAS — Absence, they say, makes the heart grow fonder. Maybe not outright, rapturously smitten but anyway fond; and fonder and fonder still, it may prove, as the calendar puts distance between the present day and the presidency of George W. Bush.

We shall see. I can report developments on that front already — from rising approval levels shown in a new national poll, to the exuberance of 10,000 people spread across the SMU campus as the George W. Bush Presidential Center came to life Thursday.

Well, let me back up: 9,990 or so might have been exuberant. President Barack Obama, along with Democratic predecessors Bill Clinton and Jimmy Carter, were on hand for the occasion: behaving pretty nicely as it happened but clearly scrounging for evidence of agreement with their presidential brother Bush 43.

All three Democrats praised Bush for his administration’s commitment to fighting AIDS in Africa. Clinton and Obama spoke of their personal liking for the man. Clinton praised his successor as “disarmingly direct” — a nosegay no one ever tossed in his own direction. Obama sang of Bush’s “incredible strength and resolve” after the 9/11 attacks, an observation all the more poignant as coming only 10 days after the nation’s second terrorist attack, in Boston.

Presidential library dedications are odd affairs anyway — emphasizing a bipartisanship rarely on view in the great Colosseum known as Washington, D.C., where political gladiators would as soon eviscerate each other as pretend to anything like philosophical agreement. Everyone who speaks on these dedicatory occasions has on his best Sunday suit and bears evidence of a healthy scrubbing behind the ears. No one lays a glove on anyone, or for that matter attempts to.

The oddities of the Bush Library dedication at Southern Methodist University on a resplendent Thursday morning — e.g., Dick Cheney in a cowboy hat, a frail George H.W. Bush propped up in a wheel chair, Hillary Clinton silent — were peripheral to the bigger show.

The Bush Center — all 226,000 square feet of it (barely smaller than the Reagan library) — flings down in a manner of speaking the gauntlet to Bush’s opponents, some still as obstreperous now as they were five or six years ago. I don’t mean to depict Bush as charging forth from the library breastworks with lance leveled, skewering his critics, including those with honest (as opposed to purely partisan) objections to his policies. What the center does, with striking and yet tasteful effect, is lay out the case for a controversial presidency, inviting visitors to judge for themselves.

One striking feature of the Bush museum’s offerings is an interactive video board highlighting the considerations that indicated action of one sort or another on Iraq, the troop surge, Hurricane Katrina, and the financial blow-up of 2008. The invitation is open to visitors: Here’s what I knew as president, here’s what I did. What about you? Would my way be yours, or would you strike out in another direction? Fine either way; your choice.

I didn’t get to try it, so much there was going on all around us media drones as we trudged through the hall. I think the experience could all the same be called challenging.

To my own mind – working in sync, I anticipate, with the minds of thousands who will see the same sights, the same exhibits — the centerpiece of the museum is the 9/11 exhibit. The terror and horror of the moment are very much on display here: inviting comparisons with the terror and horror of the Boston bombing. A beam from the south tower of the World Trade Center at the point of impact rises jaggedly from the floor. The name of every 9/11 victim is chiseled into the limestone wall; it makes for emotional reading, even though I hadn’t known a single one of the fallen. The Fanon bullhorn Bush used in spontaneously rallying a Ground Zero crowd is on display.

So much, from that historical point, went south: mistakes, arguments, controversies, misappraisals, bad judgments, the rekindling of liberal anger at the candidate who had “stolen” the 2000 presidential election.

Who knows how the Bush presidency would have turned out but for al Qaeda? Barack Obama, gazing out over 10,000 upturned faces in Dallas, might easily have entertained similar questions about the course of his own presidency in the aftermath of Boston. Obama’s disinclination to abolish the Bush apparatus for fighting terror — Guantanamo and so on — is a datum that may already have sunk silently into numerous brains, not all of these brains Republican.

Governing a complex and rambunctious place like the 21st century United States seems to some of us oldtimers a more and more challenging enterprise all the time: bidding to become a near impossibility. Anchorage of some sort is needed. It helps — a lot — to see and hear at the Bush Center repetitive admonitions concerning the unsurpassed value of freedom.

“My hope,” said Bush on Thursday, “is that the United States of America must try to expand the reach of freedom” — which, after all, is “a gift from God.” Among the gifts of freedom, the former president emphasized — and wouldn’t he know? — is disagreement. Or worse: being called a liar and a loser by the likes of Harry Reid; being yelled at, cursed, caricatured by bloggers as well as the uptown intelligentsia. What keeps Bush going? I barely know the man myself; the many who know him better point to a kind of inner serenity that bids him, in the immortal words of Davy Crockett, “Be sure you’re right, then go ahead.”

The current Bush approval rating of 47 percent –a seven-year high, as reported by the Washington Post and ABC News — puts him approximately at eye level with his celebrated Dallas guest, Barack Obama. It’s quite a comeback in four years’ time. The Man Who Wasn’t Clinton in 2000 is for quite a few now The Man Who Isn’t Obama: maybe not the finest figure of a president you could ever imagine and maybe not the worst either. Maybe far from the worst.

We do go through these cycles of presidential reappraisal, such as blunt, outspoken Harry Truman’s rescue from ignominy during the depths of Nixonian trickiness. Those wishing to reappraise, or perhaps genuinely appraise for the first time, President George Walker Bush have now a spectacular place in which to pursue the task: lots of iconography, naturally, but a lot more honesty than such as Harry Reid would find plausible in a family man and patriot we used to be assured was a loser.