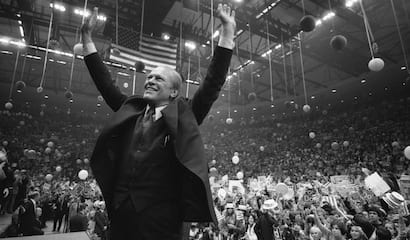 Saturday
Here I am at my desk at the Garage Mahal of our house in Beverly Hills. I’m writing a speech, or rather brief remarks, about our 38th president. I am going to be on a panel about him in Grand Rapids, Michigan, on Monday.

Probably the most graceful, athletically gifted, disciplined man ever to sit in the Oval Office—yet portrayed as clumsy in the national media.

Probably the most familiar with how the legislative process works in the House of Representatives in the 20th century, brilliant law student, top quarter of his class at Yale Law School while working at a demanding job—yet portrayed as a man of limited gifts by the media.

A man of complete incorruptibility—yet viewed as party to a corrupt bargain under which he agreed to pardon Richard Nixon if he became president.

Someone with a great knack for organization, yet portrayed as a figure of fun.

But this man was a gift from God as our 38th president.

He had the most sincere self-confidence of anyone I have seen in the White House in my lifetime except maybe for DDE. He did not get into politics to prove anything to his mother, nor to show how cool he was, and certainly not to make money or attract women.

He entered public life because he considered it a duty to serve his fellow Michiganders, and then his nation, and then the world. Once in public life, he made many more friends than enemies. Even though he was almost always in the minority, he managed to get his points and his principles across superbly, and to become a force whereby the ideals and mores of the men and women of Grand Rapids became imprinted upon the nation.

He faced impossible challenges: Indochina (especially Cambodia), a strange and hitherto unseen economy, and a nation reeling from inflation, war, and infighting. And like a bridge over troubled waters, he laid himself down for his country while operating with modesty, self-effacement, and the solid trustworthiness of the Michigander he was.

Sunday
GRAND RAPIDS, Michigan. I flew in here tonight and felt pretty darned good as soon as I got to the Gerald R. Ford Airport. Manageable. Friendly locals. Pleasant, normal-seeming folks. Not like the crazy-looking people in LAX. People who look like they do not want to hurt anyone and are perfectly happy with their lives. Regular, clean features.

I did go to a drugstore for cough syrup and the clerks looked totally nuts, with immense piercings on their faces. But they were friendly.

I am here for a celebration of the centenary of Gerald R. Ford, a great man. I briefly worked for him and he was kind and considerate. It is incredible to me that he lost to Jimmy Carter. I guess I have already said that. Sorry.

At the fabulous Amway Grand, I had the same room I have had here three times in a row. I love this room. Quiet. Great view over the Grand River and its many bridges. Super air conditioning. I watched Lockup, my favorite show, about life in some wretched prison.

Prison is too tough. I don’t think it’s meant to be torture. Confinement, yes. Deprivation of liberty, sure. But constant fear of death? Or homosexual rape? That does not sound to me like what prison in the United States of America is supposed to be like. Where did the idea come from that prison should be hell?

I took a shower and lay down to a really peaceful sleep. I cannot exactly say why, but I love, love, love Grand Rapids, and I love this hotel.

Monday
NOW THIS IS HOW life should be lived.

I awakened at a leisurely hour, watched TV, got dressed, had my usual toast, and then went across the street to listen to a talk by Henry Kissinger. This is one smart guy.

He talked about how the big problem with Europe was that the European Union had taken on many of the powers and duties of the state, but the citizens of the EU did not feel sufficient loyalty to sacrifice for the future of the EU.

He didn’t talk about the whole idea of ethnicity and state having a big connection, but he should have. Italians are of the Italian ethnicity. Naturally, they feel more allegiance to the Italian state than to, say, Montenegro. This will be a continuing problem.

Same thing in the Middle East. The Jewish people are hated by many Arabs. I don’t know what kind of political settlement can change that.

A great deal of human conflict is about ethnicity. That used to be well-understood. Now it’s not allowed to be stated. I guess I’ll get yelled at for saying it. I’m not saying it’s right. It’s just the way things are. Where this leaves America at this moment, only time will tell. I had probably better not even mention it.

I can tell you that we had a super dinner event tonight. It was, like the luncheon, for the Gerald Ford centenary.

An award was given to the great guru of foreign policy Brent Scowcroft, who gave a fine short speech. Then we had dinner. I sat with Steve Ford, my old marching companion Paul O’Neill, who used to be deputy head of OMB when I was a lowly speechwriter and who is a genuine genius, like Aram Bakshian and John R. Coyne, Jr. I also sat with Frank Zarb, who had a huge job with Ford and before that with Nixon, and then went on to be a major-league power on Wall Street.

We all talked happily.

Then I was on a panel with Bob Schieffer of CBS News, a genuinely great guy, along with Steve Ford and former Ford chief of staff and Bush 43 vice president Richard Cheney. We all shared reminiscences and opinions about Mr. Gerald Ford. I talked mostly about how graceful and kind he was. I especially praised his pardoning of Mr. Nixon—an act of self-sacrifice and supreme love for the nation.

We all talked about how smart he was—top quarter of his class at Yale Law School, which, I can tell you, takes some doing (probably better than I did until my last year)—and what a great sense of humor he had.

I felt great being on that panel.

Then the U.S. Army Chorus sang “Ol’ Man River,” “What I Did for Love,” “God Bless America,” and “The Battle Hymn of the Republic.” Giant screens showed scenes from Gerald and Betty Ford’s lives.

I noticed as the slides were being shown that Steve Ford was crying. He is a remarkably fine man. I hope to see a lot more of him.

Then the evening was over and I went back to my room.

Gosh, this has been an emotional day. The centenary for Nixon in January was wildly emotional as well.

I am a sentimental fellow. How I miss those Nixon/Ford days. Long ago and far away. Like being in a very good fraternity. Like being in the Alpha Delta Phi at Columbia, 1963–66. Happy days. Now my only frat brothers are on the phone or online, except for Phil and Chinich. Sad. I guess I have my 12-step brothers and sisters, so that’s good.

Will we ever have another pair of men in the Oval Office with vision like Nixon and Ford? Yes, I think so. But who and when?

Tuesday
I GOT UP at the fabulous Amway Grand, got dressed, had my meager breakfast, and walked on a lovely footbridge over the Grand River. There on the other side was the Gerald R. Ford Museum. They were having a festival because of Mr. Ford’s centenary. Several lovely women were passing out free birthday cake. I went to watch the video of the day Richard Nixon resigned. There, as usual, are my parents standing right in front of Nixon, torn to pieces with grief. I was torn up too, remembering the tragic day, recalling my parents, burning up with emotion about the crucifixion of the peacemaker.

But Gerald Ford was such a great president that some of the loss was recovered. Solid. Incorruptible. A man of peace. His compassion and patriotism were beyond question, and his caring toward the Nixon family was miraculous. This Gerald Ford had great big steel balls.

Then to the airport. It was spotlessly clean, with cheerful, lovely women, all with red hair, at the TSA checkpoint. It was heaven. Sweet people with sweet faces. Is this what America all used to be like far from Atlantic Avenue and Flatbush?

On the long flight from Detroit to LAX, I sat next to a young man who is about to get married, a friendly fellow named Scott Hedges. I tormented him by showing him photos of my dogs, but he took it well.

I did not cough once on the whole flight, and now that I am back in L.A., I am coughing again.

Did I tell you that on the short hop from Grand Rapids to Detroit there was a staggeringly beautiful young woman in a long black dress? She is 17 and is heading to Kenya to do missionary work. She will be hosted by a pastor from a church connected with her father’s church in West Michigan. Her father is a pastor too.

“What denomination?” I asked. “Lutheran?”

“Well, Lutheran is Christian,” I said.

“Well, have you ever heard of Martin Luther?” I asked.

“Is he in West Michigan?” she asked.

“Is he that Martin Luther guy?”

We are really in trouble.