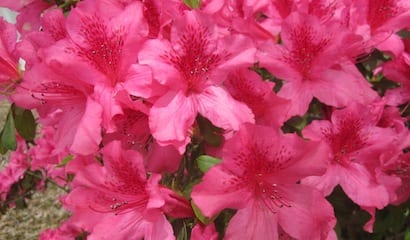 It’s summertime, and though living might never truly be “easy,” at least in Mobile, Alabama, it certainly is pleasant. Far more so than it was during my last stint in the Washington, D.C., area, where my wife and I resided before moving back to her coastal hometown two years ago as summer began.

While three sojourns in greater D.C. (for five years each) in the past three decades left me with a lasting fondness for the nation’s capital, its drawbacks provide a perfect foil for explaining why life in the hinterlands is so much better. Unlike in greater D.C., the traffic here isn’t godawful. People can have entire conversations without obsessing on politics. You’re far less likely to come in daily contact with egomaniacs who exude self-importance with every breath. And most people in service industries speak English here—and, more importantly, they smile while doing it.

For leisure, I can get to public tennis courts or an excellent public golf course in fewer than 10 minutes, or suffer the indignity of driving about 14 whole minutes to reach the local outlet of the famous Robert Trent Jones Golf Trail. Or, if I am so inclined, I can reach a good fishing spot in fewer than 20.

Springtime here is an explosion of color that puts even the verdant Washington area to shame. Not for nothing is this city famous for its “Azalea Trail,” with its pinkish “Pride of Mobile” strain of that flower—just one among numerous that bedazzle residents and visitors alike. Winter avoids the seemingly endless months of nasty-cold grayness. Summers actually aren’t any more sticky; they just remain hot and humid for a few weeks longer.

Here on the Gulf Coast, people can really cook. It’s not just that the influence of New Orleans (my native town, two hours away) seeps over to coastal Alabama. It’s also that families less burdened with horrid commutes have more time to prepare real meals worthy of the name and sit down together at the dinner table.

In church on Sundays, little children remain quiet. Their parents teach them not to spend services chatting and gurgling and eating (or playing with) Cheerios. And when just a little older than toddler age, they are far more likely to simultaneously engage with adults and yet maintain a respectful attitude. It’s called “manners”—and maybe it comes from spending more time with parents (who also make sure they don’t look unkempt) rather than with nannies or in daycare.

In ordinary life, people can speak freely and without irony about loving our country. And we just assume that free enterprise is the fairest and most productive system. Then we live free enterprise, rather than treating it as an academic discussion. People here (apart from my writerly self) spend their days not moving around e-papers or cyber-dollars or other financial exotica, but producing or transporting real goods: lumber, industrial supplies, steel, concrete, aircraft, and naval vessels.

Sure, we’re a little too apt to turn Crimson Tide football into a quasi-religion. But that’s okay, because we’re also far more likely to practice real faith and take it seriously than are the supposed sophisticates up East. And at least we come by our Tide love naturally, as part of the warp and woof of life, and not like those adoptive and too-insistent Washington Redskins fans who weren’t born anywhere near the mid-Atlantic Coast but feel a desperate need to shoehorn some local enthusiasm into a non-native existence.

We don’t talk in government acronyms, we don’t assume we can retire at 55, and we don’t pay half a million dollars (indeed, not half that) for even a semi-decent family house. But we do know there’s a lot more to life than frantic labor for billable hours, and that home is more than just a place to sleep.

Today I slept a bit late. I dawdled somewhat over breakfast. I read a little bit of the Wall Street Journal. I took a detour to a mailbox to send a bill on its way. And I still was at my office about seven minutes after exiting my front door, a few minutes before 9 a.m., relaxed and ready to ply my ink-stained trade. There’s a lot of work to do, but plenty of time to do it. And above the green, green trees outside my office window, the skies really are so blue.