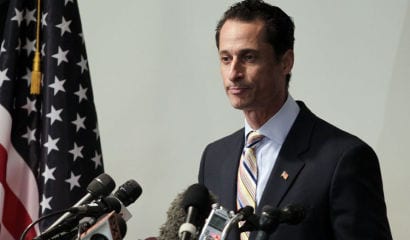 Anthony Weiner had it all. Had. And will never have again.

As a powerful progressive congressman who never had a serious election challenge before 2010, he was considered the heir to Senator Chuck Schumer’s throne. He also had an early lead for the 2013 mayoral election–a position he had been vying for since his 2005 defeat in the Democrat primary.

And with one tweet it was all gone. Despite Weiner’s ambition to rise again to become New York’s mayor, the electoral and demographic math simply isn’t there.

Politics is a tribal business. It’s the sport of trying to amalgamate different tribes, whether they’re based on a common race, sex, class, creed, location, or culture. In New York City, those circumstances are amplified greatly. Each borough has entirely different cultures, and heritage, income levels, and educational achievement separate neighborhoods.

Anthony Weiner is a man without a tribe.

His former district was made up of mostly working-class and middle-class Italians, Irish, and Poles, as well as a large population of Jews, mostly Ashkenazi but also containing a significant Sephardic population. More Orthodox and Russian Jews lived in the Brooklyn portion of his district, while there is a split between Reformed and Orthodox in the Queens part.

The Jewish populations, especially the Orthodox, have for the most part disowned Weiner. In 2010, he came to nearly a draw against a Catholic Republican, Bob Turner, in the Brooklyn portion of the district. They would vote for Turner by a two-to-one margin in the special election in 2011 following Weiner’s resignation against another liberal Jewish Democrat, David Weprin.

Orthodox and Hasidic tend to be very socially conservative, which conflicts with the entirety of Weiner’s personal and professional life. Some Orthodox also questioned his dedication to the tribe after his marriage to Huma Abedin, a Muslim, was officiated by a Protestant, Bill Clinton, on Shabbat.

Without them, the scandalized former congressman has few places to go for support.

The minority vote is not up for grabs in the Democratic primary. Bill Thompson, the former New York City comptroller, will win much of the black and Hispanic vote. Thompson has already received significant endorsements from Bronx and Brooklyn politicians. He also has a very favorable relationship with the Hasidic Jewish communities throughout Brooklyn.

John Liu, the current comptroller, will be receiving a heavy amount of support from New York’s Asian community, and remains popular with some Staten Island Democrat organizations.

Running to the left of Weiner is Bill de Blasio, the New York City public advocate. He is the candidate of progressives as well as organized labor, including, most notably, the mega-union SEIU. New York Communities for Change and the Barack Obama Democratic Club of Upper Manhattan have also endorsed him.

The only groups that could still support Weiner are moderate liberals, upper-class yuppies, non-religious Jews, and working and middle-class gentiles. Many of these groups have seen their numbers dwindle, having either died out, or been displaced by changing neighborhoods and the high cost of living in America’s largest city.

In order to win a Democratic primary outright, a candidate would need 40% of the vote in the first election. That seems unlikely to occur. No candidate is polling at even 30%.

What Weiner and all the other non-Quinn candidates are hoping for is a run-off where they can run to the left of Quinn.

But is there support for Weiner to even place second? The once strong population of liberal New York City Jewish voters, which would have been a kingmaker for the lone Jewish candidate several decades ago, are no longer as relevant.

The Weiner campaign belongs to a different time. To paraphrase from Enoch Powell, Anthony Weiner’s career, like all political lives, will end in failure.