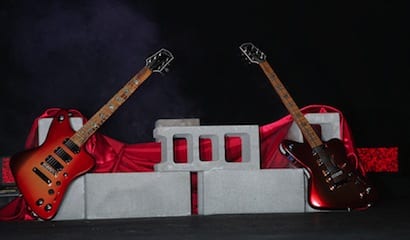 NASHVILLE — Henry Juszkiewicz and Christian Martin run competing guitar-manufacturing companies, but their politics have nothing in common.

Juszkiewicz, CEO of the Tennessee-based Gibson Guitar, is a Republican who donates heavily to party candidates, including Mike Huckabee.

Despite their partisan differences, Juskiewicz and Martin have something in common — both of their companies import the same type of exotic wood to manufacture guitars.

The federal government considers this activity questionable and raided one of the two companies.

Take a guess as to which one.

A chorus for you if you answered Gibson.

Federal agents, under the auspices of the Department of Justice and the Department of the Interior, raided Gibson’s offices in Nashville and Memphis in 2011. They said Gibson broke the law by violating the 100-year-old Lacey Act, which regulates the importation of exotic wood from Africa and India.

U.S. Rep. Marsha Blackburn, a Republican who represents Tennessee’s 7th Congressional District, including parts of Nashville, is demanding that President Obama explain why the feds targeted Gibson in the first place.

She has yet to receive an answer, said her spokesman, Mike Reynard.

“In light of the IRS coming out and saying they were targeting conservative groups, this obviously raises a lot of questions as to why Gibson was targeted when other guitar makers using the same wood weren’t,” Reynard said.

After suffering a raid that generated plenty of negative media coverage, Gibson settled with the government. Gibson officials agreed to pay a $300,000 fine and contribute $50,000 to the National Fish and Wildlife Foundation.

Juszkiewicz settled in order to avoid a lengthy trial that would have cost the company millions of dollars, according to a statement on Gibson’s web site

Several attempts to reach Gibson officials, including visits to its two Nashville locations and e-mails sent to Juszkiewicz and three of his primary assistants, were unsuccessful.

According to Juszkiewicz’s earlier statement, however, federal agents carried weapons and wore SWAT gear during the raid. They forced company employees out of the building, shut down production for the day and seized company assets.

Such extremes were completely unnecessary, Juszkiewicz said in a statement released after the settlement.

“The government used violent and hostile means with the full force of the U.S. Government and several armed law enforcement agencies costing the taxpayer millions of dollars and putting a job-creating U.S. manufacturer at risk and at a competitive disadvantage,” Juszkiewicz said.

According to the FEC’s web site, Juszkiewicz has donated almost $11,000 to various Republican candidates such as Blackburn and Tennessee Sen. Lamar Alexander.

Martin, meanwhile, has donated almost $40,000 to several Democrats since 2001, mostly in Pennsylvania, not to mention John Kerry’s 2004 presidential bid and the Democratic National Committee.

Politics not a factor, feds say

Tennessee Watchdog contacted Justice Department spokesman Wyn Hornbuckle, who requested we submit all questions in writing, via e-mail, which we did earlier this week. Hornbuckle did not respond to any of the questions, nor to a follow-up e-mail sent the following day.

Chris Tollefson, a spokesman for the U.S. Fish and Wildlife Services under the Department of the Interior, told Tennessee Watchdog that politics were not a factor in the raid.

“There is absolutely no evidence that politics was involved,” Tollefson said.

“Career agents carried out the raid in accordance with standard procedures that we and other federal law enforcement agents have, and we carried out this investigation after receiving referrals from Customs and Border Protection in both 2009 and 2011. We did not have any information regarding Martin or any other musical instrument manufacturer at the time.”

Given that Tollefson phrased his last remark in the past tense, Tennessee Watchdog asked if his agency has learned any new information about Martin Guitar.

“I don’t have any information. I am not comfortable talking about Martin, specifically. In general, there are ways to import this wood in compliance with the law. In the case of Gibson, that was not happening.”

Tollefson denies that federal agents carried out the raid in a SWAT-like manner, as Juszkiewicz described.

Tollefson said he and other federal agents consider the matter closed after the settlement.

“To clarify, as a matter of policy we cannot confirm or deny whether we have (or have had in the past) open investigations involving Martin Guitar or any other entity or individual, until and unless charges are brought.”

In an e-mail, Martin Guitar spokesman Joe DePlasco would only say that his company imports the exotic wood legally. He would not answer any other questions.

Blackburn does not consider the matter closed.

“It is clear that this administration made a choice to use excessive regulatory methods to intimidate conservative groups and individuals who disagree with their political ideology,” she said in a statement. “Not only is this wrong, but it is illegal. No one should have to live in fear of their government.”

“She has heard from a number of people in her district who feel like they were inappropriately targeted. These are people who have received letters from the IRS.”

Reynard would not say whether these people also donated to Blackburn’s campaign, were involved in tea party groups or were possibly targeted for other reasons.